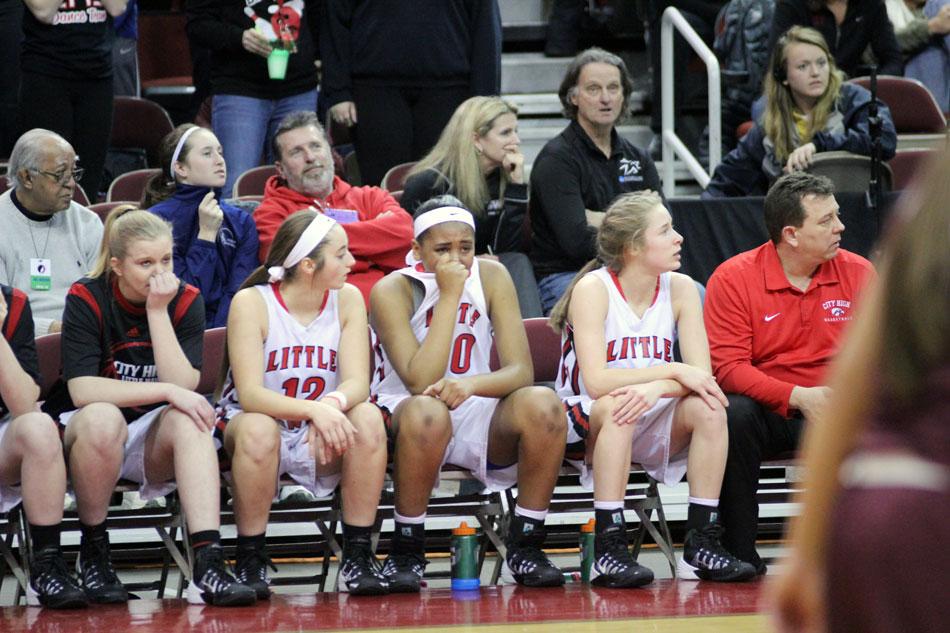 At just the wrong time for the girls basketball team a polar vortex hit Wells Fargo Arena. A second half slump in which the Little Hawks’ offense went cold resulted in the only loss City has seen all season as they fell to West Des Moines Dowling Catholic, 44-49, Friday in the semifinal of the state tournament.

In the first quarter, it was obvious the game would be a battle of two defenses. Neither team scored for the first few minutes and City held Dowling from scoring until the final minute of the first quarter. The Maroons played a much more physical game than many teams this season and were able to interrupt the team’s offense in this way.

“The physicality worked to our disadvantage,” head coach Bill McTaggart said. “That’s the way it goes sometimes, so I give credit to Dowling they’re a good defensive team.”

The Little Hawks lost the lead for the first time in the fourth quarter during the Maroons 11-0 run which ultimately dug a hole too deep to climb out of.

The Little Hawks were led by Kiera Washpun ’14 with 15 points and Courtney Joens ’16 with 14 points. Florida recruit Haley Lorenzen ’14 who has been the team’s strongest offensive threat throughout the season was double and tripled teamed during Friday’s game, making it difficult for her teammates to get her the ball under the basket.

“[Lorenzen] has carried us so many games and she helped us get to the semifinal,” McTaggart said. “I just feel bad that it wasn’t her best game all year, but she’ll have a great career at Florida.”

The girls end their season 24-1 and McTaggart hopes his team will be able to see beyond their semifinal loss to acknowledge all the accomplishments they’ve made this season.

“It’ll be a period of time before it sinks through,” McTaggart said. “It’s too bad we couldn’t get the whole thing done, but I think down the road they’ll realize how special they were.”