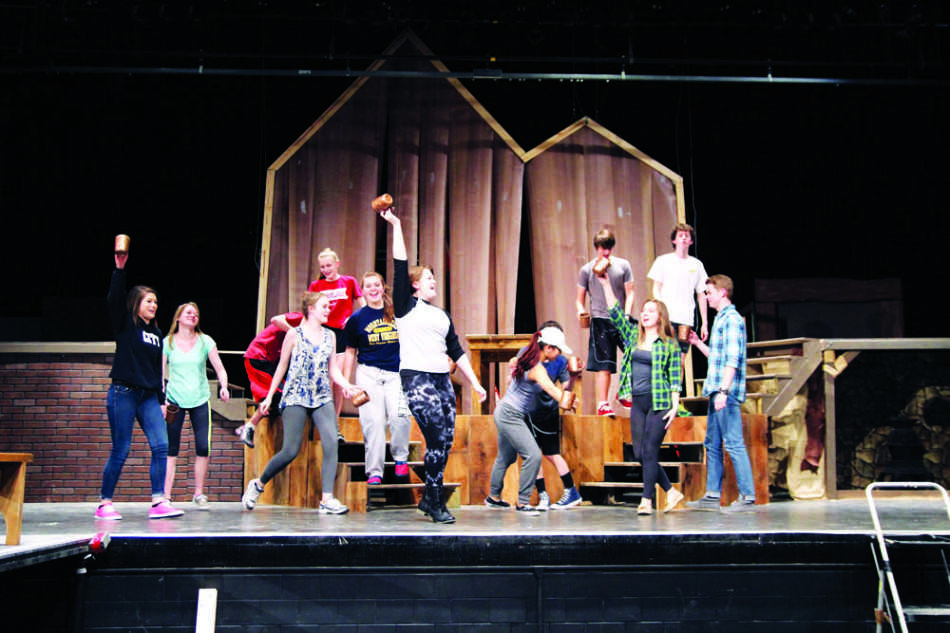 With less than ten days till showtime, the cast and crew gets ready to pull together this year’s musical Oliver! Darker than musicals of the past, Oliver! deals with abandonment, murder, and mistreatment of youth in London during the 1800s. Amy Ostrem ‘14, plays a key role as Nancy, a woman abused by her boyfriend Bill Sykes, played by Elijah Jones,’14.

“You have to dig really deep,” Amy Ostrem ,‘14, who plays Nancy, said. “You have to really understand the emotions of an abused person.”

“Bill is a brooding, angry, and mean character,” Jones said. “I am there to cause people harm.” Jones explains that Sykes is that hidden personality in everyone, and that it has been fun exploring.

The cast practices regularly after school rehearsing choreography, songs, and other scenes. With a much bigger cast, Oliver!’s provides a unique balance between the characters, said Jones. “It’s hard to say that there’s any real lead roles in the play, they all come in and establish their role, and when they’re done, they’re done,” Jones said on his opinions on the characters. Ostrem also believes the roles to be interesting, stating that its been a challenge to provide the right emotions.

“She’s so in love with someone,” Ostrem said on her role. “She is so involved with other people, she never pays attention to herself.”

Troy Peters, the director of the musical, chose the play because of the large number of featured roles. “ We’ve given more people the chance to shine,” Peter’s said. “We’ve even gender swapped some roles.”

When casting for Oliver, Peters realized the challenge of finding the right voice and image for the titular character Oliver. “He is supposed to be a small boy who sings soprano, and we couldn’t find anyone to fit the category.” Peter’s said. After scouring through several candidates, they settled on Andy Stewart, an eighth grader from Northwest. “We looked for a small boy the voice and the experience, and we made the best choice for the play.”

Peter’s decision to cast younger actors for most child roles was a decision that stood well by the cast.

“They’re trying to make the play as real as it can be.” Ostrem said. “Andy plays a perfect Oliver, I think it was the best decision.” Jones also thinks Stewart is a serious actor that gets the job done. “Andy’’s great, he’s very talented and has a great work ethic.”

Ostrem said City High is the perfect place to produce Oliver. “ It involves little kids and welcomes community members. It’s a good show for everyone.” Oliver appears in Opstad Auditorium on April 24-26, with student cost being $6, and adults costing $12.