The girls tennis team won all of their meets this past week, each against a Cedar Rapids team. 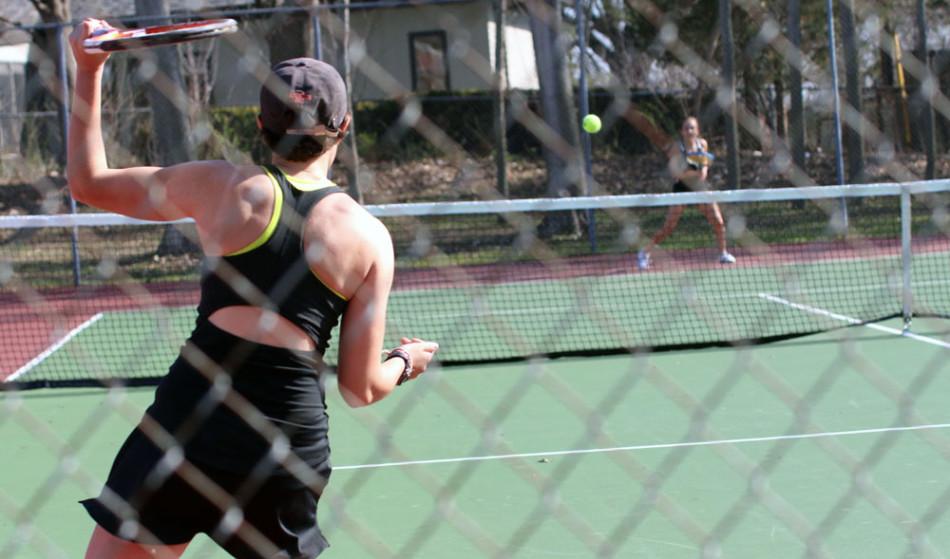 The varsity girls tennis team redeemed themselves this past week after early losses in the season. They beat Cedar Rapids Jefferson 8-1 and sweeped Cedar Rapids Kennedy 9-0. In addition, a close win against Cedar Rapids Prairie improved their conference score to 4-1.

“I believe that we worked as a team and everybody put everything on the line. We understood that each match counts as one point,” said Pedersen. “I think that’s the general philosophy of the team. Everybody went out and gave it their best effort.”

City played two teams this past Saturday, facing CR Jefferson in the morning. The meet was scheduled to begin at 9:00 am, but Jefferson arrived late, giving City extra time to finish warm-up and relax.

The top 4 players finished their matches quickly, sweeping their opponents 10-0. Nos.5 and 6 finished shortly after, only dropping one game in each of their matches. With all six singles matches won by City, the team had already won the meet.

With No.1 Eve Small ‘15 sitting out, No.3 Susanna Gianola ‘16 stepped up to play at No.1 doubles. Consistency from Gianola and Innes Hicsasmaz ‘16 allowed them to defeat CR Jefferson 10-0.

Rebecca Storey ‘15 and Alyssa Forgy ‘15 were teamed up at No.3 doubles. Despite consistent volleys at the net, Storey and Forgy trailed Jefferson by three games and struggled to close the gap, losing 10-7.

The team returned to the courts to play Kennedy in the afternoon. Small battled against Kennedy’s No.1 Jessica Peterson. Their match was full of long points and rallies, but Small remained patient, waiting to hit winners. Peterson’s consistency was no match for Small’s deadly groundstrokes, and Small won 10-0.

Solid wins from all six singles matches guaranteed City another victory. With a score of 6-0, the team was fueled by excitement and confidence going into doubles. Gianola and Kit Finley ‘15 used their consistency to defeat Kennedy at No.2 doubles, and deadly net-play from Small and Hicsasmaz helped to win No.1 doubles. City overpowered Kennedy, winning the meet without dropping a single match.

On Tuesday, April 22, City faced its hardest opponent yet: Prairie.

“I had been nervous about this meet for an entire week,” shared Pedersen. “It was very important that we beat Prairie.”

Certain problems needed to be addressed before starting the meet. Gianola forgot socks, a vital part of a tennis player’s outfit, but her teammates banded together and helped find her a pair. Injury added even more pressure, as Small was suffering from shoulder pain and was contemplating sitting out of the meet.

“It was a tough situation,” said Pedersen. “She wanted to sit out, but the type of pressure that would put on the rest of the team, everyone having to move up a spot, I couldn’t let her sit out. Then we would have definitely lost.”

Small fought through a few difficult first games, trailing 2-1. After a talk with Pedersen during a changeover, Small made a huge comeback, winning the next nine games in a row.

“I told her to quit whining and start playing tennis,” said Pedersen.

The rest of the singles matches left City and Prairie fairly equal, putting even more emphasis on the doubles matches. With a loss at No.3 doubles and a win at No.2 doubles, the meet was tied up 4-4. It came down to No.1 doubles.

“It’s always exciting to be the deciding match,” said Small. “Everyone’s watching and the pressure’s on.”

Small and Hicsasmaz started off strong, giving themselves a cushion of 4-1. However, multiple double faults and missed returns helped Prairie recover. At 8-8, City needed to win the next two games to avoid going to a tiebreaker. With strong serves and consistent returns, Small and Hicsasmaz put enough pressure on Prairie to gain a two-game lead and win the match 10-8, earning City its fourth win of the season.

The team sees defeating Prairie as an important victory, but they are intent on improving even more.

“I feel like we’re improving a lot, but there’s still room to grow,” said Maria McCoy ‘15. “Hopefully we can do even better next time against Prairie.”

The team faces West High on April 29 at 4:00 pm at the Hawkeye Tennis and Recreation Complex in Iowa City. They will be playing alongside the boys varsity tennis team.