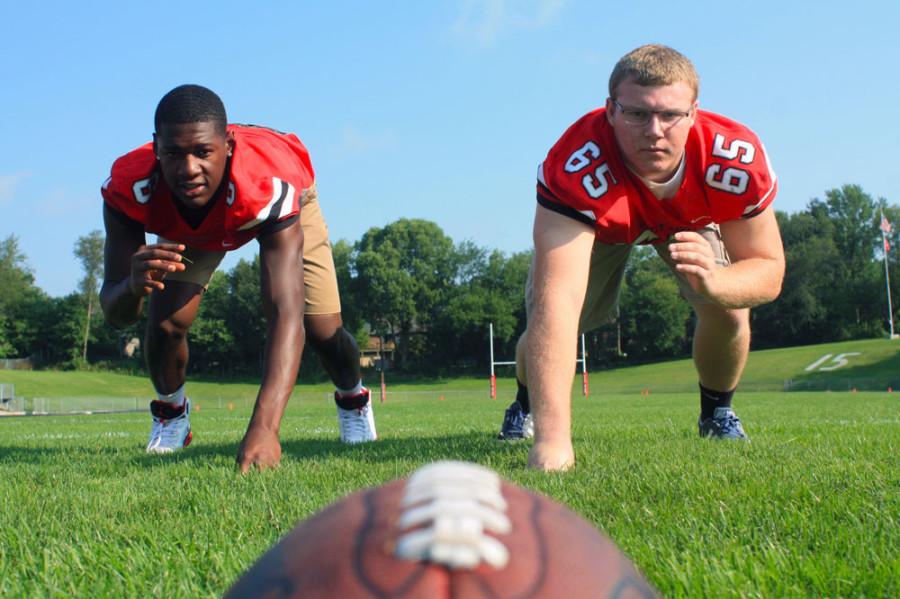 Defensive linemen. The mobile wall that stands in the way of the opposing team from advancing up the field. Their purpose: to attack. And sack the quarterback. And to spill plays, and to reroute tight-ends, rip past fullbacks, occupy offensive linemen, and disrupt anything else that might enter their line of sight. And they have to do it quickly.

This year, both of City High’s varsity captains are standout defensive linemen: Eric McDonald and DeJuan McKenny, class of ‘15.

“We’re the ones who set the table,” says McKenny. “We’ve got to be animals out there, be vicious on every play.”

McDonald is a returning defensive tackle and McKenny, who switched from a linebacker position in 2013 to defensive end, are coming off of a charged season last year – with the help of athletes like Jake Leohr, and Matt Kroeze, who accumulated 51 and 47 tackles each, respectively.

Even with Leohr and Kroeze off to college, McDonald and McKenny are confident that they can get the job done.

“It’s just a hole that’s gotta get filled, that’s all there is to it. Either somebody steps up into it or we don’t win games,” says McDonald. “Leohr was an exceptional athlete, but I believe that DeJuan can fill the hole.”

Tonight’s game against Cedar Falls stirs up the memory of a 13-14 loss against the Cedar Falls Tigers in the 2013 season opener. The game plan for the defensive line is simple: to bounce back from that defeat by meeting Cedar Falls’ intimidating offensive line with just as much aggression and energy.

“Having both captains as D-linemen means that our D-line is going to kill it,” adds McDonald. “There’s no other alternative.”

Despite each high school football game averaging about 11 minutes of action, the amount of energy put into preparation is apparent. Both McKenny and McDonald spend hours a week watching plays online.

“There’s a big mental part to the game, because you gotta stay focused or else you’re not going to play as well as you want to,” says McKenny.

Both seniors, McKenny and McDonald are determined to make their last season memorable.

“I do it for my teammates, I do it because I want to be the best,” says McKenny.

“People really believe in me and think I can do great things,” adds McDonald. “I’m gonna go out there and do it for them.”

With a younger and more inexperienced team than last year, McKenny sees tonight’s game as a test run.

“We just have to stay focused and stay positive,” says McKenny. “We’ve been improving in practice, working hard as a team. Our hard work will pay off.”
“I just think about what I can do to get this done and that really gets me motivated,” says McDonald. “Like, you know what? I can do this. I have the confidence, I have the ability. I’m just gonna go out there and do it.”