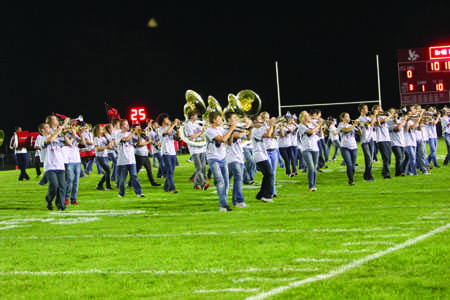 Capes and masks are not usual attire for the everyday marching band, but the Little Hawk Marching Band is taking their theme to heart.

“It’s kind of one of those themes that I knew the type of music I wanted, and I used the mask to connect them together,” City High Band Director Ryan Arp said.

The 2014 halftime show is titled Behind the Mask.  It is superhero themed and will feature popular songs from Batman, Zoro, and Disney’s The Incredibles.

“Fans should expect a dynamic performance. Lots of highs and lots of lows. Lots of louds and lots of softs,” trombone section leader Ryan Dailey ‘15 said.  “It’s very exciting music that moves the soul. You actually get the sense that there’s a superhero while listening.”

“We’re not really sure if we’re going to get them in time for this next game or not,  but they are a considerable upgrade from what we had in the past,” Arp said.  “The old ones were a majority white while the new ones are a majority red. We are very excited about them.”

To many students at City High, the band is a very important part of the school.  Boosting spirit, the band plays a vital role at City High sporting events.

“I always enjoy being able to watch the bands performance during halftime,” Luke Milefchik ‘15 said. “It provides a nice break from the action and gets you pumped up and ready for the second half!”

Arp states that the realization that the band members are performing the entire time they are on the field is an important step in the learning process.

“I like it when the kids get the whole thing on the show and it starts to make sense to them about what they’re doing and their performing,” Arp said. “That’s what I always like to see.”

As time moves on, the future only seems bright and very exciting to Dailey.

“Hopefully with our performance it will inspire people to do greater things as we remind them of the heros that they grew up with as kids,” Dailey said. “To do greater things. To go beyond themselves and make a difference!”