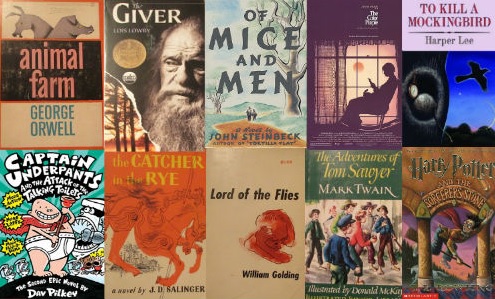 Over the past decade, over 5,099 books have been challenged in the U.S., meaning that a person or group tried to remove materials from a curriculum or library. The majority of opposers being parents and legal guardians. And although their goal is to protect young adults against controversial material like sexual content or abusive language, many avid readers complain that censoring authors can inhibit the growth of ideas and intellectual liberty.

“While I respect people’s rights to read what they wish,” Daphne Foreman, City High English teacher said. “I am a fan of intellectual freedom, I believe that our education system is predicated on the idea of equal access and academic freedom.”

Another City High english teacher, Ali Borger-Germann, believes that while it may be hard to talk about books with sex or racism, their value is in the conversation that such topics generate.

And while literature is commonly derived from many of life’s lessons, Mollie Hansen ‘17 believes the line between arguable and inappropriate reading material runs thin.

“Some of the more sensitive topics shouldn’t be discussed in class, if a majority of people feel uncomfortable with it,” Hansen said. “Even other subjects, that some people feel sensitive with, I think those should be addressed with caution, but they can still be addressed.”

But in some cases, guardians decide many ideas cannot be address and ban several books from schools, districts, and institutions.

Over-banning of books poses a serious dilemma for teachers creating their classes’ curriculum, but in Iowa City, having parents or students challenge books is a rare occurrence.

“I’ve had parents request that their child read an alternate text, but I’ve never had a parent say outright that they think something shouldn’t be in the curriculum,” Borger-Germann said of her classes. “ I feel like we’re a pretty open community, and when there is a situation where somebody thinks ‘I can’t have my particular kid read that text,’  they’ll usually just take it up with a teacher.”

And as many people do take it up with their teachers, they don’t realize that these teachers can feel uncomfortable confronting racy topics too.

“Every time that we start reading Of Mice and Men, when I read aloud the way that George speaks to Lennie,” Foreman said. “They’re words that I wouldn’t use, in my context, but in the context of the book and discussion, they’re valuable.”

The opinion that banned books have valuable context is shared unanimously among the facility. To contribute to these well known writings, once a week, every year, City High joins the nation to celebrate Banned Books Week, a favorite among English teachers.