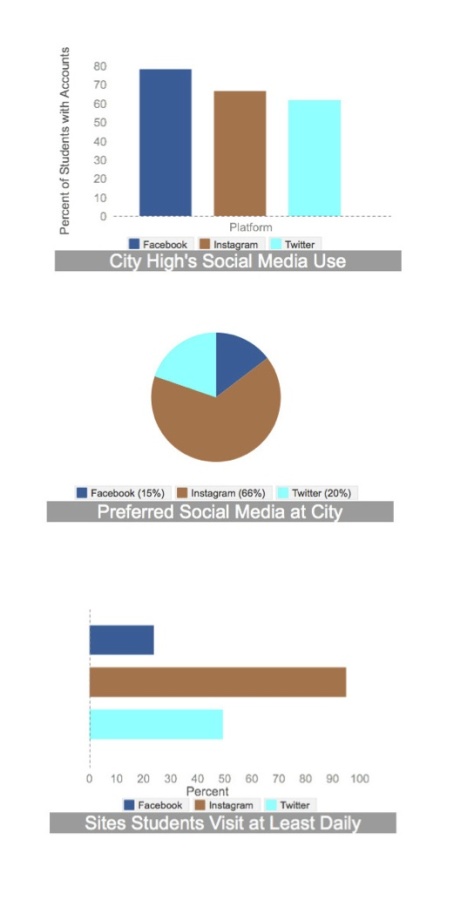 Just a few years ago, Facebook was the most popular social media site in the world. Today, however, more and more teenagers are deleting the app from their phones and logging out for good. And growth, particularly among high school- and college-aged people, is declining — but not as rapidly as it may seem.

Chris Snider, a Drake University professor in the School of Journalism and Mass Communication, has observed that trend himself.

“I think the decline in Facebook’s popularity is among young people,” said Snider. “Among teens especially.”

Emmett Adamson ‘16 used to be an avid Facebook user. Recently, though, he has moved on from his once-favorite site.

“Literally every time I didn’t have something else to do, I would go on Facebook,” Adamson said. “Then a while ago, I stopped using it by my own choice. I would be lying in bed at 10 p.m., scrolling through my newsfeed on my phone, just because that’s what I did every night, and one day I just realized that I was not having fun.”

Adamson is not alone. 20.2% of City High students with Facebook accounts say they never use the site. However, Facebook’s decline may not be as dramatic as it seems to some. Claire Chapman ‘16 still uses the site regularly.

I would be lying in bed at 10 p.m., scrolling through my newsfeed on my phone, just because that’s what I did every night, and one day I just realized that I was not having fun.”

Although Chapman uses the site less than she once did, she attributes the decline to her life, rather than disinterest.

University of Iowa professor Brian Ekdale has noticed his journalism and mass communication students moving away from Facebook.

“I’m teaching a large-lecture course, and there are 200 students in there,” Ekdale said.  “And I really get the sense that most of the people in that room either aren’t on Facebook, have quit Facebook, or it’s just not the social network they see as most important in their lives.”

“Facebook is the most valuable [social media site] to me in terms of my personal life and people I know,” Snider said, “Just to keep up with friends and relatives I don’t live near.”

“For the most part, I use Facebook to share pictures of my daughter with family and friends who wouldn’t necessarily have another outlet for seeing them,” Ekdale said. “I don’t produce as much content for Facebook any more.”

As more and more social media platforms flood the Internet, it’s easy to forget how successful Facebook was, and continues to be.

“I can’t say everybody is on Facebook, but so many people are,” Ekdale said. “The range is from young to old, from rich to poor, from American to around the world. [Facebook] did what they wanted to.”

I can’t say everybody is on Facebook, but so many people are. The range is from young to old, from rich to poor, from American to around the world.”

So what accounts for the mass migration of teens to other sites?

“I mean, I know the reason why I stopped using Facebook, but unless it’s just the same reason, I don’t really know why other people would stop,” Adamson said. “Maybe it’s just to be cool, like a hipster thing.”

Trends certainly play a role in the rise and fall of any piece of popular culture.

“I would say that things have their trends, they have their peaks,” Chapman said. “Just like Myspace, how people kind of got bored with it and switched to Facebook. I imagine that will continue.”

But Facebook is only losing ground with its teenage audience; with adults, it’s still the top social media platform.

Adamson has had the experience Snider described.

“My mom uses Facebook a lot,” Adamson said. “She’s always telling me about posts she’ll make about me, or pictures of me, and she’ll be like, ‘Oh my God, Emmett, look, this many people liked this picture of you!’ And she thinks it’s really fun. It’s just more appealing to that age group now.”

“Facebook bought Instagram, and that’s the most popular network among teenagers, so that’s a big strategic move by them,” Snider said. “We’re going to see Facebook launching a lot more apps, some of which will be targeted at a younger audience.”

With 94.9 percent of City’s Instagram users visiting the app at least once a day, the photo-sharing platform certainly seems to have recaptured the younger audience that Facebook is beginning to lose.

“I use Instagram because it seems like more fun,” Adamson said. “It’s a good way to make yourself look cooler than you actually are.”

Other, newer platforms are also beginning to gather followings among younger audiences.

“Anonymous apps like Yik Yak [are] catching on in high schools and colleges,” Snider said.

Another platform, Ello, is being touted as the ad-free anti-Facebook.

“There’s a new social network out being promoted more as the privacy-friendly version of Facebook,” Ekdale said. “And it is getting some notice, but then I looked at it and said, ‘Geez, do I want rebuild all my networks from scratch on it? I don’t know if it’s worth the effort.’”

“One of the things with Facebook is because it has such a wide, large user base — that’s a blessing and a curse,” Ekdale said. “The curse is that it’s losing younger users. The blessing is that if another social network comes out, people will look to it and say, ‘All my friends are on Facebook. I don’t really want to start from scratch.’ And I think that is something that will give Facebook some longevity.”

According to Snider, Facebook is aware of the advantage it has, and it’s already using it to plan for the future.

“We’re going to see Facebook launching a lot more apps, some of which will be targeted at a younger audience. They launched a Snapchat-like app called Slingshot. And they have an anonymous app in the works,” he said, “They’re trying.”

With its enormous presence and its plans for the future, is the loss of the youngest demographics enough to drive Facebook to extinction? Not likely, according to Ekdale.

“I don’t think, a hundred years from now, we’ll be talking about Facebook,” he said, “It’ll be something completely different. But it’s hard to know when that will be and why that will be.”

Adamson also doubts that Facebook will disappear any time soon. 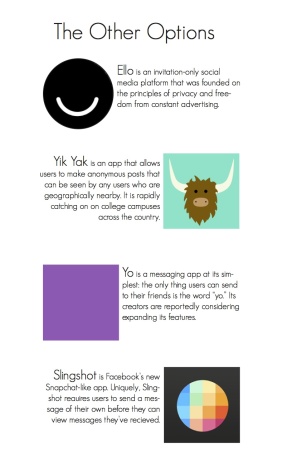 “I’m sure people will always use [Facebook], because it’s a really useful website,” he said, “But a lot of people have just turned off to it.”

Though Facebook is clearly seeing a decline in use by young people, it’s far from dead. So what will happen in the world of social media as Facebook fades and new platforms crop up?

“[People] are starting to move on to either the new thing that comes on the market, or they find the platform that fits their interests,” Ekdale said, “If they’re into photography and sharing images with their friends, they’re much more an Instagram crowd. If they’re curating various things, they might like Pinterest. But in some ways, it’s just a moving target. They move from Facebook to Twitter to Yik Yak and so on. It becomes a much more fragmented environment than it was maybe five years ago, when Facebook really was the most popular.”

So far, no clear replacement for Facebook has emerged.

Ultimately, the decline of Facebook may not be as dramatic as it seems to high schoolers. But that doesn’t mean the world of social media still evolving.