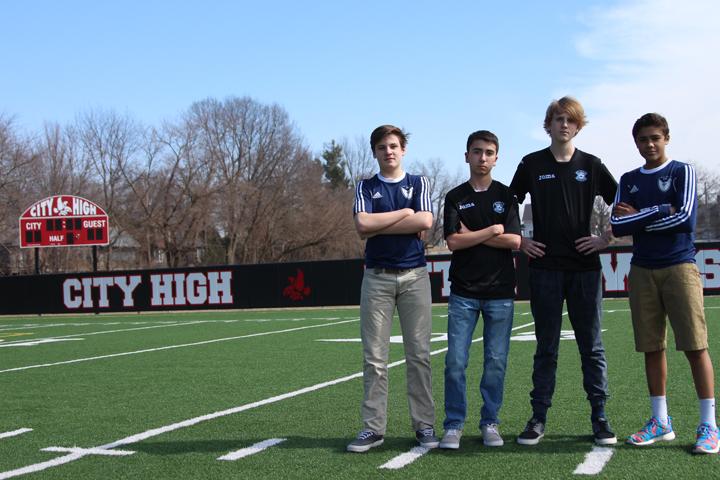 For years ISC and Alliance have been Iowa City’s elite soccer programs. With great competition comes a great rivalry and each time these players get on the field together, they’re out to dominate. For the first time this high school season, instead of being on opposite sides of the field, these club enemies will all be wearing the same red jersey, sweating together, playing together, and all working for a mutual goal.

“Our rivalry shouldn’t be a problem at City because most of us are pretty good friends in school,” freshman ISC player Jackson Meyer said. “It’s only in soccer that we get tough on each other, but that’s just because it’s a competitive environment on the field.”

“It kind of sucks that the junior high schools don’t have soccer, but it also made me more excited to be able to play in high school.” John Clark said.

For most players, this first year of high school soccer is the first time they will experience a crowd at every game. Players would agree that it’s mostly soccer moms for the fan base at club games, but in high school, groups of students often come out to see the game.

“It’s going to be pretty cool, we used to play with like 10 fans and now we will have a lot more,” Cameron Chavez ‘18 said. “I imagine a huge crowd at the City vs West game and it will be a huge rush to play with a lot of fans.”

Along with not being used to a big crowd, most club players are not used to playing with kids 3-4 years older them. Although, some club members have gotten some experience with the older kids, players will have to adjust to size and height differences.

“In ISC, we have been around and been playing with older kids for a long time,” Jonah Dancer ‘18 said. “But in high school it’s going to be a whole new level of play. It’s going to be a lot more physical and each player is going to need to be aggressive to be successful out on the field.”

Incoming freshman have been preparing for the new level of play by attending open gyms and getting used to the veteran members.

“It’s really good to go to the open gyms, to show you want to be part of the team and just meet all the people you are going to be playing with,” Meyer said. “It’s not anything like tryouts, you are sitting out a lot, it’s not necessarily a place to showcase your skills, it’s more of a place just to get comfortable with the environment.”

Tryouts are the week of spring break and the season begins the following week.