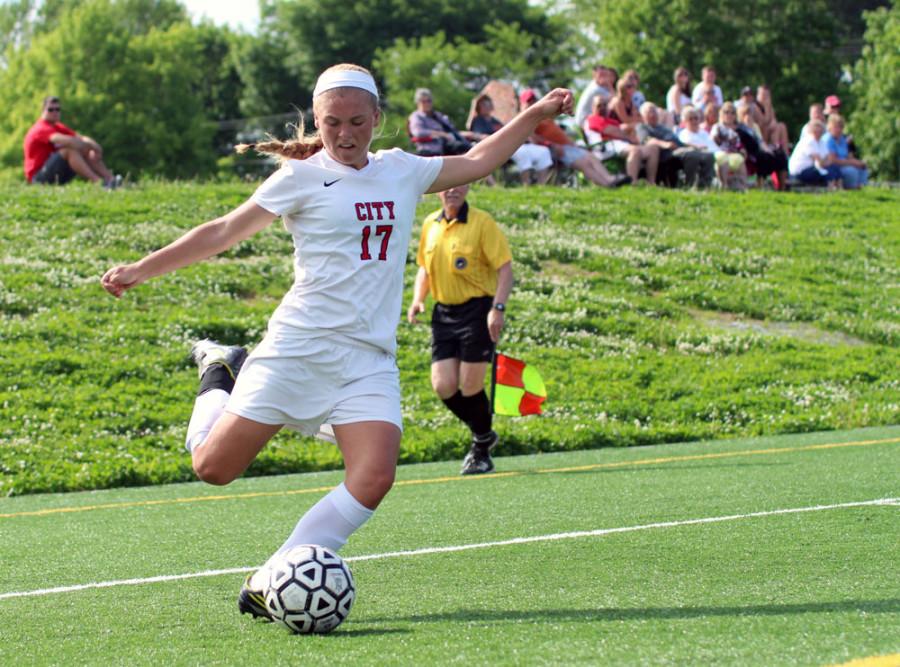 For the girls’ soccer team, the 2015 season is an opportunity for redemption- last year’s journey to State ended abruptly as City fell to West High in the first round of Regionals. They ended the season with a fairly even conference record of 6-7.

“We did decent,” center-back Lizzy Ward ‘16 said. “There were definitely some games that we should have won but we didn’t.”

This will be the first year with new head coach Michael Prunty.

“I am a teacher first and foremost and my goal is to prepare my players to solve the many problems the game presents,” Coach Prunty said. “I am a brand new coach to several of the girls and that will always challenge players. We have met that challenge of change head-on and talked about being comfortable with learning new concepts.”

Prunty seems to have adjusted just fine to City High and its players.

“I like him. He works us hard. Practices are very focused and everyone gives it their best,” Ward said.

With only two freshmen and two seniors on varsity, the team is comprised of mostly returning juniors and sophomores, with quite a few new players coming up from JV.

“We just have a lot of girls who haven’t played at this level of competition,” Ward said. “I think that is going to be an adjustment for most people.”

Forward Syd Schroder ‘17, who played on varsity as a freshman last year, agrees with Ward about the challenges that come with lack of experience.

“We really need to work on possession and keeping it, not making passes that are really risky,” Schroder said. “I know that last year, when I got the ball, I was really frantic. I wanted to get rid of it so I wouldn’t mess up. But when you’re on the field you have to be comfortable with the ball.”

Another problem facing the team is the amount of dual athletes that play other sports during the spring. Six varsity players are also a part of the City High track team.

“Track is rough because [girls who do track] miss practice, which affects the whole team because we’re not as united,” Schroder said.

Prunty sees this challenge as an opportunity for the team to improve as a whole.

“Missing players is part of athletics and we need to have players prepared to step up with the ‘next girl up’ mentality,” Prunty said.

Among the team’s long-term goals are winning the MVC title and making it to State. In the meantime, they want to focus on improving possession and communication during games. The Little Hawks’ first step towards these goals starts this Saturday, as they face off against defending State Champions North Scott.

“North Scott will provide a great opportunity for several players to be challenged in a game environment against a successful program,” Prunty said. “It gives us a chance to finally play against someone else besides ourselves. Saturday will reveal a lot about where we are as a team.”

The team plays North Scott on Saturday, April 4th, at 10:00 am at the City High turf.