A look into the life of a family on the other side of the vaccination controversy.

In the first month of 2015, there have been more cases of measles than there are on average in a full year. In addition, about 1 in 10 children in Iowa don’t receive all recommended vaccines. 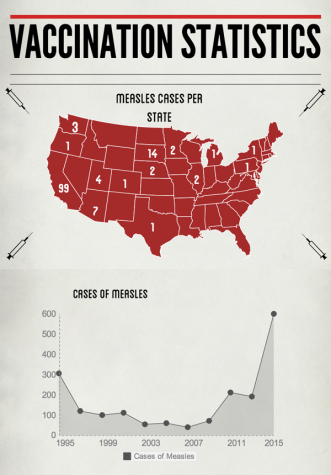 These facts follow a sudden controversy over a gradual decrease in children’s vaccinations across the U.S. This downturn is propelling many parents to wonder the reasons behind parent who don’t want to immunize their children, and whether their children are safe in an environment of unvaccinated students.

The vaccination feud has left most parents picking sides, but has also stirred a new opinion on the subject: individualized medicine.

Bergman has been cautious about injecting her children with vaccines since an early age. Prenatal, she researched pregnancies and proceeded with a natural birth.

“I felt strongly that I didn’t want to give my child 5-7 different injections of disease within hours of their birth,” Bergman said. “I wanted to at least delay a little while-maybe a couple of days, to check their health.”

Bergman also wasn’t convinced that the benefits outweighed the risks of vaccinating her children.

“I just wanted to find out more, and I knew that I had the luxury of living in an area that didn’t have polio, and that many of the other diseases that they vaccinated for were not likely to kill my child,” Bergman said. “And I also lived in an area where my child was not exposing other elderly or young people. There was really low likelihood that she would be a carrier that would infect another person.”

Additionally, Bergman felt that it was important that she let her children develop immunity through other means, such as exposure, before she got them vaccinated. However, when she moved from Colorado, where one can get a personal belief exemption, to Iowa, where only exemptions for religion and health exist, Bergman felt that she had to make a choice.

“I felt really strongly that it was important that they have the opportunity to develop their immune system naturally,” Bergman said. “I wanted to space out their vaccinations but we moved to Iowa and I had to choose, all or nothing.”

Bergman eventually chose not to have her children vaccinated at all, instead opting to keep them at home when they or their friends were sick.

“I’ve always been really big on paying attention to their symptoms and not medicating their symptoms, so if they are running a fever or showing any signs immune compromise, I make sure that they stay home,” she said. “Not only am I quarantining them from my community, I’m giving them days to rest and eat well and cut out all sugar, and let their body deal with the pathogen and become stronger through their own natural immunity.”

Now, as her children are growing older, Bergman is having them decide what to do about vaccines going forward. Her daughter, Maya Bergman-Corbet ‘15, is starting to make decisions about her vaccine status because of college.

“Nobody has ever told me that vaccines are a bad thing, like it’s not like my mom ever said, ‘Oh, vaccines are evil and modern medicine is evil,’” Bergman-Corbet said. “It’s just that it wasn’t really necessary for us at the time.”

While Bergman-Corbet has never gotten a severe sickness from a disease she wasn’t vaccinated for, she is cautious in the company of other people.

“When my brother had whooping cough, I didn’t babysit for three months,” Bergman-Corbet said. “If I’ve been exposed to something, I’m not going to go hold this three month old baby. You just use logic.”

Considering vaccination is a controversial topic, Bergman-Corbet is hesitant to talk about her beliefs.

“I don’t talk about it a lot because mostly people say, ‘you’re dumb. Why wouldn’t you get that,’ Bergman-Corbet said. “But I’ve never had anyone confront me about it.”

While some people view vaccinations as purely a health issue, Bergman is also concerned about the political side of the debate.

“My standard concern is that I think that we need individualized, personal medicine and health care,” Bergman said. “My sort of political response is that not all the same vaccinations on the same schedule is right for all people, so politically it’s a big ‘con’ the way that vaccinations are done now, particularly in the state of Iowa.”

Bergman believes that the state should allow more options for people who want more choices in how they receive health care and vaccinations.

“I don’t agree with the concept of herd immunity. I think that it creates a false sense of security,” Bergman said. “I think that it should be a basic human right to choose your own medicine and health care.”