Vinyl Denial: Meet the Band that Played at Prom 2015 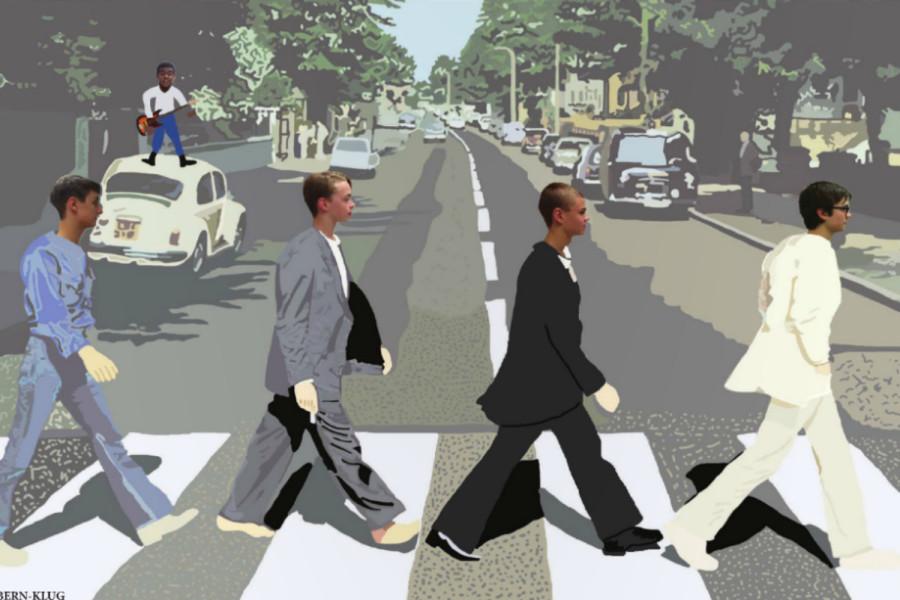 Emmet Adamson ‘17 walks on stage. Accompanying him are three other musicians: a drummer, a guitarist, and a bassist. All four dressed in tuxedos, the audience wonders what new special act the show choir spring show has brought before them. Adamson, nervous, sings two magic words: “Day tripper.” And the crowd goes wild.

“People told me it was the best special act of the night,” Adamson said. “Even someone’s little brother came up to me and said it was their favorite.” People began comparing them to the Beatles, with the similar wardrobe choice of all tuxedos. The following Monday morning Adamson was asked to perform at Prom 2015.

“Immediately, I was like ‘Hells yeah,’” Adamson said. “I mean, I wasn’t going to decline.”

Adamson was approached by Christine Lewers, a co-advisor for the junior class. Lewers explained that she had trouble getting live student bands before, and that this was a first in her career.

“It’s a big commitment,” Lewers said. “These kids are all bringing their own equipment, and it’s taking time out their prom. It adds a whole new layer of complication to their day.”

After the invitation, the four invited Levi Pugh ‘18 into the band as the pianist.

“Tony wanted me to join for the special act,” Pugh explained. “But I had no idea what the music was, so I just backed off at the last minute.” The new addition to the band brings their total to five, a number they all agree with.

Jake Parker ‘16, the lead drummer, says he prefers performing in such a small band.

“It’s so much easier for me,” Parker explained. “I can trust these guys to go off, and I can screw a little around and go my own way. It’s really great.”

After the feedback from the Spring Show, they’re confident that they will live up to their last performance.

Tony Soberanis-Fern ‘16, the lead bassist, said the experience was one he would never forget. The crowd, he explained, was one of the best parts of the show; he’s hoping for another loud night at prom.

“It was pretty freaking  awesome,” Soberanis-Fern said. “I think the louder the crowd is, the better of a time everyone will have.”

Performing under the name Vinyl Denial, their line-up includes an opener of “Fire,” by Jimi Hendrix, an as-yet undecided Beatles tune, and a fan-favorite closer of “Day Tripper.” The group  began to practice once a week after they agreed to perform at prom. However, time is one thing that is keeping them apart. Cody Owens ‘16, the lead guitarist, says that their conflicting schedules often cut into their practice time.

“We try to practice, but we all have full schedules,” Owens said. “And with the musical, getting everyone together has been hard.”

Parker and Pugh were both members of the pit orchestra for the spring musical Mary Poppins.

“It’s honestly hard as hell. Especially now with tech week, it’s really stressful to find times we are all available,” Parker said. “And that makes practices with these guys a lot more complicated, since they’re are all so busy.

Even given the time constraints they’re operating under, the band plans to put on one of their best performances yet at prom.

“When I went to prom last year, I felt like this is what it was missing. It was just a DJ last year, and no live anything,”Soberanis-Fern said. “Not to knock DJs, but I just think they’re not that good. Nothing can beat good, old-fashioned music.”