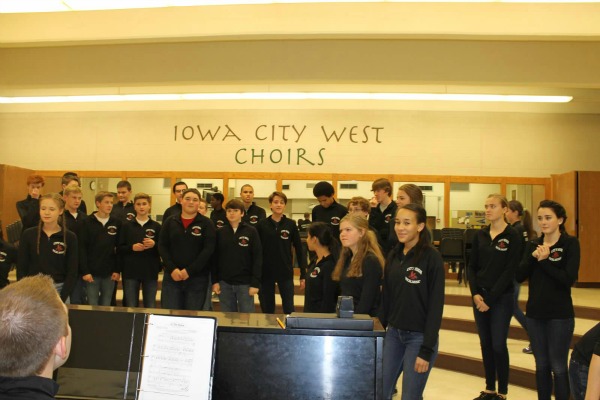 The hot lights shining on the faces of City High performers signal what they’ve been waiting for since June-the beginning of show choir season. Even though Works in Progress lacks any special lighting or costumes, it’s an extremely important performance for show choir members.

“It’s like our dry run before our winter show because we get a feel for performing in front of people,” Keaton Scandrett ‘18, said. A low-stakes chance to perform, Works in Progress serves as a jumping off point.

“When they announced City Lights I was trying to remember my notes and the lyrics of the songs,” Elias Perez ‘19 said, laughing at himself. “But once I got into the groove of dancing, I wasn’t nervous.” The group performed 3 of their 5 songs at Works in Progress and Showtime, West’s prep group performed 4 of their 5 songs. Scandrett believes there is underlying tension between the schools.

“Even though everyone was very kind, you feel a tension,” Scandrett said. “There’s always some pressure to be better.” Although Scandrett doesn’t like the rivalry, she isn’t worried about how the groups compared at Works in Progress. “West usually is a lot more polished in this part of the season but later in the season we tend to peak and then stuff evens out,” Scandrett said.

On the other hand, Perez loves the competitive side to Works in Progress.

“We showed West that they have competition this year,” Perez said.

Although Berry recognizes that the programs are compared, he doesn’t feel pressured.

“It’s really fun to share the stage with them,” said Berry. “We feel like we need to be better than West High and that’s very healthy but it’s more important to be nice.” Berry believes that both programs are strong and although they’re compared, the schools support each other at Works in Progress. “Everything is compared. That’s just the nature of the beast,” said Berry. “It’s not going to define our program whether we’re great or just good at Works in Progress.”

Shaw agrees. “For all the Works in Progresses I’ve been in, I’ve never really felt like I had to compete with West because that’s not what show choir is,” Shaw said.

4th Ave had an amazing performance and Berry isn’t surprised.

“Everybody did what they were supposed to do and succeeded and realized that with hard work comes reward,” said Berry. Berry exudes confidence in 4th Ave’s potential. “I knew they were ready to go and there was nothing to be nervous about because they were prepared.” 4th Ave’s hard work and dedication this year is paying off. Usually at Works in Progress, 4th Ave performs 4 out of their 5 songs. This year however, 4th Ave performed their full show for Works in Progress for the first time. “They know they have a fantastic show,” said Berry. “They knocked it out of the park and they’re gonna get even better.” Scandrett agrees. In fact, her favorite part of the night was watching 4th Ave perform. Scandrett’s favorite part about 4th Ave’s show is their infectious energy.

“They just make you want to get up and start dancing,” Scandrett said.

Another contributing factor to 4th Ave’s stellar show this year is that Berry isn’t directing both show choirs. Giving 4th Ave his full attention, Berry feels that the group is more prepared than they were at Works in Progress last year.

4th Ave plans to continue working to clean and perfect their show. “There’s always room for improvement,” Berry said. In rehearsals following Works in Progress, 4th Ave will watch a video of their performance and dissect it to make their show even stronger.

What’s Berry’s secret to success? Above all, Berry preaches that his performers be in charge of their individual performances.

“You can’t just go through the motions and be successful. Everybody should be able to stand up and sing and dance the show if I ask them to,” said Berry. “If your individual performance is where it should be then my wife and I can make the ensemble into something spectacular.”

Berry is confident that 4th Ave has the potential to win big if they keep putting in the work. “They know that we have a championship show and they better be ready to go,” Berry said.

No matter how good or bad the shows may be, over the years the bond between City Lights and 4th Ave has made City High’s program even stronger.

“When the varsity group is going out of their heads screaming for you it’s a really good feeling because they’re amazing,” Scandrett said.

Shaw agrees that the mutual support is beneficial.

“I love performing in front of audiences, especially with City Lights,” Shaw said. “The cheers fuel me and make me do better.”

“I absolutely loved to see City Lights bloom and become confident because 4th Ave was supporting them,” Berry said. “It was neat to see that comradery.”

With competitions quickly approaching, Berry wants City High performers to keep in mind what’s really important. “It’s not about who wins or loses. It’s about supporting music and having a blast.”