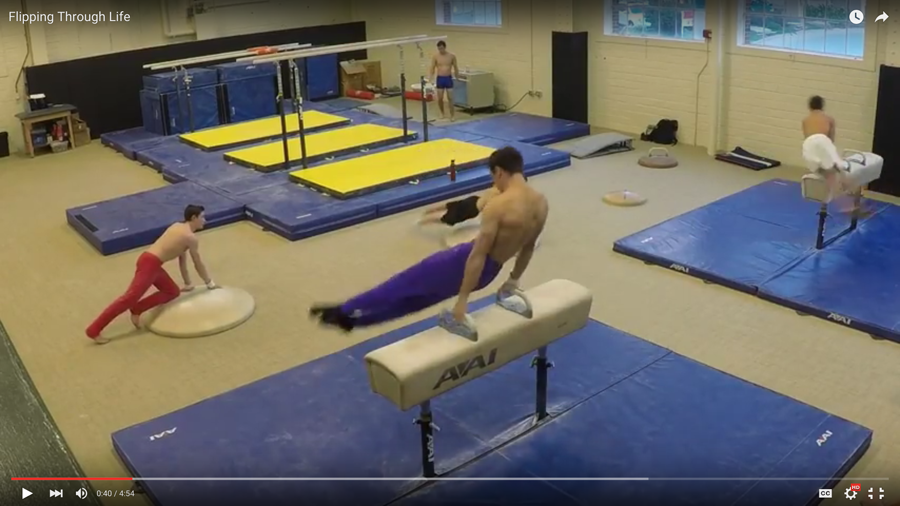 Following the downtown field house to the back of the building, the Eyas gymnastics club can be found. A gymnastics club where two brothers, Sam ‘18 and Max Piper ‘18, have been practicing gymnastics for the past nine years. Sam, a pommel horse specialist, usually practices his flairs or spindles on the Pommel Horse, while Max, an all around competitor, practices double fronts on Vault among other things. Their hard work and determination has, in return, presented them many rewards and opportunities to compete in prestigious meets like State, Regionals, and Nationals.

Starting at the age of six, Sam has found lots of success in his gymnastics career after his mom enrolled him, and his brother, in the program to burn off excess energy that was usually demonstrated at home. Sam has placed first in pommel horse at regionals in level 7, his highest score last year was a 12.6 out of 13.8.

Despite loving the sport, Sam has occasional worries about competing, which can include anything from the sensation of flipping through the air, to anxiety about impressing the judges. Falling is what scares Sam the most—not only for the pain of landing, but also the impact it will have on his score.

“It’s not only physically demanding, but there’s also this insane fear factor, for example high bar, or pommel horse, it’s just crazy what we do,” Sam said.

Much like his twin, Max Piper has placed highly in his career, placing first in regionals twice in a row on vault, and achieving a score of 12.4 out of a starting score of 12.7. His highest score last year was a 13.6 out of 14.4 on floor. Unfortunately, his sport took second priority when Sam’s fear of landing became Max’s reality. While at a gymnastics camp in Ohio, Max severely broke his foot landing a new skill on his favorite event, vault.

“When I found out that I broke my foot, I was shocked. At the time I didn’t expect it to be as severe as it was,” Max said.

Max was in a wheelchair for three weeks with a long leg cast for two weeks and a short for six weeks. When Max finally got off his cast, he lost 40 pounds of leg muscle through atrophy. Max had to quickly get back in shape before the season began.

“I competed, of course. Watered down routines obviously, and a lot of pain meds, but I did it,” Max said

Max and Sam are competing at the Field House in February at the IBI meet. They both hope to get to Nationals and have a better season than any previous.

“After I was informed of my broken foot, I think one of the first questions I asked was ‘when can I get back in the gym?’” Max Piper said.