One to One: ICCSD Moves Closer To Chromebooks

On the tech trail to one to one, City High is taking its first steps in the 2016-2017 school year to make one computer per student a possibility. In considering the size of this major district initiative, the ICCSD technology committee deemed Chromebooks the best choice, as they offer the accessibility of a computer at the cost closer to that of a tablet.

“Chromebook stood out as, by far, the logical choice because it’s the best of both worlds: it’s the closest thing to a laptop at a fraction of the cost,” City High Principal John Bacon said.

The project began about five years ago when then-assistant-principal Terry Coleman and Bacon teamed up to push One to One conversations into the district agenda.

With the expertise of assistant superintendent Matt Degner, who has led One to One initiatives in other school districts, and a “good deal” on Chromebooks, the ICCSD has been able to move forward in its goal to outfit each student in the district with a computer.

Mr. Bacon would like to make it clear that the Chromebooks plan has not yet been finalized.

“I want to be clear that this is not 100% yet, Bacon said. “But this is what we’re striving to do, and I’m confident this is going to happen.”

The current district plan is to purchase 300 Chromebooks each for both City High and West High schools, and 150 for each of the junior high schools. This breaks up into 10 carts of 30 for each high school. However, Bacon recognizes that in order to accommodate large class sizes, computer carts will have to be strategically reconfigured. Also in terms of the Chromebook’s usage, City and West are working closely to keep their uses aligned.

“The administrators at both schools felt like it would be nice to do this together so that we don’t become really different in terms of how we’re using [the Chromebooks],” Bacon said.

The two schools decided it would be best that Chromebooks be first introduced to the English department, with one cart in each classroom.

“I think it’s a great step, because that way an entire department really starts to get familiar with how to incorporate this device into their instruction, use it to enrich what they’re able to do, and use it as a tool to enhance instruction,” Bacon said.

Bridget Brown ‘18 is already using Chromebooks in her English and science classes classes, where she utilizes the computers for video projects, bibliographies, narratives, and Google Classroom.

“At first it was harder [to use computers] because I’m not completely computer-savvy, but I’ve gotten used to it, and it’s actually a lot easier because you can upload assignments from anywhere,” Brown said.

Emily Bywater ‘17, who also had the opportunity to work with Chromebooks in Ali Borger-Germann’s English class last year, believes transitioning to One to One would be a tool she would utilize.

“[Having Chromebooks] was really nice,” she said. “We worked on our writing pieces and we did other class activities with them.”

The ICCSD decided it best to assign Chromebooks to entire sections at one time after debating a system where teachers would submit an application to state their specific uses for the Chromebooks. The advantages to this system, according to Bacon, would be that Chromebooks would go to innovative, interested teachers. However, the district ultimately decided that keeping consistency with use within a school and between schools is most important.

“What I fear is if you have one section of World History with the Chromebooks, our two sections within our school of that class would look very different,” Bacon said. “Depending on which teacher you have, your experience in that class could be very different.” 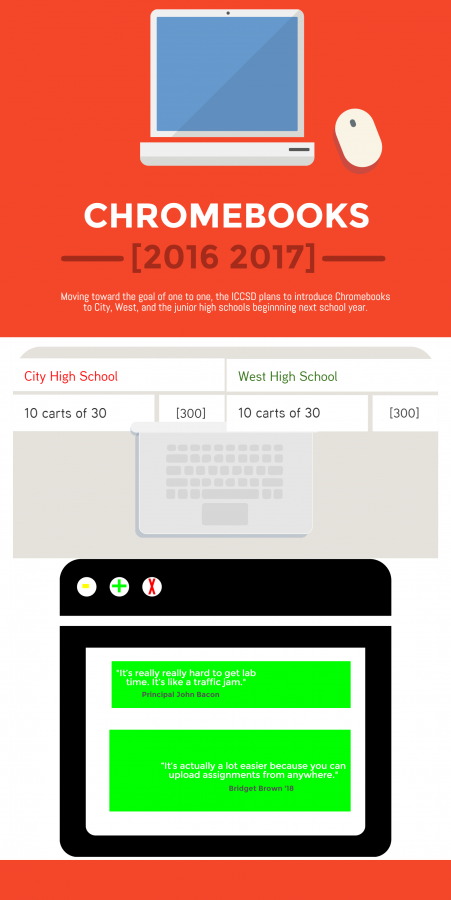 Brown appreciates the accessibility of the Chromebook cart in her classes.

“If we have them full time, we can use them for everything without having to compete for them with other teachers,” she said.

Bacon sees first-hand the strain lack of computers has on teachers’ lesson plans.

“As I walk in the door at City High, a common complaint I get from teachers is that our computer labs are constantly tied up,” he said. “It’s really really hard to get lab time. It’s like a traffic jam; teachers rush to sign up to get lab time. A lot of it, at times, can be Language Arts teachers using it for paper-writing and such that doesn’t require a full, powerful computer lab, but they still need the computers.”

Bacon sees Chromebooks at City as a way to provide full time access to computers while allowing classes who need functionality of a powerful computer more availability.

“It’s like a double-positive: not only do we get Language Arts teachers to be given these carts, but it’s going to free up our labs for everybody else,” he said.