The Little Hawk • May 3, 2016 • https://www.thelittlehawk.com/29936/sports/little-hawks-defeat-prairie-in-penalty-shootout/

The Little Hawk boys soccer team improved to 11-0 on the season after defeating Cedar Rapids Prairie 6-5 in a penalty shootout. 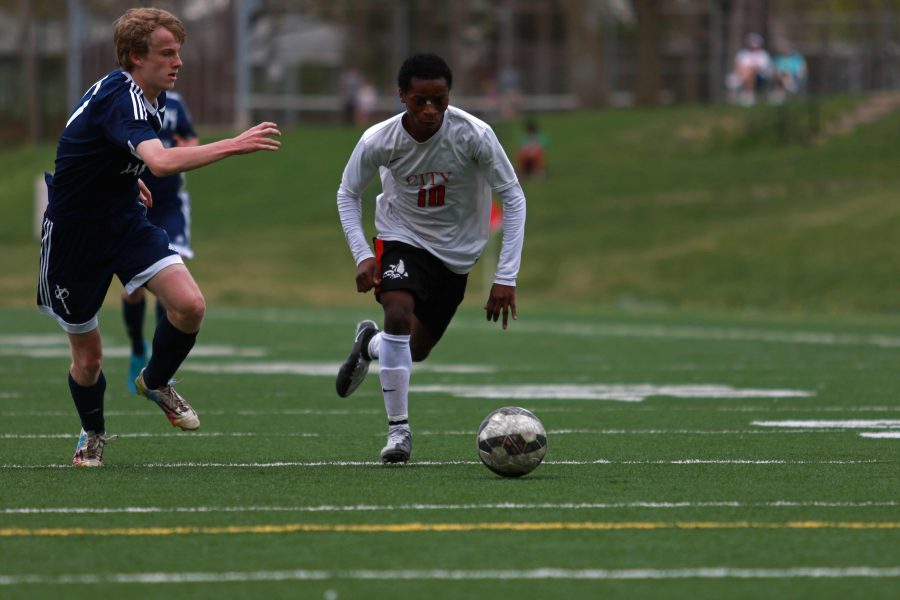 Gaby Baloci '16 dribbles towards the box past a Xavier defender on Monday, April 18th, 2016.

After 100 scoreless minutes, the Little Hawks finally defeated Cedar Rapids Prairie 6-5 in a penalty shootout after Prairie missed on its sixth penalty of the shootout.

“It was pretty nerve wracking, I mean every penalty there counts, and I was happy to be able to step up and put the sixth one away. It was really unfortunate that we had to go to penalties, but it’s better a win than a loss,” Rasmus Schlutter ’17 said after he scored on the sixth penalty for the Little Hawks that ultimately was the deciding factor.

After 80 scoreless minutes, the game went into overtime, where the Little Hawks were able to possess the ball for a majority of the time. Gaby Baloci ’16 had multiple shots on goal in the second half of overtime but was unable to capitalize. The game then went to penalties, where captain Victor Brown-Rodriguez ’16 scored on the first penalty. The Little Hawks kept making their penalties, but so did the Hawks did as well. Both teams made their first five penalties easily. After Schlutter’s shot, Prairie needed to make one more penalty to keep the game going. The Hawks’ shot went off the top of the crossbar, missing to give the Little Hawks the win. With the win, the Little Hawks improve to 11-0 on the season. Head Coach Jose Fajardo believes that his team didn’t play its best, but believes that the Little Hawks’ ability to finish close games will be big as the season continues and he remains optimistic about the future.

“At the end of the day, if you can get the win, that’s all that matters. I think that sometimes the difference between champion teams and teams who don’t make it is winning the games even when you don’t play your best,” Fajardo said. “We just need to manage the games, and once we get there, I think that we will be okay.”

Only five games remain in the regular season for the Little Hawks, with the next being at 5-4-1 Dubuque Wahlert on Friday, May 6.