The Little Hawks defeated the Ames High Little Cyclones (1-0) in a state semifinal matchup in Des Moines at the Cownie Soccer Park. 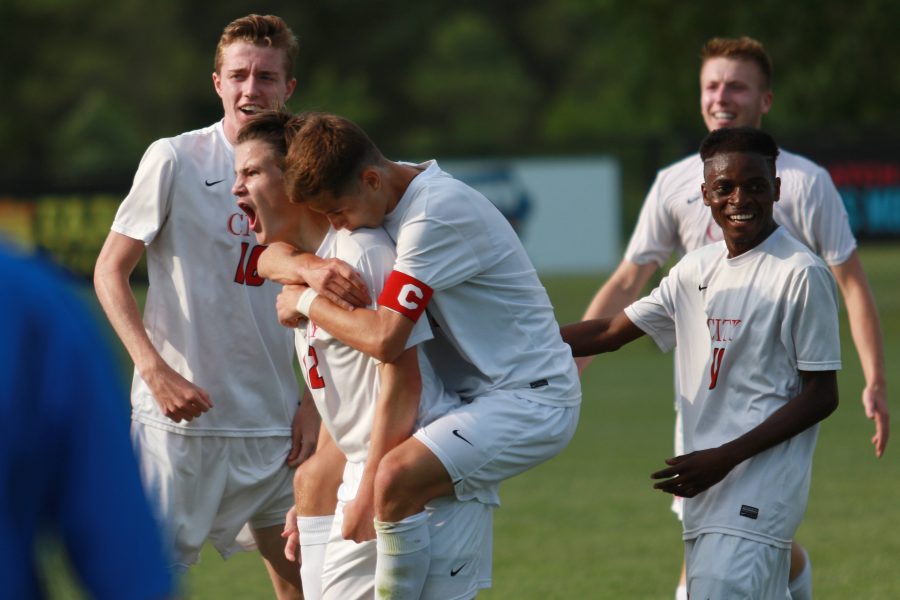 Mitch McCarthy '16 (C) leaps onto the back of Jackson Meyer '18 (12) in celebration after Meyer's goal against the Little Cyclones during City High's semifinal game in Des Moines at the Cownie Soccer Park on Friday, June 3, 2016.

For over 70 minutes, City High and Ames were locked in a scoreless draw. Jackson Meyer ’18 scored what proved to be the deciding goal off of a cross with just over seven minutes to play, sending the bench and team into a frenzy.

“It’s just unbelievable. We’re going to the state final. Unbelievable, that’s all I have to say,” Meyer said of scoring the game winner.

For the first 70 minutes, both teams had opportunities that they were not able to put away. The Little Cyclones’ best chance to get on the scoreboard came just minutes into the second half when a shot hit the post, bounced around in the box, and was eventually cleared away by Sarrive Rukakiza ’16. City High started to get more chances later into the second half. In the 67th minute, Gaby Baloci ’16 fired off a shot that was blocked on a diving save by the Ames keeper. Shortly afterwards, City High coach Jose Fajardo decided to move the left-footed Meyer up to attack instead of keeping him at left-back as Fajardo realized that it would be an easy shot inside for a left-footed player.

City High was able to hold off Ames for the final seven plus minutes to secure the 1-0 win. The Little Hawks will play second-seeded West Des Moines Valley in the final on Saturday, June 4 after the Tigers knocked off Cedar Rapids Washington in the other semi-final matchup.

“I don’t care [who we play in the final], I’ll deal with that game tomorrow, I want to enjoy this one first,” Fajardo said.