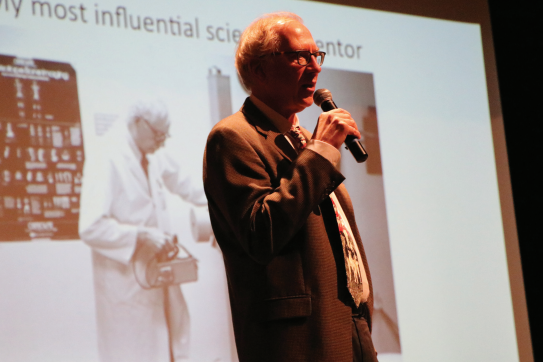 From a young age, Thomas Cech had a deep passion for geology, investigating rocks and minerals. As he went through high school, he still pursued this interest, frequently chatting with geology professors at the University of Iowa. Despite his childhood interest in science, Cech developed interests in varying subjects in college, discovering a passion for literature much like his passion for physical chemistry.

As he began research he quickly found out that traditional chemistry was not the subject he wanted to explore for the rest of his life. Cech was searching for a different lab to work in and he eventually met John Hearst, a chemistry professor at the University of California, Berkeley, studying chromosomes.

Cech continued researching chromosomes and later set off to the University of Colorado Boulder, where he began his Nobel Prize winning research on RNA and its functions as an enzyme. Today, Cech continues his research, investigating certain part of the structures of our DNA and RNA.

Now, Cech and his lab at the University of Colorado at Boulder are researching telomeres. Telomeres are located on the ends of chromosomes, and carry important hereditary information. Over time, the telomeres get shorter and shorter, ultimately leading to mutations. These changes in chromosome size have been linked to several age-related diseases, such as Duchenne muscular dystrophy. Additionally, tumors can grow due to the reactivation of telomerase, an enzyme that can add nucleotides and eventually lead to urothelial cancer – a common cancer that affects the urinary system.

“Tumors have to stumble on some way to reactivate this process [of cell division] so they grow continuously. Those cells that don’t find some mechanism to reactivate telomerase aren’t able to continue growing,” explains Cech. “That process is one that we would like to inhibit, and it would be broadly applicable to all human beings.”

Kevin Koepnick, City High Biology and AP Biology teacher, is very interested in this area of Cech’s research, and acknowledges its importance.

“We may have approached what we can do therapeutically to make quality of life last longer,” Koepnick said. “We’ve improved nutrition, we’ve improved vaccination. We’ve eliminated infectious disease to a large extent. Now we’re working on people’s heart healthiness [and] gotten rid of poisons in the air. We’re doing pretty good there – what’s the next step? Well, [Cech’s research] is the next step!”

Ever since he started working with rocks in elementary school, Cech’s drive of curiosity has not changed. He strives to always be inquisitive, and Koepnick agrees.

“Just because we understand something to be true and correct, it doesn’t mean that it is,” Koepnick said. “It means that in science, it’s our best understanding.”

Cech believes that the reason for his unquenchable thirst for new discoveries is his engrossment in this area of research.

“I think [genetic engineering] is exciting, and I think it continues to be exciting,” said Cech.