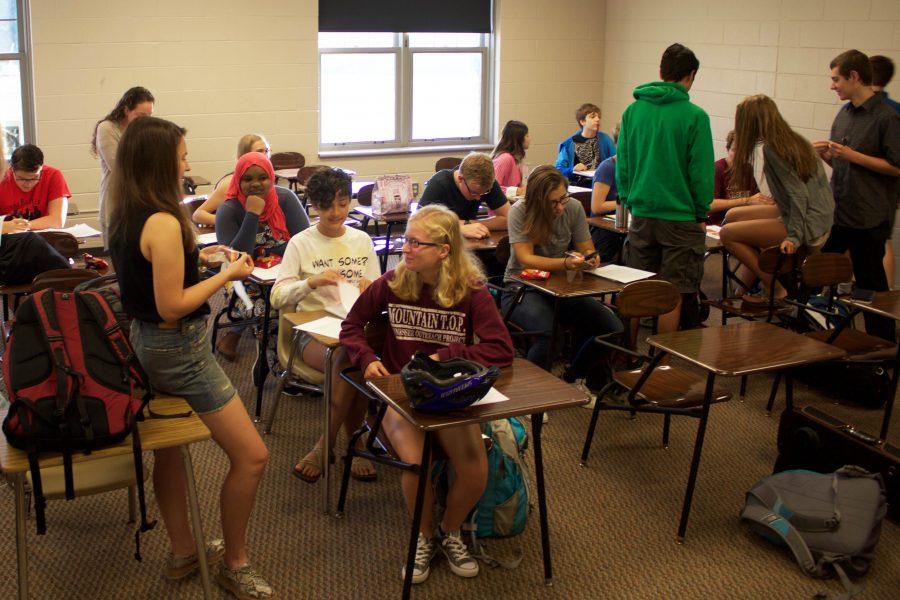 Students collaborate in the classroom.

Math Club is kicking off their season with a huge increase in membership.

“I thought it was a lot of fun, there was a ton of food and food is always a plus,” said Meirav Flatte ‘19. “It was kind of chill and relaxing, I just got to kind of hang out with my friends and do math because what’s more fun than that?”

Flatte is new to the club this year, but some of the other current sophomores joined last year.

“I’m really excited about how many new people we have this year,” said Younes Rouabi ‘19, who joined the club as a freshman. “A lot more freshman are doing it this year, like last year it was just me and Nhat and that was pretty much it, but now it’s going to be really fun because everyone is doing it.”

Grace Parrot is a freshman this year and came to her first meeting last Thursday.

“I like it because you don’t have to be really really good at math to join because there are people there to help you. You just figure it out with your friends and work it out with them,” Parrot ‘20 said.

Competitions take place every few months within the Great Plains Math League, one of several in the nation. This league is Midwest specific, and has evolved quite a bit since it was first founded. Mrs. McLaughlin, Algebra II Honors teacher, is the club’s sponsor.

“The contests that we do are a little more structured and organized now,” Mrs. McLaughlin said.  West High did the first math club, and Mike Morkety was the guy in charge then. He’s in charge of Des Moines Central’s math club now, but he really likes math contest stuff, so he had his students work on problems and come up with problems. Then they had these contests that they hosted and they invited schools to go over there.”

Today, students are given different sets of problems. Depending on the round, the problems are solved individually or with a team. The math itself is more logic and problem solving based than higher level calculus, allowing a greater number of students to participate. Throughout the year, the team will work their way up to the state competition that takes place in April.

“It’s a great way to meet new people and think about math things that you might never have thought of before,” said Rouabi ‘19.