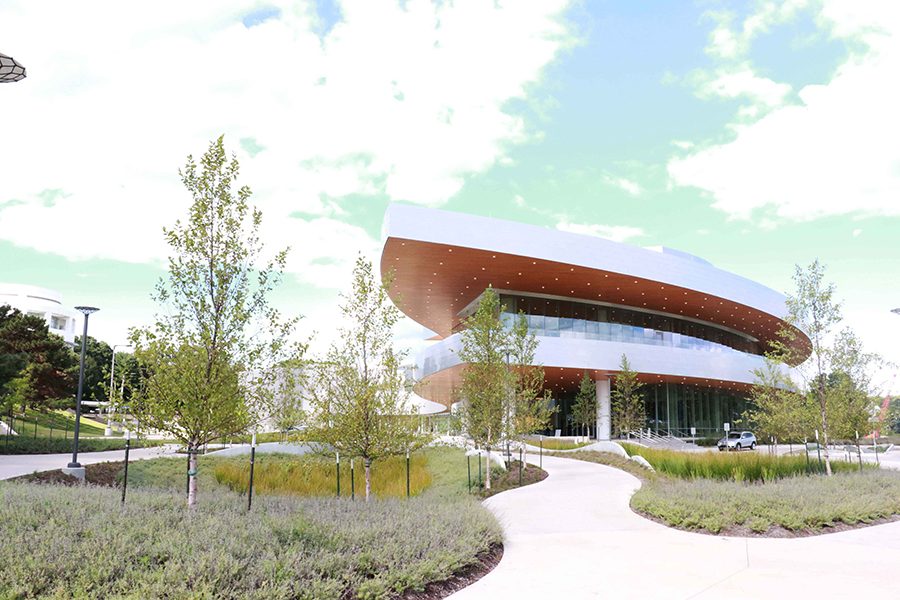 Rob Cline, the Director of Marketing and Communication at Hancher Auditorium, strolls along the terrace of his new completed workplace and points out to a flattened field adjacent to Iowa River.

“We’re looking out over what we call the ‘Hancher Green,’” Cline said.

After the Iowa River flooded in 2008, Hancher and the surrounding areas were devastated.  The building that had once held the graduations of both City and West High students and hosted performers from across the world was rendered unusable, partially submerged under the waters of a 500 year flood. Now, after 8 years of demolition and reconstruction, the newly opened auditorium is a completely redesigned space, but one still tied to the history of the organization.

“I personally love that what you’re looking is the old site [of Hancher]. There’s a little bit of a connection there,” Cline explained.

For Cline, who has worked at Hancher since November of 2001, that connection to the auditorium’s past was an important one, agreed upon by both the architect and the staff.

“That tree is our memorial tree for the three workers who were killed in the construction of the original building. We were very clear that we would be saving that tree,” Cline said. “I know in my mind exactly where that tree in relation to where that the old building was.”

The old Hancher was one of the central parts of the University’s performing arts scene for over 40 years. The original building was designed by architect Max Abramovitz, a well known architect of the time, and remained a major venue until the flood. For the design of the new building, the Hancher staff wanted to maintain the recognizability of the former building and the focus it had on the University of Iowa campus surrounding it. Architecture firm Pelli Clarke Pelli was selected to head the new Hancher project, and worked to develop a new harmony between Hancher and its once destroyer: the river.

“Despite what it did to us, we love the river and the way this building responds to the river,” Cline said. “And those of us who are old timers love the connection to the old place. There are a lot of things to love about this building.”

Just as the building maintains connections with its past, effort has been put into restoring Hancher’s connection with the community. On September 11th, Hancher held an open house, drawing in students and admirers of the arts from all over Iowa. One of these students was senior Cassidy Slater-Scott, who attended the open house with Little Hawk reporter Danielle Tang ‘17.

“They had living representations of the building,” Slater-Scott said, “[Hancher] had all these people coming in on stilts and people dressed in other outfits from a working company.”

The open house introduced Hancher to the general public with food, drink, and information about the upcoming season.

“It’s beautiful. It’s so nice and really light inside,” Slater-Scott said. “They have a cafe, and at every level they have a bar where you can order all kinds of drinks.” 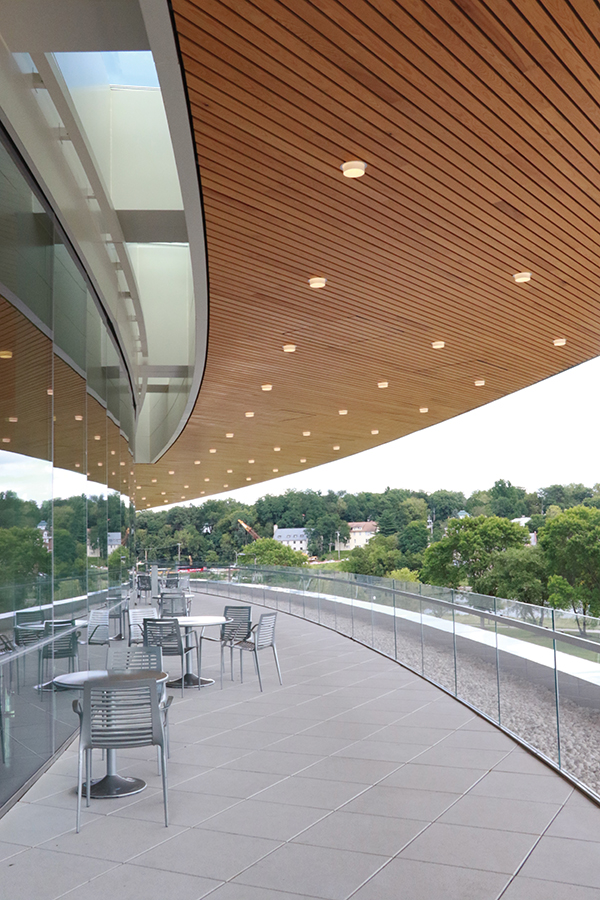 “I think there’s something special about the shared experience of seeing art as students and being able to take that into your classroom and discuss it,” James said.

This learning exposure is better exemplified by The Migration, the newest show from Step Afrika!, a personal favorite for James. The show follows the movement of African-Americans from the southern United States up to the northern states and will show at Hancher on October 20th.

High profile performers are staying loyal to Hancher, even after the 600 seat reduction from the old building. Now holding 1,800 audience members, Hancher has downsized to increase the quality of their acoustics, a trade-off that is becoming more and more popular in modern auditoriums. The downsizing has not dissuaded the broadway shows from performing in Hancher, as Book Of Mormon is showing from October 11 through October 16th.

The decrease in seats, however, hinders rumors of City High’s senior commencement taking place in Hancher. On the possible location change, Cline joked, “We would love to have those commencements back. Would all the grandmothers and grandfathers of the world be able to come? I don’t know.”

Another effort to appeal to students is the return of the $10 tickets. $10 tickets have been offered for years, but now Hancher has opened the opportunity up to K-12 students.

Cline predicts that the return of the $10 tickets will increase the accessibility of the arts for young people.

“What you should really be looking at in [Hancher’s] brochure are the people you’ve never heard of who you can pay $10 to come see”, Cline said, “Because they will blow your flippin’ mind, we promise!”

James and Cline hope Hancher’s campus will continue to grow in its inclusiveness with the University campus across the river. A big step in this process was ensuring the visibility of the capitol building, now apart of the view from Hancher’s south facing balcony. With greater visual connection to both the community and Hancher’s own history, the auditorium and its staff are hoping to usher in a new era of Iowa City performing arts.

“In the interim between the two buildings there [were] two generations of University of Iowa students who didn’t have access to a performing arts center where they are,” James said, “It will be something special for arts students to be able to have something like this in their own campus in their own community.”