A Look into Eight Player Football in the State of Iowa

At 1,720 students this year, City High is one of the largest high schools in the state of Iowa. The Little Hawks compete at the highest level in the Iowa High School Athletic Association in football, class 4A. However, at some very small schools, they play football with only eight players. On October 21st, I went to Lone Tree to watch Lone Tree play Midland in an eight player game. 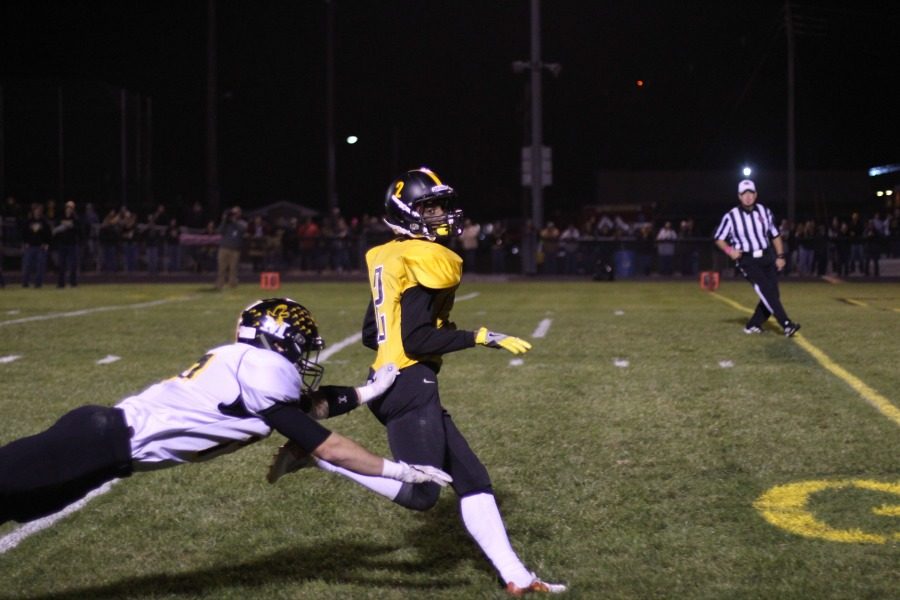 It’s a Friday night in Lone Tree, IA. Like in many towns and cities across the country during the fall, that means it’s Friday night lights. Except in Lone Tree, something is different. This season, for the first time there, there are only eight players on the field at one time, the field is only 80 yards long, and only 40 yards wide. However, at its core, this is still high school football. In 2016, this is how it is for 61 schools across the state of Iowa.

Eight player football in the state of Iowa is actually not that different from normal football with eleven players. The officials receive no special training before working eight player games. There still are five referees for varsity games. The field is smaller, but the rules are still almost exactly the same. The IHSAA still plays the championship game in the UNI-dome in Cedar Falls.  However, without it, many small schools would struggle to have enough players to field a team.

“Our players now can learn a position and get good at it. In years past (when we still played 11-player football), we may only have 15 guys who are ‘varsity’ ready and we may move kids around to three or four different positions when someone goes down with an injury. Now we can have a true two deep and guys aren’t learning multiple positions,” Shield said.

There are six divisions of high school football in Iowa. City High plays in class 4A, the class reserved for the largest 48 schools in the state. 3A, 2A, 1A, and A are the other classes with eleven players. The larger the number, the larger the schools. Then there’s eight player football, a class of its own. To be eligible to play eight player football, a school needs to have fewer than 115 students in grades 9-11. Schools of this size aren’t generally found in Eastern Iowa. Lone Tree is new to eight player football this year, and a few teams are up by Cedar Rapids, including Springville and Central City, but travel for teams in the eastern part of the state is generally greater, given that a majority of eight player teams are in the southwestern corner of the state.

As far as the strategy of the game, it is fairly similar, except with three fewer players on the field, it changes things defensively, as open field tackling becomes more important.

“I think athletic athletes definitely stand out more in the eight man game. In eleven man, I feel a team can really spy or double cover an excellent athlete,” Shield said. “In eight man, it’s a lot harder to double team someone as a defense is already short handed without force defenders. This creates a lot of one on one matchups in which the better athlete is going to come out on top the majority of the time.”

It also isn’t that different in the bonds and connection that teammates form, as well as the coaches. If anything, it’s stronger with smaller teams.

“I really enjoy the camaraderie of the guys grades nine through twelve all on the same team and doing the same things at practice,” Shield said. “Our freshman look up to and emulate the seniors and our seniors do a great job of setting the example and expectation of the underclassmen.”

Throughout eight player football, there are different styles of play. Lone Tree is an option offense and has been since 2010. Midland, a school with an eight player team, is located in Wyoming, IA, about an hour northeast of Iowa City. With a smaller team, Midland coach Casey Hack says that it’s important to set his offense to his players’ strengths. This year, Midland ran a gun spread offense, which Hack says is similar to many college schemes. He says having talent at the quarterback and wide receiver positions allowed his team to run that this year, but says next year, he plans to go to more of a running offense.

“I have players that can handle very complex plays. We like to play to our strengths,” Hack said. “Next year we are hoping to be towards the top of the state in rushing.  My philosophy is all about using the kids I have and using their strengths.”

“It wasn’t that much of a change for me as a running back. We have the same plays and are able to do the same things as we did in eleven man,” Squiers said. “It doesn’t exactly affect how I play or practice.”

Another big difference in the game is the speed at which it is played. The shorter field allows for more explosive plays and higher scoring games. This year, Midland scored 55.8 points per game.

“One of the main differences that I see is the scoring differential is much different.  In 11 man if you are 2 TDs better than a team that is likely a 4 TD differential in 8 player,” Hack said. “Leads are not safe because of the big play potential.”

Landon Hunter ‘17, a Midland fullback and outside linebacker believes that the fast pace of the game changes how the game is played, especially late in games.

“My favorite part of 8-man football is the fast pace and high scoring games. No one is ever out of the game until the clock says zero because quick scores are not uncommon,” Hunter said.