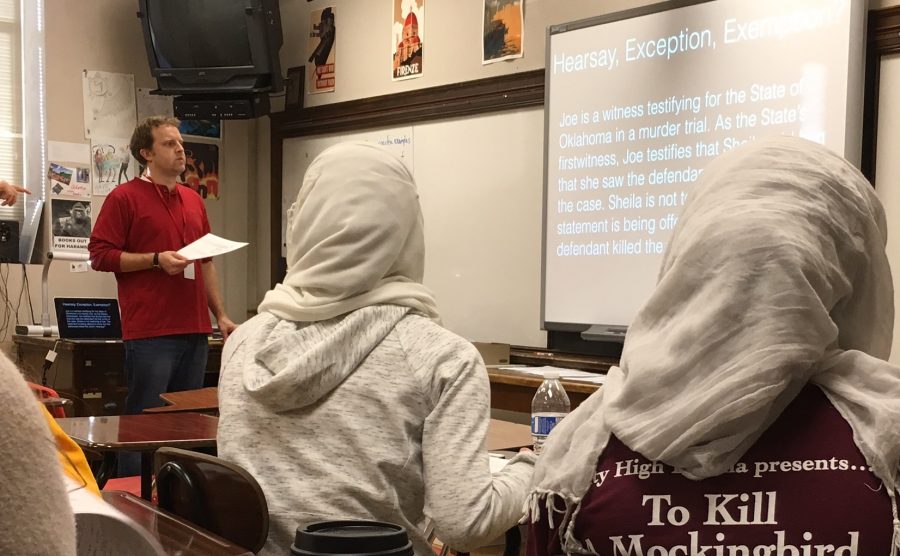 After successfully qualifying for their first state competition last year, the mock trial team is trying something new.

“We’re starting to practice earlier to identify particular areas we can work on without having the specific problem [ahead of time] this year,” Jason Schumann, one of the mock trial advisors, said. “For example, we’re working on objections so that the students can familiarize themselves with the rules of evidence.”

The team traditionally begins to meet following the release of the official case in December. This year, however, their practices began in August. Instead of waiting for a specific case, they have decided to work on a practice one.

Jessica Sheffield ‘18, one of the club’s two co-presidents, is happy about the new changes.

Even after only one year of membership, mock trial already has a special place in Sheffield’s heart.

“We all just became really close, and I learned so much. It was amazing,” Sheffield said.

Although the team only had one freshman member last year, that number has swelled this year to include several new freshmen and sophomores alike. With these younger members come both new challenges and new opportunities.

“We have a really solid nucleus of returning veterans, and I think we’re going to be able to complement that with some newbies,” Schumann said. “Hopefully we’ll be able to get them up to speed very quickly since we have such a strong core of veterans who’ll be able to serve as leaders for our team.”

Sheffield thinks that these changes could make the difference.

“There’s so much more diversity in terms of grades and the experience that people have,” Sheffield said. “I think we have a really good chance to do well, and I think in a couple years that the people in my grade will leave a sort of legacy, because we’re the ones who really got into it and made it something special.”