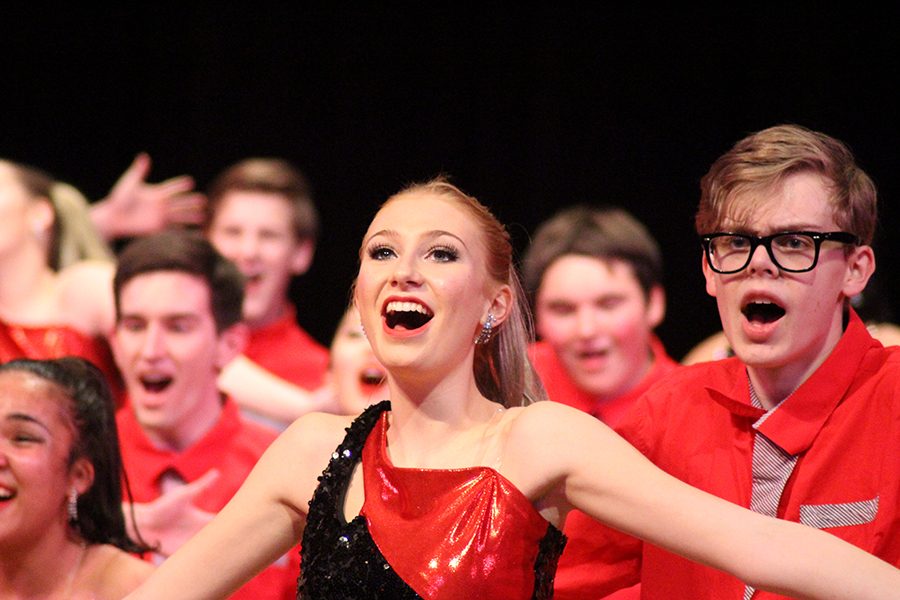 This show choir season, City High’s Fourth Avenue Jazz Company was off to a disappointing start, but now both City Lights and Fourth Avenue are rising from the ashes of their burning 6th place trophies. After a few dispiriting placements, the show choirs are making a comeback, and with one competition left to prove themselves, they have their fighting hats on.

“There’s been a very somber reaction, I think everyone was expecting to do better, especially with how hard we work,” said Amadou Sanogo ‘18. “You can see the looks of disappointment on people’s faces after competitions.”

This past weekend at Anamosa Sadie Street Showcase, City Lights ended the day in first place and Fourth Ave in third during the daytime awards. After weeks of reflection, Fourth Ave is trying to zone in on what exactly will help them improve, and how to bounce back from this year’s drastic change in chemistry that resulted from director and stylistic changes.

“I think people are still recovering from Berry leaving because it really was heart- breaking and ever since then it just hasn’t been the same,” said Jessie Shaw ‘17. “I also think that since last year was such a let down, people in Fourth Ave are still kind of insecure about our show, which really is a great show, but people just can’t seem to forget about last year. Myself included.”

Dealing with tough placements can be very discouraging for show choirs, considering the amount of hard work and passion that is put into a performance. City High is learning to accept the challenges with grace, but suspected bias from judges is always a component in show choir gossip. Placements are decided from the average rating of all the judges, so if one judge rates the show choir extremely low, the entire placement is thrown off.

Earlier in the season, Fourth Ave felt confident that they had knocked it out of the park at Waukee Starstruck Show Choir Invitational. However, when the team didn’t make finals, tempers flared and many performers became discouraged and upset. After learning about how fickle some of the judges were, however, their feelings shifted from somber to determined.

Classmate feedback is an important element of participating in a high school show choir, and peer responses can be both helpful and hurtful. Students are not hesitant to share their critical opinions with the members. It is common for performers to feel insecure about their show, which can affect their performance on stage.

“We haven’t been receiving any real support from our classmates who constantly tell us how we aren’t what we used to be,” said Sanogo. “I think that really affects us.”

Fourth Ave is determined to make improvement and is far from giving up. They know to focus on their positives. While not easy to maintain, a good attitude is essential for a successful show choir.

“There’s things that have gone so well this year: like more of a focus on singing, and our rehearsals go really well, too. If you’re talking solely about our placements, we’re pretty disappointed,” said Emma Arp ‘17.

“It’s hard to have a show that you dedicate so much time to not place well, but I think that these next two competitions will go really well for us.”

City High’s success in Anamosa encouraged and lifted everyone’s spirits for the next competition on February 11th at Washington High School in Cedar Rapids, followed by the Spring Show the following weekend. Performers are keeping their heads up and looking toward the end of the season.

“All of Fourth Ave is upset with the results, but I think it motivates us more. The warm up room definitely gets a little crazier now,” said Arp. “Placements are important, but I couldn’t ask for better people to perform next to. Competitions are always fun, no matter what.”