For two City High students, the winter is their wonderland. 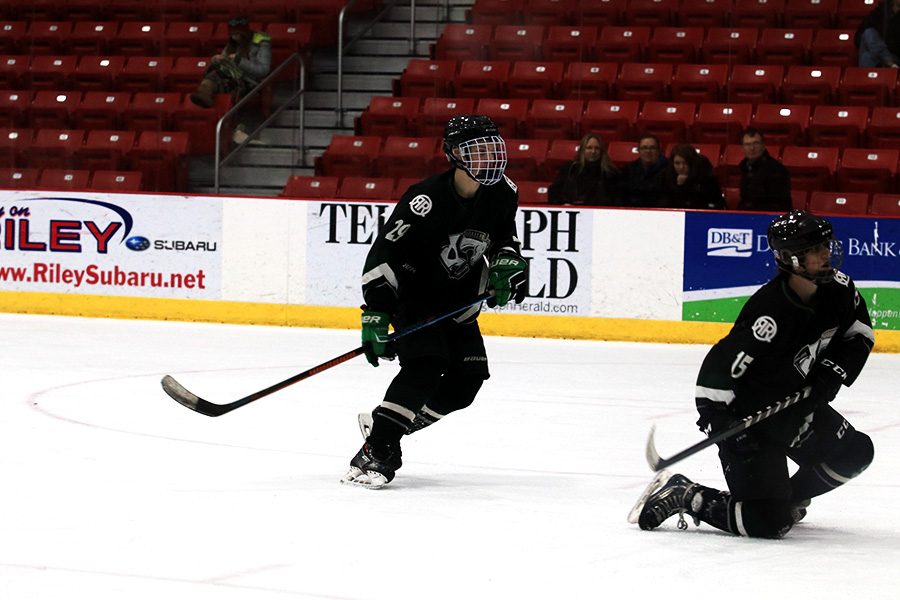 Matthew Taylor '20 skates down the ice during a game in Dubuque on Saturday, February 4th.

For many City High students, the snow and ice is a nuisance, but despite the dropping temperatures and seasonal depression, winter provides a lot of opportunities for seasonal fun.  However, for some it’s more than just that. It’s a way of life. Their sports would not exist without it.

For Matthew Taylor, a freshman here at City High, the competition field is something completely different–the Cedar Rapids Ice Arena. Taylor has been playing hockey since he was about five years old.

“I saw this ‘try hockey for free’ sign at the ice rink I skated at and I guess that just sparked something,” Taylor said on how he got into the sport.

Now, having played for almost 10 years, he is a very dedicated player. He practices in Cedar Rapids, Iowa at the ice arena used by the Cedar Rapids Rough Riders, which is about a half an hour drive from his home. He attends practice three times a week and has lifting twice a week on top of that. On the weekends, he and his team have two games per week. Unlike most City High athletes, who travel throughout Eastern Iowa, usually no further than Dubuque, Taylor often has to travel throughout the Midwest for games. He has traveled to places such as Lincoln, NE, the Quad Cities, as well as Kansas City just to play hockey games.

Taylor says that even though he can’t do it in school, it’s the people that make it worth his while.

“I love getting to meet new people that you probably wouldn’t meet otherwise,” Taylor said.

“It’s different people that you would never meet otherwise and you share a lot of things in common with these people. It’s a great group of people.”

Even though he loves that hockey is not through school, and the opportunities that come with that separation, he believes that certain aspects of it would be easier if it were done through school.  “It would make transportation a lot easier and school work would be easier to deal with,” Taylor said.

When the season ends in March, Matthew still works on improving his game and still has practice once a week.

“We have scrimmages that we go to that are organized and sometimes i’ll go to the rink and just skate with my friends,” Taylor said.

Above all, he hopes that hockey takes him far in life. Taylor wants to continue playing hockey throughout his life whether collegiately or at a frozen pond by his house.

Like Taylor, Max Long ‘19 also lives for the winter that many other students seem to dread. “I love that when it’s dark out, the sky glows because of the snow. It’s so cool,” Long ’19 said.

Since Long was four, he and his father have been snowboarding together. His father taught him to snowboard, starting with the basics of balance and turning. Long remembers the very first day learning to snowboard at his grandparents house with a plastic snowboard.

“The hill was barely big enough to sled on,” he recalled. Every time he would fall, he would get up and look at his dad, who was smiling, full of pride. The two of them usually snowboard at Snowstar in Andalusia, Illinois, a small ski resort started by 3 ski-passionate families. Long usually goes every other weekend. Since the resort is so small, he knows everyone who visits frequently.

“It’s a mom and pop style place started and it’s small enough that I know anyone who visits frequently, and everyone has a great time and the atmosphere is just a really happy vibe.”

Even with the ski resorts in the Eastern Iowa area, snowboarding can be very hard to do. The season is short and very unreliable.

“The whole hill could be snow one weekend, and the next weekend be mud and grass.” Long said of the Iowa slopes.

To avoid the unreliability of Iowa’s slopes, Long takes whatever chance he gets to snowboard in Colorado, his favorite place to spend his winters. He often ventures with his family to Copper Mountain, Colorado, to snowboard on slopes not accessible in the Midwest.

Although Long can’t snowboard at school, he still wishes that City had ski trips like South East Junior High had in the past.

For most athletes, the team aspect of sports is a major draw. Long is different in that he loves the fact that he doesn’t need anyone else to enjoy the sport.

“I just love the solitude of it all. I don’t need anyone there to tell me what to do,” Long said.

Long wants to continue snowboarding in the future at least as a hobby, but would love to pursue it as a profession, even though he doesn’t see it as a realistic goal in Iowa.