City High students organized a fundraiser for the Thirst Project, an organization dedicated to ending the global water crisis. 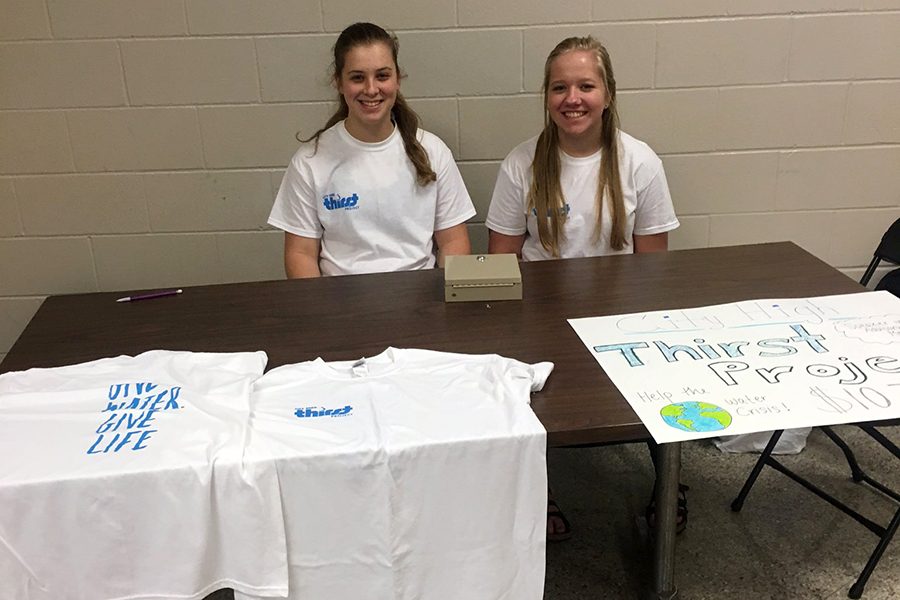 1 in 10 people lack access to safe water, which means that twice the population of the United States lives without access to safe water worldwide. According to the World Economic Forum, the water crisis is the #1 global risk based on impact to society. Five City High students have decided to do something to change these statistics.

“[Living without water] is something we can’t even imagine,” April Wilson ‘19 said.  “I believe this should be something we think about every time we take a drink.”

April Wilson ‘19, Alexa Fredericks ‘19, Maggie Cremers ‘19, Kaylee Paulsen ‘19, Adriana McCall ‘19 and Avery Wilson ‘20 will be selling t-shirts to benefit the Thirst Project. The Thirst Project aims to build a “socially-conscious generation of young people who end the global water crisis” by educating students about it and activating them to get involved with the clean water cause and build real water projects all over the world.

“I had to give a speech in English with Mrs. Peters about a non-profit organization and I chose the Thirst Project,” Wilson ‘19 said. “After reading through their website, I decided that this was an issue I wanted to help with, so I got some friends involved and it just took off from there.”

Wilson looked into other organizations while researching for her speech but ultimately decided on the Thirst Project.

“I really liked the Thirst Project [versus other water crisis organizations] because they are very focused on getting the youth involved and educating students like us about the water crisis.”

Wilson and her friends will be selling t-shirts for 10 dollars that read “Give Water Give Life” during lunch everyday until Spring Break.

“ I’m hoping we can sell more shirts at other events if we can get them set up, but it would be nice to get a sponsor to print the shirts so we don’t have to print them all by hand.”

As for future plans, these students have set up a speaker from the Thirst Project to speak about the global water crisis, and what is being done to alleviate it during Advisory on March 3rd. The girls also hope to turn their efforts into a club at City High.

“I’m hoping to get a really large crowd to listen to the speaker in two weeks. Passes [to hear the speaker] are available in the office. Also, listen for future announcements about a Thirst Project Club or events. We have ideas for proceeds nights at local restaurants, a walk/run at Terry Trueblood this spring, and hopefully more t-shirt sales.”

The girls made 120 shirts and are hoping to sell all of them before Spring Break.

“We could give hundreds of people water for life if everyone bought a shirt.”