Welcome in the spring with these traditional and deliciously simple Venezuelan recipes. 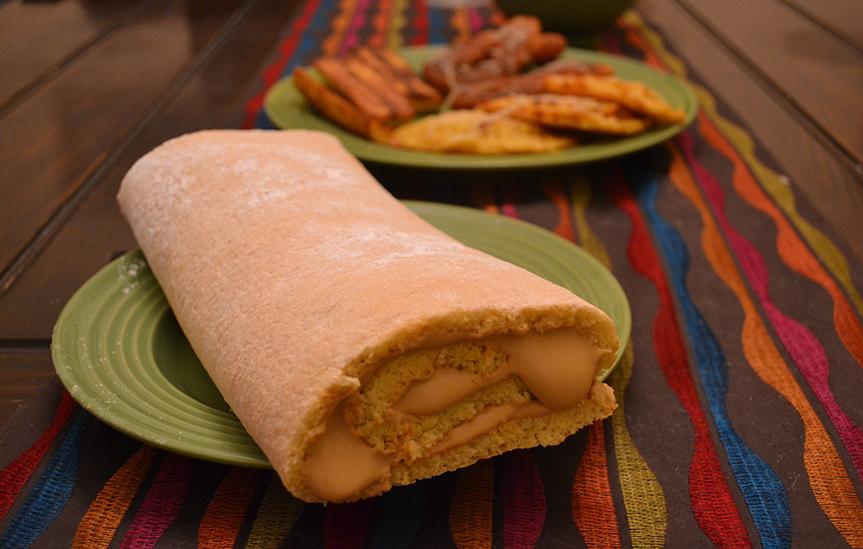 Directions: Take eight ounces of queso fresco and break them into small pieces. Peel a large plantain, and then boil it ten minutes until it is soft. After the plantain has boiled, place it, the queso fresco, 1 ½ cups of cornmeal, ½ cup of brown sugar, and ½ cup of hot water into a food processor and blend them until they form a consistent mixture. Knead the mixture into a dough. Put oil into a large pan and heat it so that you can begin to fry the mandocas. As the oil is heating, take the dough and roll it into tubes. Fold the tubes into a teardrop shape. Fry the mandocas in five-minute batches until they are golden brown.  Let them cool slightly and they are ready to serve. They are traditionally served with butter and cheese while still warm.

Directions: Cut the ends off of the plantains. Peel them and slice them all vertically into two long strips. Cut those strips in half horizontally. Heat the oil in a skillet and fry the plantains until they are a golden brown, then remove them from the oil and place on a plate covered in a paper towel to absorb oil. As soon as they cool, they are ready to eat.

Directions: Use wax paper to line an 11’’ by 17’’ pan. Pre-heat the oven to 350°. Sift the flour, salt, and the baking powder and set to the side. In a separate bowl, beat the four egg whites until soft peaks form. Add ¼ cup and continue to beat until the egg whites become stiffer. In a separate bowl, beat the egg yolks and and ½ cup of sugar until the volume triples. This should take about 5 minutes. Mix in the vanilla. Add the flour mixture to the yolks and gently mix them until they are barely blended. Carefully fold in the egg whites in the same manner. Pour the batter into the lined pan and spread until even. Bake the cake until it is golden and slightly springy. Run a knife along the edges of the cake to loosen it and turn it over onto a dish cloth that has been dusted with powdered sugar. Roll the cake up in the towel, and let it cool. As it cools, place the whipping cream into bowl and beat it until medium-firm peaks form. Whisk in two tablespoons of sugar and a drop of vanilla. Place the dulce de leche in a separate bowl, and add ¼ cup of the whipped cream to it, before folding that mixture back into the rest of the whipped cream. Unroll the cake and fill with the dulce de leche mixture. Re-wrap, and place in the fridge to chill for 1-2 hours. Once the cake has chilled, unwrap it and top with a dusting of powdered sugar. Cut off the ends of the cake to make it neat, and the cake is ready to serve.

Ingredients: 1 tablespoon of vegetable shortening, ½ tablespoon of salt, 2 cup of precooked corn flour, 2 cups of shredded mozzarella, vegetable oil
Directions: Mix 1½  cups of warm water, the salt, and the shortening in a bowl. Gradually add the flour, mixing it in quickly by hand so that no lumps form. Knead until the ingredients are thoroughly mixed, and then let rest for 5 minutes. Divide the dough into small balls of about 3 ounces. Place the balls between two pieces of wax paper with sufficient distance between them, and use a large plate or a wooden cutting board to flatten them. Remove the top layer of wax paper and put a tablespoon of cheese in the center of each piece of dough. Fold the dough into semi circles and press the edges closed using a fork. Once all of the empanadas have been made, refrigerate them for half an hour. As they chill, fill a large frying pan ⅓ of the way full with oil and heat over medium heat. Once the empanadas have chilled, fry them in groups of 2 to 4 for about five minutes until they are golden brown. Once cooked, they are ready to serve.