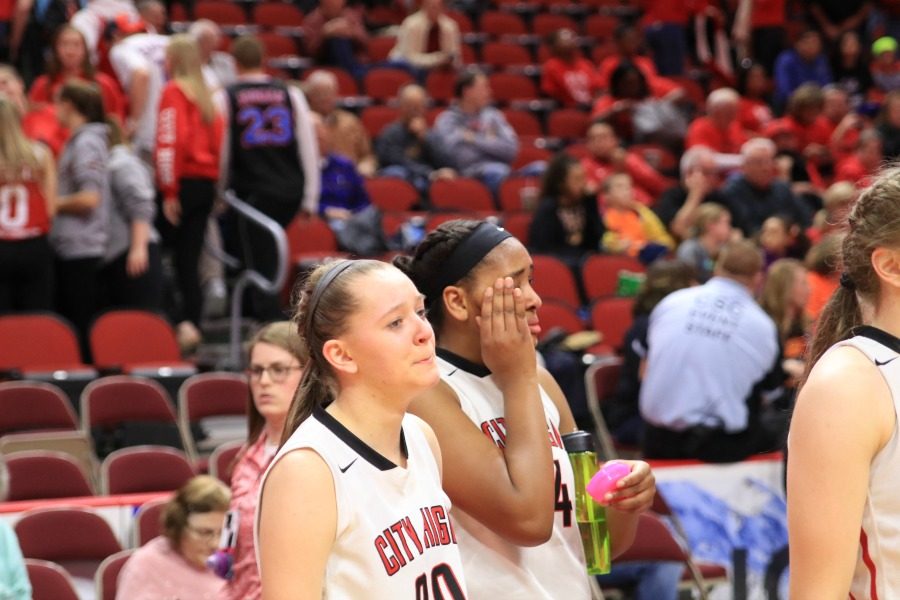 City High's Aubrey Joens '20 (#20) and Kenya Earl '17 react after losing to Cedar Falls in the first round of the state tournament.

After leading 30-23 at half time, the Little Hawks fell to the Cedar Falls Tigers 48-46 in the quarterfinals of the state tournament.

“We had some wide open shots and we couldn’t make them. We got good looks, they just went in and out,” City High head coach Bill McTaggart said of City High’s shooting in the second half.

The Little Hawks struggled particularly in the third quarter, scoring only five points. The Little Hawks allowed Cedar Falls to get back into it and led only by three 35-32 at the end of three.

Despite the third quarter struggles, The Little Hawks got off to a good start in the first half, in which Ashley Joens ’18 scored 18 of City’s 30 first half points.

“We felt pretty good at halftime and we knew we just had to keep putting it on, but we kind of let up a little bit,” Joens said.  They really started to pick up their defense, and we couldn’t seem to answer back.”

In the fourth, City High couldn’t seem to make many shots but was able to get to the free throw line. However, the Little Hawks struggled from the line, going only 10-17 in the game.

“We got to the line, we just have to bury them, and we missed some big ones there,” McTaggart said.

Cedar Falls’ Kiana Barney ’18 had the eventual game winning basket with 7.2 seconds to play. City High got the ball back with a chance to win but Ashley Joens lost the ball as she was driving through the lane, and Cedar Falls ran out the clock.

“They were ready for me when I was driving, it was just hard to get going on offense,” Kenya Earl ’17 said of the second half’s struggles on offense.

With the loss, the Little Hawks finish the season 22-2 while Cedar Falls moves on to play Indianola on Friday.