State and local officials are looking for a solution for a shortage of willing and qualified teachers in a number of subjects. 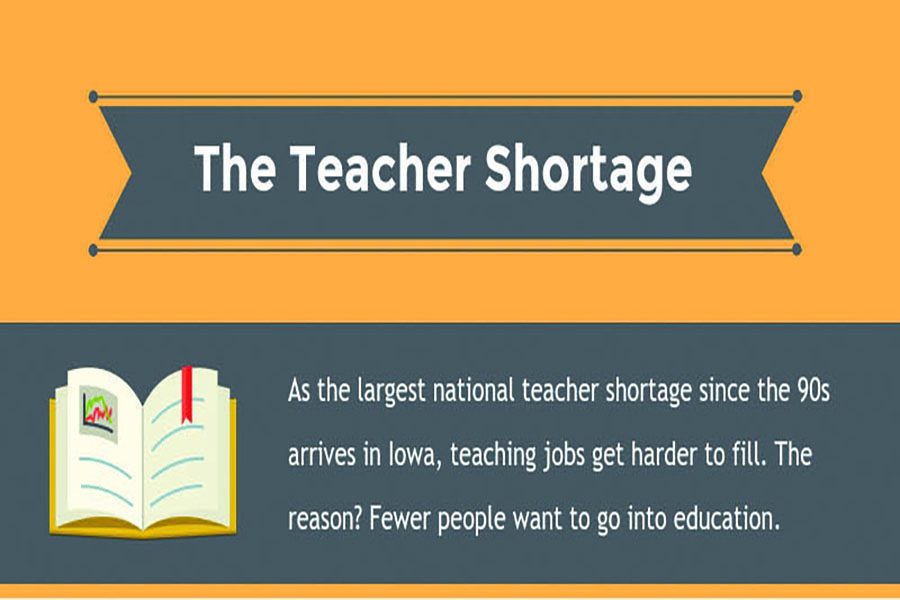 John Bacon, the principal of Iowa City High School, flips through dozens of applications for a new teacher opening. Whether it be in English, Chemistry, or Calculus, the time and consideration that goes into his final selection is immense. For Bacon, the hiring process is at the core to his role at City High.

“When you have a truly great teacher, everything just snaps into place,” Bacon said. “Hiring is my most important duty. It is sacred to me, and being able to have a great pool of people to choose from is always going to make the process better for me and for all of City High.”

City High is in a rare position, with applicants exceeding available openings by significant margins. On average, there are over 80 applications for a new teaching position, a number that many school districts in Iowa would envy. Over the past six years, it has become increasingly difficult for many Iowa schools to find qualified teachers to fill open positions. Cultural shifts in attitudes toward teaching and cuts in state funding have contributed to this growing problem, but the issue is complex and constantly changing.

“There have been shortages of teachers almost as long as there have been schools,” said Larry Bice, an Administrative Consultant in Educator Preparation at the Iowa Department of Education. “There are a number of reasons [for the shortages], a major one being that education changes. We see new subject areas and populations growing quickly, requiring new schools and more teachers.”

The shortage in Iowa reflects a larger trend across the nation, one which experts have been warning about for years. However, City High and the Iowa City Community School District, or ICCSD, have remained mostly insulated from this emerging problem.

“[Iowa City] is such a desirable place to live and a destination school district so I don’t know if this has hit us as hard as some places,” Bacon said. “I think rural Iowa experiences far greater challenges.”

While Bacon is optimistic for the Iowa City schools, statistics on patterns in teaching employment reveal an alarming trend. In the past five years, enrollment in teacher preparation programs has decreased by over 230,000 students, or more than 35%, nationwide. For certain parts of the country, the decrease has been much more dramatic. In California, teacher preparation enrollment dropped by 74% over a ten year period. Today, Iowa colleges graduate 16% fewer educational administrators, counselors, and teachers than they did in 2013.

The shortage has left some school districts in Iowa struggling to even get applicants. In Iowa City, special education, English Language Learners, or ELL, and foreign language programs have had the most difficulty hiring new staff.

“Currently in Iowa, the greatest shortage need is in the several areas of special education, at all grade levels,” Bice said. “Following that we have shortages in high school shortage areas such as physics, family and consumer science, industrial technology, business, librarian staffing, and agriculture education.”

For City High, however, the most pressing issue is not full-time teachers at all, but substitutes.

“We have dealt with a shortage in being able to keep in demand with substitute teacher and long-term substituted teachers,” Bacon explained. “We’ve struggled to find qualified teachers that are able and willing to step into that role.”

A lack of substitute teacher provides a challenge that is very different from that of finding qualified full-time candidates, but nonetheless has emerged as a challenge for ICCSD in the past years. But similar issues exist in different regions of Iowa , with often great consequences to the learning environment of a school or district.

“The teacher shortages often mirror populations,” Bice said. “We have a number of school districts in Iowa with fewer than 1,000 students in the entire district. The shortages in these districts are generally more severe than in urban areas. “

In rural districts, shortage in full-time teacher staffing can have a serious impact on these districts’ abilities to provide a consistently quality education.

“There is a definite negative impact for schools that are not able to find teachers to teach certain subjects,” Bice explained. “The students are impacted by either not being able to take courses they want, or being in a class with a large number of students.”

As shortages develop and often remain, rural districts have been working more with officials at both the state and local level to alleviate teacher shortages in whatever ways they can.

“The Department of Education is limited in its authority to make changes directly. We work closely with others, however,” Bice said. “One agency, the Iowa College Student Aid Commission, has the authority to award money to teachers who teach in shortage areas. We work with them to help identify teachers eligible to receive money.”

Even as the Department of Education moves to address the issues where they can, the variables that contribute to shortages of full-time and substitute teachers can vary greater and be difficult to approach.

“There are a lot of suspected causes being discussed and researched. Some are cultural: Do we hold teachers in the esteem that we should? Some are financial: Do we pay teachers what we should?” Bice said. “Others are geographic: How do we draw teachers to relocate to rural communities? It is not easy to become a teacher. Some shortage areas, such as special education, require even more learning.”

The decline in interest and importance placed on teaching has been increasingly well-documented. The average pay of teachers is over 11% less than jobs with similar requirements, and today, only 35% of teachers report satisfaction with their jobs, the lowest number in 25 years.

Jennifer Brinkmeyer, a City High English teacher and the ICCSD Language Arts Curriculum Coordinator works to ensure that the core language arts education offered by ICCSD is uniform across the district and compliant with state standards. Operating between City High and ICCSD, while remaining in dialogue with the state, Brinkmeyer has seen many variables of the shortage at play.

“[The substitute shortage] doesn’t really have to do to much with funding,” Brinkmeyer said. “Few people want to do the job. You have to find someone who is available to work a flexible schedule and doesn’t need healthcare, which is a tall order. And they need to have at least a bachelor’s degree in something and not actually be doing something with it.”

But even with a locale such as Iowa City, reductions in state funding always loom as a potential threat to staffing, one that more greatly affect a school’s atmosphere than shortages in substitute teachers.

“A few years ago we had to cut money from our budget, and City and West had to both lose six teachers. Now, the district has set goals so that nobody will actually have to lose a job,” Brinkmeyer said. “They might be transitioned into a different role that is not necessarily in the classroom so they can at least still have a job.”

Districts like ICCSD often appear immune to teacher shortages generally associated with rural areas, but cuts in state funding can have serious consequences and threaten the wide selection of qualified applicants.

“Some of those positions we lost have never been filled back in, and this year our district is facing a one million dollar budget shortfall,” Brinkmeyer said. “It remains to be seen if staffing will be affected by this.”

At the Iowa Department of Education, some solutions have emerged, but the complexity of the shortages make them difficult to address in single sweeps of policy.

“Recently, the Iowa legislature passed a law to award money to new teachers who finished in the top 25% of their college graduating class and teach in shortage areas,” Bice said. “Another agency, the School Administrators of Iowa, used our shortage information and our help to bring together school administrators from across Iowa to meet with teacher preparation faculty across Iowa to work together to reduce shortages.”

Back in his office, Mr. Bacon is still looking through applications. He’s conferred with district official and school faculty and much deliberation, is ready to make a decision. Quickly, an official announcement follows and a new teacher is welcomed to the staff of City High. But that luxury of competition and choice is not a one shared across Iowa, and as potential challenges emerge, Bacon continues to work towards hiring and retaining the qualified teaching staff at Iowa City High School.

“Anytime we get a new member it is an awesome responsibility,”  Bacon said. “Teaching is such a critically important profession and being able to attract the best and brightest to education is an investment that pays off in so many ways.”