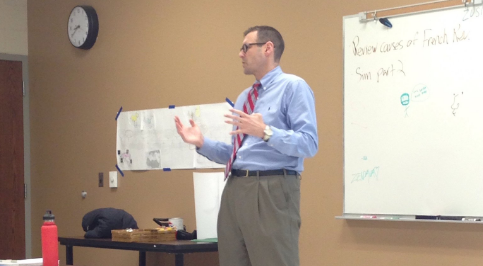 After Student Senate finalized next year’s funding for each club, the room anxiously began chattering as Principal John Bacon was about to deliver the verdict on the heated debate over who should be allowed to run for the presidential and vice presidential positions for the class of 2018.

“My heart leaned toward those good souls that are at Hy-Vee in the mornings and cleaning up streamers at the end of homecoming instead of eating at Village Inn with their friends,” Principal Bacon said. “My mind pulled me in the other direction. Intellectually, I agreed with the other side of this argument. I think you can make a stronger case for wide-open freedom to run.”

Bacon believes if McMillan and other students who were not at necessary Student Senate meetings were not allowed to run, it would only make the issue worse.

“I believe any time you try to suppress or constrain something like [this issue], that is when you wind up having the opposite effect.”

Because of this, Bacon decided that a compromise was necessary.

“We did not adequately communicate this rule change this year, and I take some responsibility for that.” Bacon said. “People can run who want to run with the caveat that they need to start attending Student Senate regularly throughout the third trimester.”

However, future class elections will have more strict rules. Students who want to run will have to announce their candidacy by a certain date, and there will be reminders for this date in the daily announcements every day for two weeks along with a statement read in each English class about running for the positions. Candidates will then have to attend the majority of Student Senate meetings after announcing their candidacy.