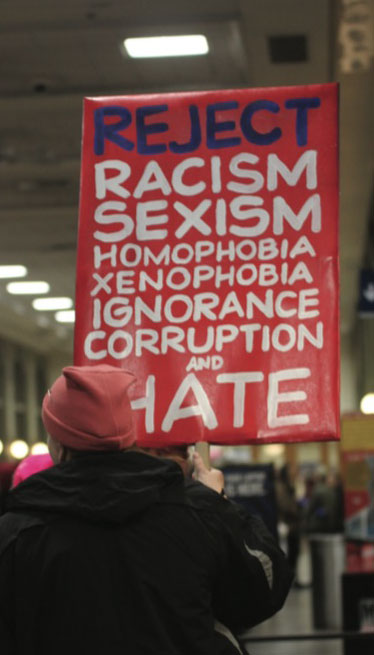 Those were the words that Donald Trump defended his second travel ban with after a stay was put in place by a federal judge in Hawaii. But despite Trump’s insistence that this ban is for public safety, this order makes America more dangerous.

Islamic extremism is undoubtedly a major global problem. Extremist groups like ISIS are responsible for thousands of deaths worldwide each year. Less than a year ago Omar Mateen killed 49 people in his attack on a gay nightclub, perpetrating the worst terror attack that the US has seen since 9/11 in the name of ISIS.

However, terrorism being a global problem does not make it a domestic threat in America. Only those 49 people were killed in terror attacks on American soil in 2016. The deaths were all part of one attack, perpetrated by a New York-born man. This ban, which suspends immigration and the refugee program from Iraq, Libya, Somalia, Sudan, Syria, and Yemen, wouldn’t have prevented a single death in 2016.

Immigrants and people traveling on visas are already under a stringent vetting system, comprising of background checks, checks on terrorist watchlists, and in-person interviews. People use these visas both to visit and to live and work, as students, teachers, entrepreneurs, etc. Barring these people does not make the US any safer.

What this ban does is single out people from specific countries for particularly harsh treatment. And, whether intended or not, this ban is seen by both its supporters and detractors as an attempt to prevent Muslims from entering the US. America is increasingly seen as being in opposition to Islam, both on the international stage and by Americans who agree with the sentiment.

There is a great deal of danger in that sort of rhetoric. The greatest terrorist threat that the US faces is domestic, and language like this only invites radicalization of American citizens who feel targeted and excluded. This threat extends overseas as well. ISIS uses material like this ban as recruitment fodder to give credence to the idea that Islam is at war with the West.

Along with section 2, section 6 of the executive order targets refugees specifically, suspending refugee admissions from the 6 countries and reducing the overall number of refugees that the US will accept from 110,000 to 50,000. Refugees coming to America already face a stringent vetting process that includes several security checks and screening. They are also made to attend a cultural orientation class to allow easier transition into American society. The entire process can take up to two years, during which the potential refugees live in limbo.

The irony of this section of the order is that it does very little to better protect Americans, instead targeting the victims of violent Islamic extremists, rather than the perpetrators. According to the Cato Institute, the odds of being killed by a refugee in a terror attack is 1 to 3.64 billion. (Keep in mind that there are only 7.5 billion people on this planet. That makes selfies, which led to the deaths of over 50 people in 2015, more dangerous than refugees.)

Between 1975 and 2015, over three million refugees were admitted in the the US. During this 40 year period, only 20 refugees, or roughly 0.00062% of the total, turned out to be terrorists. Out of those 20, only 3 managed to carry out fatal attacks. They were all Cuban refugees, who killed 3 people in a series of attacks during 1970s before the Refugee Act of 1980 established vetting procedures for refugees.

Rather than posing any extremist threat, refugees are the ones whose lives are threatened by domestic terror. They are fleeing the violent conflicts, starvation, human rights violations, and extreme poverty caused by the various wars and conflicts in the region. Hundreds of thousands of civilians have died and millions more are displaced as a result of these conflicts. In Syria alone the civil war has displaced over 6.3 million people. As one of the largest and most prosperous nations in the world, the US has an obligation to help these people, particularly given that American foreign policy has contributed to, if not flat-out caused, this refugee crisis.

To do anything other than help is to play into the extremists’ narrative about the West. It gives terrorist groups further evidence of the West’s immorality and hatred of Islam, providing them with more recruitment material. This order makes America less safe, and it does so at the expense of innocent people.

Terrorism is an act of fear and coercion. This executive order preys on the fear of millions of Americans who, justifiably or not, see the Middle East as the enemy. The more we allow this fear-based policy to dominate our politics, the more we allow terrorism to be an effective tool. If we don’t let fear control us, we strip terrorism of its power over us and allow ourselves to help thousands of people. In this sense, we truly have nothing to fear but fear itself.