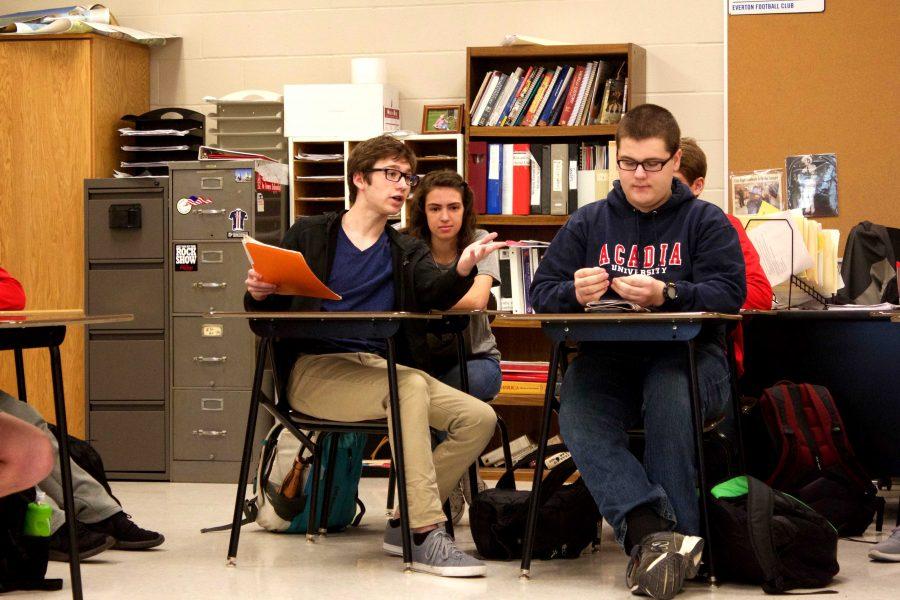 In recent months, the Student Senate reversed its stance on who is eligible to run and changed the rules for next year–changes that sparked controversy on social media and in the hallways.

“When we have people in charge who have not been to meetings or do not understand how it works, there tends to be a lot of delegating to people that do know how it works,” said four-year member Natalie Holmes ‘17. “So you don’t get the title, but you’re doing the work.”

The issue started years ago when it became a pattern that Student Senate had only a handful of active members until candidates declared their running. Attendance would rise throughout the election season (owing to the rule that all candidates must make meetings) but fall off sharply shortly thereafter, leaving the Senate with just a few dedicated newcomers by the end, according to Tygrett, a teacher advisor. Student Senate began to have concerns about a candidate winning who would be ill-prepared to hold office.

“I have seen people run for Student Senate as a joke, as a popularity contest, as a means to try to get something on a college application. I’m just not really [a fan of] that because this is a really important role,” Steve Tygrett, one of the three teacher advisors, said.  “When you go to the school board meetings, you’re the representative of City High School, and if you’re not taking that seriously, that’s an issue. And if you’re not here at 8:15 every Wednesday, with an agenda ready to go, ready to lead, ready to delegate tasks to other people, that affects the entire organization.”

In January, a new guideline for the election process was written by a committee within the Senate and voted into legislation. This rule stated that those who wished to run for any student senate office had to have attended at least half the year’s meetings. The section passed and was written into the revised constitution.

“We really need to make it a priority that we fix the constitution and make sure that only people who are active members of [Student Senate] can participate [in the election],” Student Senate President Lucy Wagner said in reference to a belief expressed adamantly by Vice Principal Jespersen.

The week before spring break, Patrick McMillan ‘18, an aspiring vice presidential candidate, attended his first meeting and explained to students he intended to run. Due to the revised constitution, he was ineligible to do so.

Pushback on the issue grew on social media—specifically Twitter. An anonymous account named City High Inquirer gained attention by loudly proclaiming its support of McMillan’s right to candidacy. McMillan’s goal of vice president gained traction and a petition was created and promoted by his younger brother Thomas McMillan ‘20, stating that he should be allowed to run; the petition eventually gained signatures from over 300 City High students.

As the matter gained more and more attention, Student Senate planned an emergency meeting where Principal Bacon would hear both sides of the debate and decide if McMillan should be allowed to run. This meeting was flooded with newcomers in support of McMillan.

The debate involved several members of the Senate, as well as McMillan’s supporters, each with their own side of the story.

“I will claim…authorship of that amendment,” Teagan Roeder ‘17 said of the motives behind the policy change. “What I had originally intended was essentially [this]: I just want to see an efficient Student Senate, one that can operate credibly and effectively. I come here every Wednesday morning at 8:15 to make sure that students are having the best time we can provide … and I just see it as unfair that someone, without coming to meetings regularly, gets to lead it next year.”

However, McMillan believes, “There shouldn’t be prerequisites put in place to keep people who would like to run and didn’t know about these things in the first place,” McMillan said. “Your attendance for a club should not determine your eligibility for a school-wide election.”

The debate officially stopped at the end of the hour, but a verdict was not immediately clear; allowing both  sides’ arguments to sink in, Principal Bacon promised to return the following Wednesday with his final decision.

“My heart leaned toward those good souls that are at Hy-Vee in the mornings and cleaning up streamers at the end of homecoming instead of eating at Village Inn with their friends,” Bacon said. “My mind pulled me in the other direction. Intellectually, I agreed with the other side of this argument. I think you can make a stronger case for wide-open freedom to run.”

Bacon believes that if McMillan and other students that were not at necessary Student Senate meetings were not allowed to run, it would only make the issue worse; because of this, Bacon decided that a compromise was necessary.

“We did not adequately communicate this rule change this year, and I take some responsibility for that,” he said. “People can run who want to run with the caveat that they need to start attending Student Senate regularly throughout the third trimester.”

However, future class elections will have more strict rules. Students who want to run will have to announce their candidacy by a certain date, and there will be reminders for this date in the daily announcements every day for two weeks along with a statement read in each English class about running for the positions. Candidates will then have to attend the majority of Student Senate meetings after announcing their candidacy.

“I believe any time you try to suppress or constrain … [a population’s rights], that is when you wind up having the opposite effect,” Bacon said.