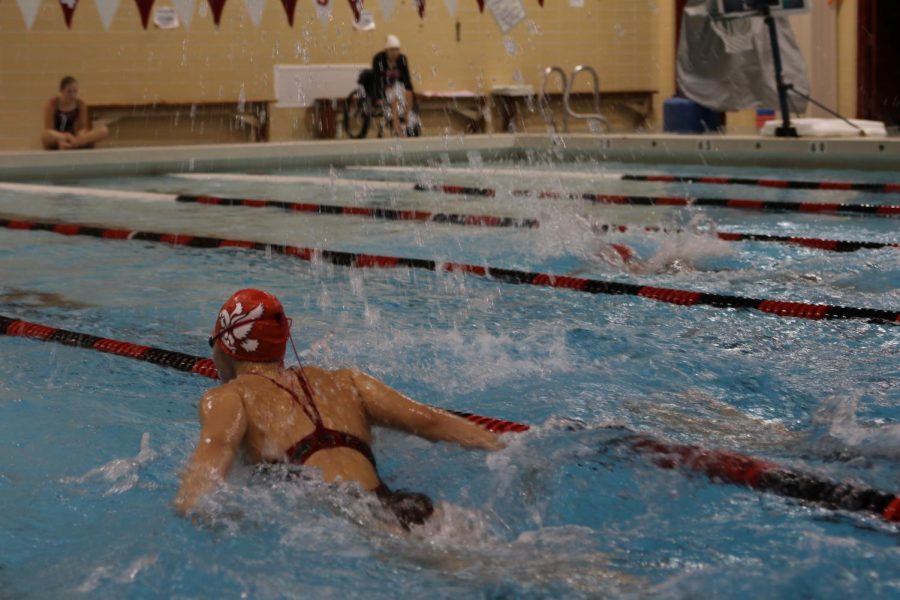 Carly Weigel '20 swims the butterfly at the Little Hawks' dual against Williamsburg.

Heading into the State Meet tomorrow, the girl swimmers have been preparing to be as physically prepared as possible. They’ve been tapering for two weeks and have overcome the midseason bout of sickness that swept its way through the team in September.

Last Saturday in Marshalltown, the team qualified a medley relay and a 200 free relay. Trinity Sadecky ‘20 and Carly Weigel ‘20 both punched their ticket in the 200 free. Sadecky is also swimming the 500 and Weigel the 100 backstroke.

Sadecky went into the Regional Meet with one goal:

Among the state-qualifiers are two seniors, one freshman, and two sophomores. A team that is comprised of mostly underclassmen is believed to be as a positive.

“We have a lot of new underclassmen, like freshman, who have really changed the team dynamic this year,” Captain Clara Froeschner ‘18 said. “I think they’re becoming the program. My freshman year we had 12 people, and half of the team were freshmen. Now, we’re having bigger and bigger freshman classes coming in which adds depth.”

The added depth resulted in the program’s largest team in history which contributed to the Regional meet’s fastest times of the season, including three times surpassing the school record mark. Carly Weigel ‘20 broke the 50 free record, which is the oldest record on the board– from 40 years ago. Weigel is also .02 seconds away from getting the 100 back record, an event that she will be swimming at State this weekend. The 200 free relay consisting of Carly Weigel ‘20, Rika Yahashiri ‘21, Clara Froeschner ‘18, and Trinity Sadecky ‘20 also broke the existing record, as well as the 200 medley relay including Weigel, Yahashiri, Laura Lorenger ‘18, and Sadecky.

“It’s the time of year where I expect a lot of fast swims so I wasn’t surprised that people dropped time, but some of them were pretty big drops that I was pretty happy with,” Hugo said. “Now it’s just a matter of what can we do to make those fast swims even faster. We’re looking for improvement anywhere we can find it.”

In order to do that, Hugo believes that focusing on the details is what will make the difference.

“We focus a lot at the beginning of the season on improving our physical fitness and we’ll test that throughout the season. As we get towards the end of the season, we’ll focus more on strength and power and improve our technique in order to have good technique when we are going as fast as we can.”

With this added focus on the “little things” and the endurance built up throughout the season, Hugo believes his team has great potential for success at the State meet.

“We had a winning record in the conference this year and we have a strong conference for swimming, so I think that shows that we can step up against almost anybody in the state.”