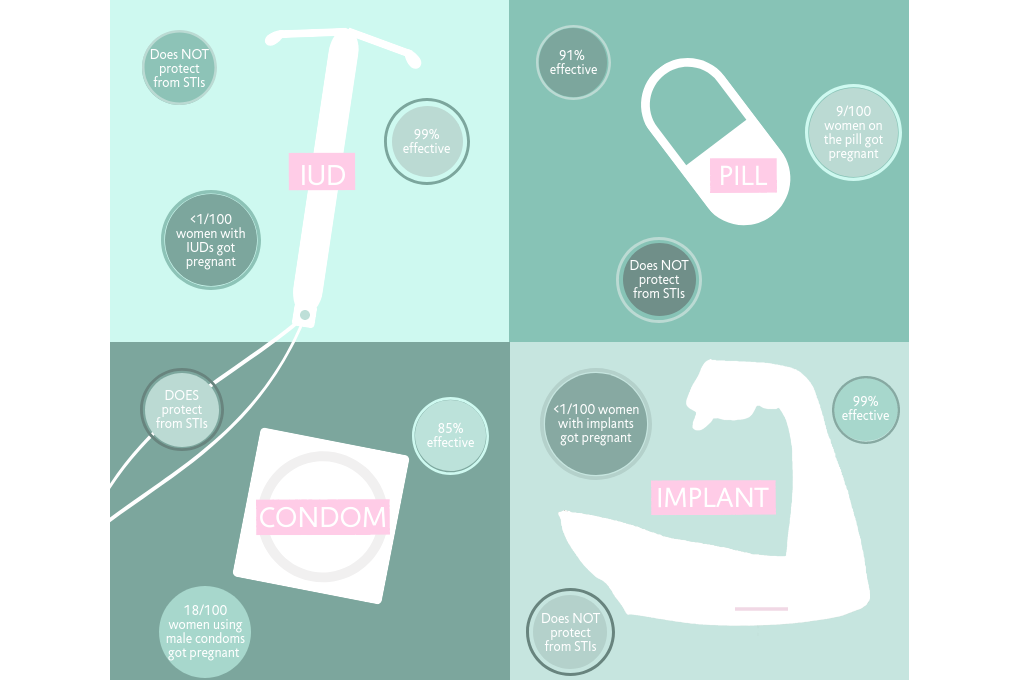 Nearly 90% of teens who are sexually active used birth control the last time they had sex. However, data shows that the majority of teenagers use condoms and birth control pills as their form of contraception. When not used consistently or effectively, these forms of birth control on their own are not effective enough at preventing pregnancies–and it shows.

The next step in reducing today’s teenage pregnancies is educating today’s youth, parents, providers, and teachers on more effective birth control options for teens. These other options include LARCs, “Long-Acting Reversible Contraceptives,” which are over 99% effective in preventing pregnancy. The two most effective LARC options are intrauterine devices (IUDs) and subdermal contraceptive implants.

An IUD is a tiny device inserted in the uterus that can protect from pregnancy for anywhere between 3 and 6 years. IUDs are divided into 2 types: copper IUDs (ParaGard) and hormonal IUDs (Mirena, Kyleena, Liletta, and Skyla).

Subdermal contraceptive implants involve the delivery of a steroid progestin from polymer capsules or rods placed under the skin. The hormone diffuses out slowly at a stable rate, providing effective birth control from anywhere between 1 to 5 years.

(However, LARCs don’t protect against STIs, and it is still recommended to use condoms to prevent contracting STIs and further prevent pregnancy.)

LARCs provide teenagers with more freedom, with the opportunity to gain even more control of their bodies, with the knowledge that pregnancy is something they don’t have to worry about for years, locking in whatever future they choose to pursue. So why is it that the use of LARCs among teens seeking birth control services was only 7% in 2013?

First, many teens know very little about LARCs. Some mistakenly believe they cannot use LARCs due to age. Additionally, high up-front costs for supplies are an issue for certain insurance providers, and some have shown misplaced beliefs about the safety and appropriateness of LARCs for teens. Lastly, some medical care providers may lack training on insertion and removal of intrauterine devices and subdermal contraceptive implants.

Some of the most qualified and reliable medical sources in the nation, including the CDC and the WHO, as well as organizations dealing more specifically in these issues, are saying that LARCs are the most effective and beneficial types of birth control for teens. In Colorado, teen pregnancy rates have gone down 40% since LARCs became accessible for young people.

These methods should be made available to teens at lower prices and with less risk. We need to accept long-acting reversible contraceptives as a safe and appropriate way to prevent unwanted teen pregnancies in today’s society–because that’s what they are.