City Prepares to Wrestle West for ‘Pack the Gym Night’ 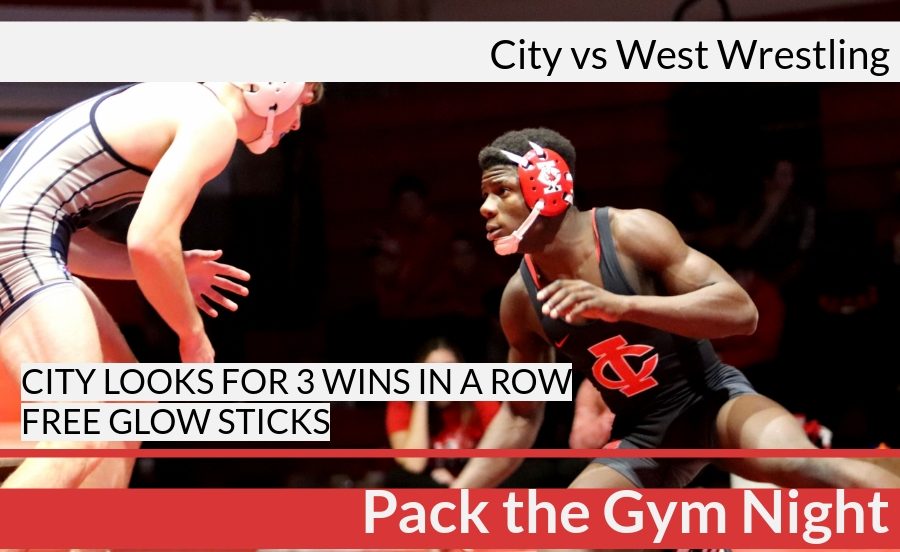 Three-pete. That phrase will be on the mind of every City High wrestler on Thursday night. That’s because the Little Hawks will have a chance to do something they haven’t done in decades: win the City vs West Dual Meet for the third year in a row.

The rivalry has always been defined by its lopsidedness. During the “Glory Days” of City High wrestling (the 1990s and early 2000s), the Little Hawks consistently dominated their Trojan rivals. In that period, City won three traditional state titles and two dual titles, consistently finishing in the top ten at state. The rivalry with West High was hardly in the forefront of their minds.

The series shifted as City High’s program took a downward turn in the middle of the decade, just as their rivals on the west side grew into a powerhouse. During City’s prolonged time as relative league bottom dwellers, the Trojans won two traditional state titles and five dual team titles. When head coach Cory Connell took over for the Little Hawks, a dual win against West High would have been unthinkable.

Now, City High is looking for its third straight win in the annual series. It may be a watershed moment in the rivalry. Is the tide turning back in favor of the up-and-coming Little Hawks, or has the series reached an unprecedented level of equilibrium? Thursday night will go a long way in answering that question.

City enters the dual ranked ninth, while the Trojans come in at number four. It is important to note that these rankings are based off of projections for how these teams will perform at the State Tournament. That doesn’t always correlate to dual meet success. For example, a team might finish well in the State Tournament due to the high placing of a few standout wrestlers, but do poorly in dual meets because other weights are not so consistent.

The Little Hawks will hope that is the case on Thursday. West High enters the competition with two top ranked wrestlers in 160 pounder Nelson Brands and 220 pounder Francis Duggan. Still, City’s lineup is solid from top to bottom, and can count on making back many of the points that could be lost in those matches. The Little Hawks also feature star wrestler Jacob Dykes at the 195 pound weight class, who among a few other Little Hawks seems poised to grab some big points off of pins.

Going through each match, a few standout. The meet could well come down to both team’s performances in the 106, 126, 170, and 285 pound weight classes.

Ethan Wood-Finley ‘20 will represent City at 106. Last year’s meet came down to the last match of the night, where then-Freshman Wood-Finley sealed the dual with a pin. Ranked in the top 5, the Little Hawks will need him to come through in the clutch again. He will face Trojan Junior Hans vonRabenau, who made the State Tournament last season.

Reece Caven ‘20 can also help out the Little Hawks at the 126 pound weight class. He has started his debut season on the varsity squad strong, with multiple key wins under his belt. If the Sophomore can flip his match, it will go a long way in ensuring a Little Hawk victory. He will take on Senior Alex Aguirre, who also made State for the Trojans last year.

At 170 Joe Ring ‘19 will have a chance to snag an important win for The Little Hawks. Ring missed all of last season due to a shoulder injury, and Thursday will be his first chance to wrestle West High in his varsity career. A win from Ring would be a huge swing in favor of the Little Hawks.

Finally, weighing in at 285 for City High is Jacob Murry ‘19. Murry has been the starting Little Hawk heavyweight for his entire high school career. He has never beaten his Trojan-counterpart, Senior Guy Snow. Still, Murry has shown great improvement this season. A win over his ranked foe would not only be likely to propel him into the top ten, it would be a huge point shift in favor of the Little Hawks.