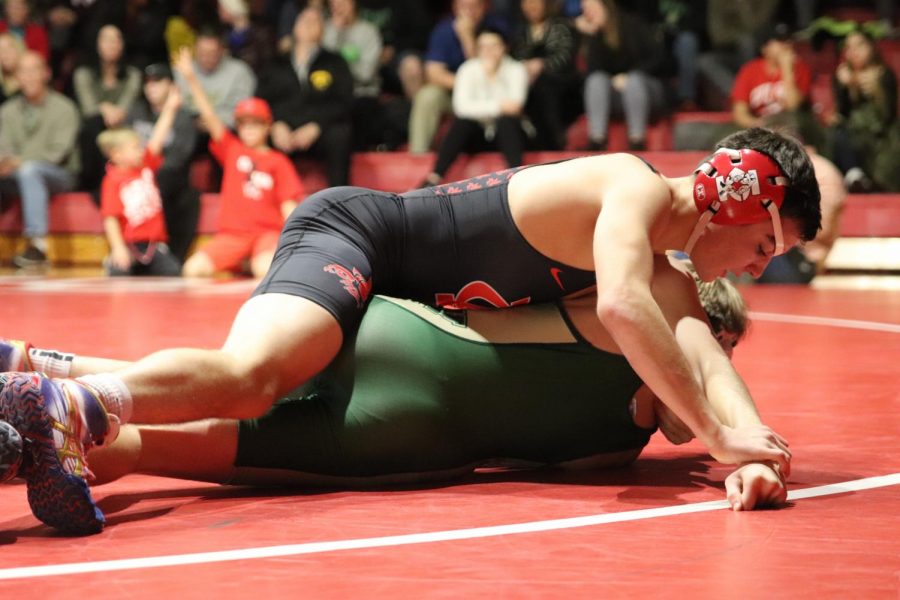 Matt Rew '20 pins his opponent in one minute during the Little Hawks' meet against West High on December 14th.

The gym was aglow with hundreds of glow sticks. Lit up in the center lay the wrestling mat. Two rivalries dating back to 1968 faced off. All eyes were on the prize: rights over “the belt.”

A combination of glow sticks and free merchandise joined together to fill seats in wrestling’s “Pack the Gym Night.” This year, the annual City versus West wrestling meet was held at home. At the end of the 45-minute meet, the Little Hawks left with 47 points more than the Trojans, making two wins in a row for City, something that, before last year, hadn’t happened since 2002. 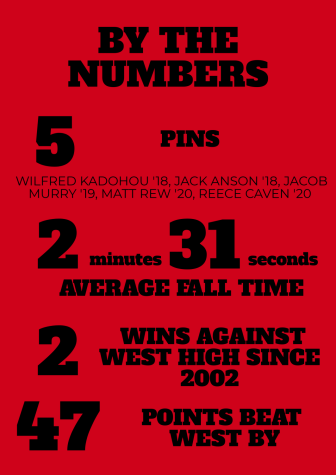 “I mean, you come out here and put up 63 [points] on a team like West, it’s just great for the kids to see what they can do,” Coach Connell said.

Joey Harney ‘18 won his match by forfeit in the 138 lbs weight class. Harney believes that the turnout of “Pack the Gym Night” gave the team an extra boost to compete.

“It was really exciting for us to have so many people in the gym tonight,” Harney said. “I think that really helped some of the guys win their matches.”

In addition to the strong crowd support, Harney cited Coach Connell’s emphasis on the basics for his success.

“He emphasizes the basics. Basics win matches,” Harney said. “Don’t try anything huge if it’s not there. Stick to your basics and you’ll get the job done.”

That strategy seems to be paying off for Harney and his team. In Harney’s mere four year tenure at City High, the Little Hawks went from having a losing season to having the highest place finish—tenth—out of every team in the MVC conference, including West.

“As a freshman we came in and we lost to [West], like we had throughout the years. I think my sophomore year was the first time we had beat them in like a decade,” Harney said. “It feels really great to be keeping the streak going.”

City High’s new tradition of winning wherever they go has sparked confidence in the team. Harney thinks this dominance is here to stay for a while.

“I think that our team is progressing, our program is getting a lot better. We can definitely keep this up,” Harney said.

With confidence and a powerhouse reputation, Coach Connell has noticed some standout wrestlers, one of which was Jacob Murry ‘19. Connell was very impressed with his performance against the number six heavyweight in the state.

“I’d say Jacob Murry was wrestler of the night tonight,” Connell said. “Guy Snow is number six in the state and [Murry] got beat by him three times last year. To go out there and wrestle him as hard as you can and then stick him is pretty awesome.”

Sporting an undefeated dual record, Connell is enthusiastic about the remainder of the season.

“I feel we are a lot further along this year than we were at this time last year. I feel we got a lot better throughout the year last year,” Connell said. “If we are able to make those kind of improvements this year, we can accomplish some great things, so we need everyone to buy into the process of becoming great.”