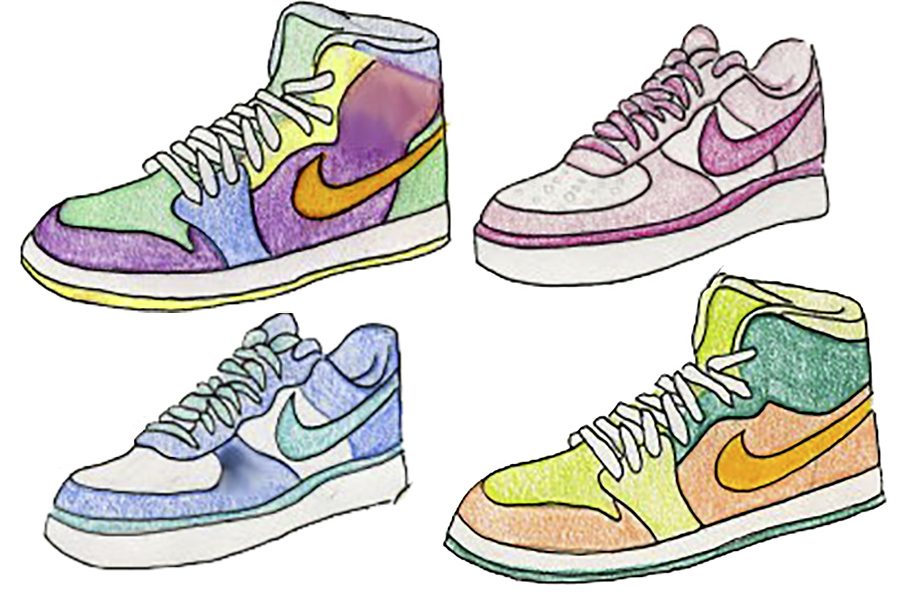 What may look solely like a pair of shoes to one person, looks like dollar signs to another. For years the trend of sneaker-reselling has been on the rise. But something that was once limited to eBay and message boards have become a billion-dollar industry thanks to social media.

The Shoe Game has changed, and juniors Michael Santoro and Brady Herzic are some of the many that have enjoyed the large profit to be made from foot fashion.

Michael Santoro’s has grown up in a family that owns a business and says he has always had an entrepreneur’s mind. When he first learned of the art of shoe-flipping over a year and a half ago, he knew had to get into it.

“I think I had seen an article online once that said a pair of 245 dollar shoes flipped for like 7 or 800 dollars,” Santoro said. “From there I just bought the shoes that I hoped would sell for more than what they go for and then I just kind of learned more as I went.”

Santoro has noticed the industry evolve even over the past year and a half.

“Releases are more often now because it’s a more competitive market between Nike and Adidas so they have to release more to keep up. When I first started selling shoes, it was only Nike shoes. Then last year it was only Adidas shoes. So they’ve both had to ramp up what they both do to keep up with the markets and supply and demand.”

Because of the demand for their shoes, these companies have had to put restrictions on the number of pairs one buyer can get. Santoro’s typical regimen involves the use of some technology that allows him to weave around the restrictions.

“If it was a week of releases, most releases are on Saturday, I’d set up for that depending on what [shoe] it was,” he said. “Depending on what the brand is that’s dropping it I set up the software so it goes through the site and then buy proxies and a server for it so it can go through that and mass the IP, and that hopefully guarantees multiple pairs.”

Santoro has noticed that Yeezy’s are the easiest shoe to sell. He’s also identified concepts that he’s learned about in Mr. Leman’s classes.

Although Santoro benefits off other people wanting the shoes he re-sells, he doesn’t actually care for the shoes themselves.

“I don’t see the need to wear an expensive shoe when I can just sell it for more.”

Santoro’s successes have not gone unnoticed. When Brady Herzic ‘18 found out about the behind-the-scenes business of a pair of Yeezy’s, he too, was intrigued.

“I’ve always liked shoes, I’ve just always been into them,” Herzic said. “When Michael told me how much he was making from selling them, I was like ‘I wanna get into this’ and that’s how it pretty much all started.”

Like Santoro, Herzic’s parents own their own restaurant, Orchard Green. Herzic believes shoe flipping is something he has been destined for after many years of listening to and working with his parents on their business.

“[Shoe flipping] is an easy way to make money without having a job and having to do actual work, like hands-on stuff.”

Herzic first began selling Jordan’s, but soon realized that they were difficult to sell. Since then he’s decided that he’s never going to buy a pair of Jordan’s unless he’ll wear them and has shifted his focus to a highly sought after brand.

“Adidas is the easiest to sell because everybody wants Adidas right now. Everyone has them, everyone wants them.”

Although Herzic doesn’t buy shoes in as large of a quantity as Santoro does, he has learned what works for him.

Because Herzic invests so much in buying shoes, purchasing a fake pair is something he has to be cautious of.

“Now it’s hard to tell if a shoe is legit or not, but there’s some fakes that are obvious, like you can just look at them and tell. Plus I have decent knowledge so I can look at them and tell if they’re fake,” he said. “There’s certain ways to tell, like on the bottom of Yeezy’s, there’s a white triangle called the boost and that’s a really easy way to tell.”

Both Santoro and Herzic just have one piece of advice for anybody interested in doing what they do.