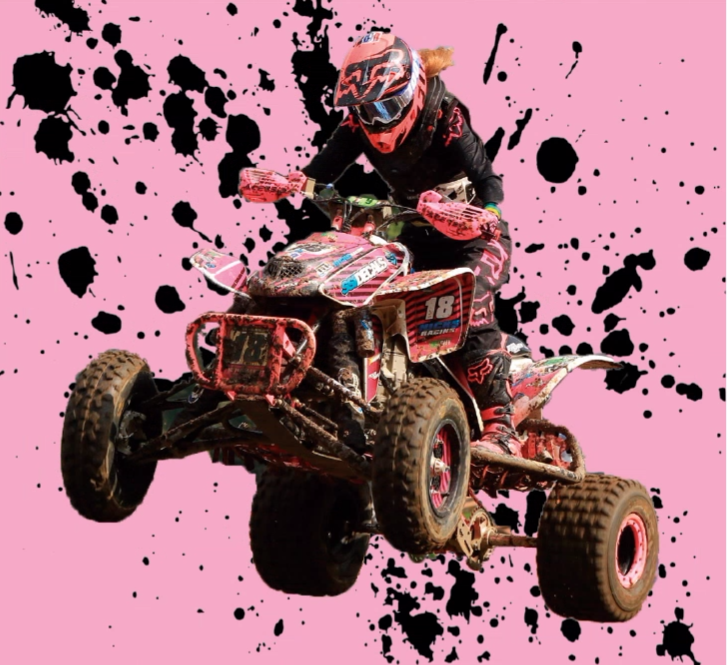 What first began as a youthful affinity for mud would later lead to a more serious passion for Krystal Fisher ‘18.

“I love the mud. Mud’s the best. I’d rather go play in the mud than go shopping with my friends, it’s just my thing to do,” Fisher said. “I’ve always had a passion for motorsports, cars, and trucks, and as I got older and bigger, the toys got bigger [too].”

Although Fisher’s been riding farm-utility four-wheelers since she was four, her love for racing four-wheelers didn’t come until more recently.

“Two or three years ago I was out at the practice track just riding around, when I saw people on these race quads jumping them and I turned to my dad and said, ‘I want to do that.’ So then the next day we went to the dealership and got one,” Fisher said.

Little did she know how much that decision would affect her life. While she was adopting a new passion, a new family would soon adopt her.

“The motocross family is very close to each other. If someone breaks something, but someone else has the part, they’re like, ‘Here.’ If one of us breaks down, we’ll all swarm and try and help to get them into the next race.”

To prepare for her eight-month competition season, Fisher practices twice a week, weather depending. She uses her racing friends’ practice tracks in either Solon or Cedar Rapids. These practices are especially crucial for the endurance aspect of her sport.

“A motocross race is 20 minutes of very active, high energy work of muscling around a 200-pound bike for 20 minutes. It’s a combination of man and machine, so you gotta work together.”

When Fisher says “man”, she means quite literally. According to her, the sport is “basically male-dominated”. Fisher is one of the few females in the state that races, and one of the only females in the surrounding states that races a four-wheeler. Fisher flaunts her unique role by wearing pink gear— a color stereotypically associated with females. To match her pink gear, Fisher rides a pink 2012 Honda 250 quad custom-made for her by a race friend.

“Racing against all guys… I’m just like, ‘Pink’s not my color— I’m not a pink person, but I’m just like, ‘You know what? I’m gonna go pink so I can be ‘girly’. I want the crowd to know that it’s a girl out there beating the boys.’”

Fisher’s out putting her skills to the test most weekends in the summer. District 22 is responsible for motocross events across Iowa, and for each competitor the scores two races per weekend are combined for an overall score. Points are awarded for the overall scores which are then tallied at the end of the season to determine placing within the District.

“[During a race] the course is the same for everybody. [However], there’s different classes like beginners, medium, and other classes based on skill-level. There’s also age classes and classes for different sizes of bikes like a little four-year-old can ride a little one, or a forty-year-old can ride a big one, just not in the same class. I used to be in Quad450C in Women’s at National’s, but this year I’m moving towards dirt bikes so I kind of have to start all over again in the classes. This year I’ll be in 250C in Women’s.”

Although Fisher is considered a late-starter amongst her peers, she would one day like to take her passion to the professional level. Due to the increased level of safety, she is considering switching her dirt-bike wheels out for a larger set.

“I hope to be a monster truck driver. Roll cages are safer and you can be in there a lot longer.”

One of Fisher’s motto’s is, ‘Work until your idols become your rivals’ and she has already began to mingle with her future potential competition.

“I really like the ATV pros like Thomas Brown, Joel Hedrick, and Chad Wienen— the top three guys in the nation. I’ve ridden with them a few times over the years, doing riding schools with them and stuff. I look up to them and we keep up with each other on Facebook and Instagram.”

There are sure to be more than a few bumps on the many dirt courses that lay ahead of Fisher, but facing adversity won’t be anything new to her. In October of 2016 Fisher shattered her femur and was forced to be on the sidelines that winter. However, she first made sure that her “Get knocked down, get right back up” mentality would steer her recovery.

“I was in the hospital for six days when I broke my femur, but two weeks after I went to the sign-up shed with crutches, almost in a wheelchair, and I raced the race just to finish out the points.”