G!World is providing young girls, especially girls of color, with necessary safe spaces to learn about themselves. 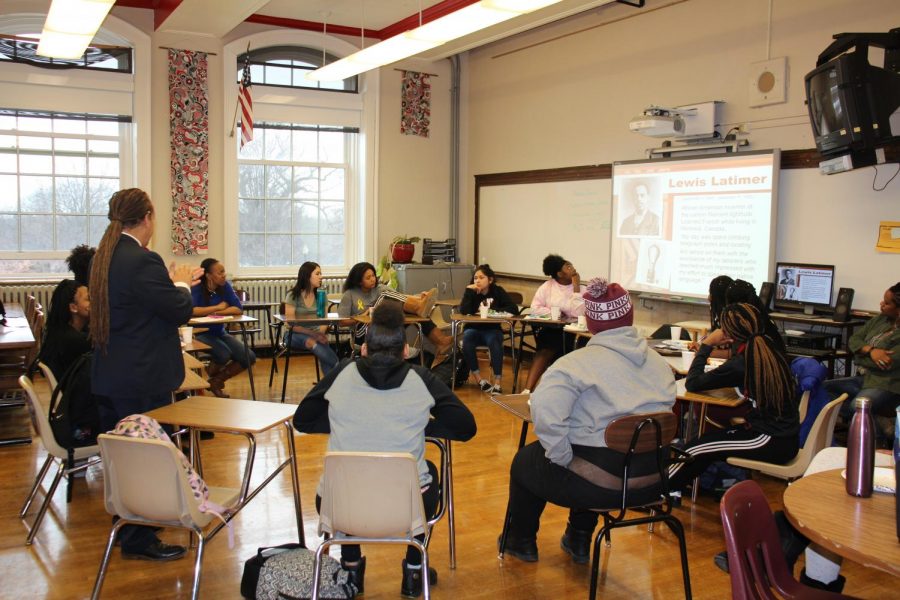 G!World is not so much a club as it is a sisterhood. Skilled coordinators, facilitators, and creators can be found mentoring, advising, and sharing their experiences with young women.

“I’ve always wanted to help girls who look like me, girls and boys [of] any population that is marginalized like African-American women,” said Chasity Dillard, one of the facilitators for G!World. “Just being able to be a positive role model to any female population is something I’ve always wanted to do. With the neighborhood center I get to help families and children in low income neighborhood to succeed in life.”

G!World is a program that provides young women of color with a place to voice their stories and the challenges that they face regularly. It was created five years ago by founders LaTasha Deloach and Raquisha Harington, both of whom are employees of the ICCSD. They were asked by City High to aid in issues concerning African-American girls. The program was later integrated at South East to help girls with the transition from grades eight to nine. The G!World program has grown from North Central Junior High to West High and is now offered in all ICCSD schools above the junior high level.

“Working with girls has inspired me. I did my first girls’ group in North Central about 10 years ago and I still am in contact with those girls. They are grown, they have children, and they are working. Every group of girls I work with I still talk with them. G!World is a huge part of my life now that I have a daughter, so it is an important part of my life on how I give back to the community and make sure the girls feel strong and empowered. That they feel like the world is theirs and that is why the logo has their foot on the world so they know ‘I can want it and get it,’” said LaTasha Deloach.

G!World’s mission is to help uplift and empower young women. The program is a space where girls can feel safe and express themselves. Members get the opportunity to talk about things that they may not normally feel comfortable talking about and are encouraged to dream bigger than they would on their own.

“We get to create our own space for ourself. We get to find our voices that sometimes are ignored in classrooms, when we feel invisible, or when people are only valuing us by looking at our bodies. You get to just be you. No one is judging you, it is a judgment-free zone,” Deloach said.

“[G!World] is important to me because it has been a place that I can go to and just be myself. I get to hang out with the different people in the group and learn things that I haven’t before. Also, have the opportunity to meet and work with great people in the community,” said Tiakra Winfield ‘18, the president for G-World.

G!World is also a place for young women to talk about issues that are occurring in their life or around them. They also discuss the issues that they can not control or issues that just frustrates them.

“[The Girls]  get to feel protected and empowered by other women that can relate to them. Basically, G!World is a group for girls who are self-identified minorities who just want to feel part of something special in a group that is going to support and propel them forward in life,” said  Dillard.

Empowering young through exposure of  representation is key aspect of G!World. The facilitators and coordinators work hard  in order to show young women people who look like them in powerful positions which empower girls to think that they can be in that position as well.

“Representation is so important for anybody. [The program] is important because it allows young women to see themselves in places they might not normally. When [the girls] see someone that looks like that in that high position it makes them think like they can do it too. That’s why representation is so important, it opens their mind and scope of possibilities,” said Basya Miller, one of the coordinator and facilitators.

To provide young women with positive reflections and representations of themselves, the group organizes events such as “My Beautiful Self,” an annual event where girls go to attend different activities, workshops and  listen to different speaker.

“My Beautiful Self” has helped me to learn about Black people in history that have actually changed the world, that are not taught to us in school. One time they brought in a speaker who was an entrepreneur. She talked about her story and struggle and I could relate to it,” said Everline Bwayo ‘20, a member of G!World.

Another important part of G!World to young women of color in the Iowa City Community School District is that it allows girls to feel like a part of their school. Deloach and Harrington can confirm data collected on the ICCSD: many girls of color do not participate in extracurricular activities.

“We wanted to create a place specifically for them so they can feel connected to the school, or having something at their school that is for them. We created it because it didn’t exist before. It was something that was really important to me when I was here as a high school student,” said Deloach.

G!World has influenced and impacted women in several important ways. They are often reminded that they can pursue and achieve their educational goals. Last year, the program had its first group of graduating seniors, who have now started their first year of college.

“[Before their graduation], there were some young ladies who didn’t think they would make it, and college wasn’t even on their minds. Being a part of G!world helped to install in them a desire to want more. Seeing and knowing that G!World had such an intricate part in that development for them has had such a positive impact on us, and the young ladies that have come through this program.” said Basya Miller.

Another way in which they instill the importance of education on the girls is by taking college visits. During the summer of 2017, G!World took a trip to the historically black college, Harris Stowe State University in St. Louis.

“We had some girls who were not thinking about college or even thinking past high school. When we were at that campus we saw well-dressed young men and young women. They were walking around with ties and heels and [most importantly], they were there to got their education,” Miller said. “[That trip] showed that there was a different side of life for people of color than what they might be used to seeing. So just having that exposure in knowing that there is something greater out there helps pull them further into their future and success.”

Although G!World has played a crucial role for young girls, it is just as important to facilitators, such as Chasity Dillard and Basya Miller, who feel that this group fills a space that was lacking when they were younger. Neither one of them ever had a program made available to them whose purpose was to empower young women of color.

“As a child growing up in Iowa from the Davenport/Quad Cities area, I know how it can feel to be a minority. [Being] a black girl in Iowa, I know how important it is to have other women who look like you, or women of color encouraging you to be a better person,” Dillard said.

Facilitators and coordinators of the group say that they have been impacted by the young women that make the program, as they are able to witness firsthand the strength of each girl and how she works hard to achieve her goals.

“Many people think that you are helping the kids, but they are the ones helping you help you because you can see how resilient young women are and how much they want to succeed in life,” Dillards said. “I have learned a lot of the struggles that some girl has gone through that I didn’t have to go through as a child. I’ve just learned to not take my own life for granted… It has just impacted me by wanting to be the best person I can be in order to help young women of color.”