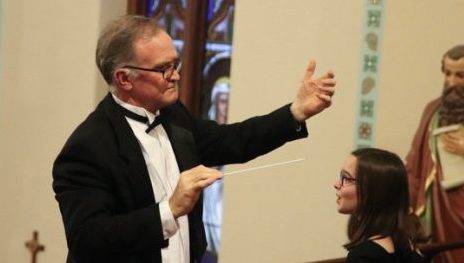 The music began in the back of the church, filling St. Mary’s Cathedral with the sound of students’ voices. ‘Ubi Caritas’ rang as the Advanced Women’s Choir took to the stage.

“It was just stunningly beautiful, all acapella, no instruments or anything,” choir director Greg Grove said. “It was probably my favorite moment of the concert.”

The City High choirs held their annual Cathedral Concert at Saint Mary’s on April 11. The music performed is sacred, which is unlike the others throughout the year, that focuses on secular and sacred music alike. This concert, which has been a City High tradition since the ‘80s, holds a special place with Grove.

“As a director, it’s a great concert because it gives us an opportunity to dig into some music from other eras that we may or may not be able to do otherwise,” he said. “It’s a chance to sing historical music in a somewhat authentic setting.”

This year marked the fourth and final year that Audrey Friestad ‘18 performed in the Cathedral Concert. Like Grove, Friestad, who is a member of both the Concert Choir and the Select Women’s Ensemble, enjoys this concert in particular.

“I’ve always loved the Cathedral Concert, because we get to sing in such a beautiful place. However, I wish that we were able to go to other locations and sing music that is sacred in other cultures too,” Friestad said. “I think it would be really enriching if we spent time on multiple religions each year. I feel like right now we’re either doing Christian music or secular music.”

For the Cathedral Concert, the choirs perform specifically traditional Christian music. Each of the groups of performed songs either from the choir loft or from the front of the church, allowing for the audience to enjoy all around sound.

Although Grove chose ‘Ubi Caritas’ as his favorite piece, his praise went far beyond it.

“I thought the concert was excellent from beginning to end,” Grove said. “I think that Dr. Thompson and I would both agree that they gave their best performance.”