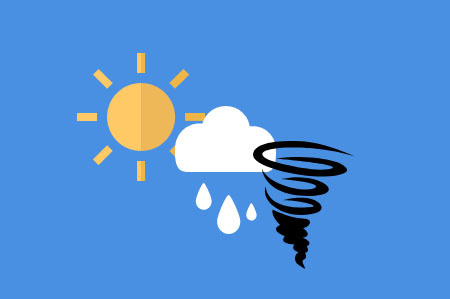 This is the 10-day weather forecast for Iowa City, Iowa.

Day two: Should be mostly sunny with chance of clouds forming in the evening. Highs around 42 with lows around 23.

Day four: 100% chance of thunderstorms throughout the day. Possible chance of flash flooding. Lows in upper 40s with high of 61.

Day five: Scattered thunderstorms throughout the day, with strong winds moving E. Likely chance of tornado, so be alert. Low of 45 and highs in the upper 60s.

Day seven:  Expect lows below zero, reaching -24 with windchill. Highs around 10. There is a 90% chance of heavy snowfall in the evening that may continue throughout the night. Snow between 12-34 inches.

Day eight: Low of 56 and high of 72. 125% chance of an earthquake. Iowa is not even on a tectonic plate, but anything is possible.

Day nine: 102.435% chance of hurricane. Though hurricanes are typically localized to coastal areas, it is happening. Currently accepting name suggestions for said hurricane.

Day ten: Partly cloudy, with slight winds. 50% chance of light precipitation in the morning. Lows in the mid 30s with high of 48.