The Little Hawk • May 11, 2018 • https://www.thelittlehawk.com/44261/uncategorized/teacher-appreciation-week-thos-trefz/ 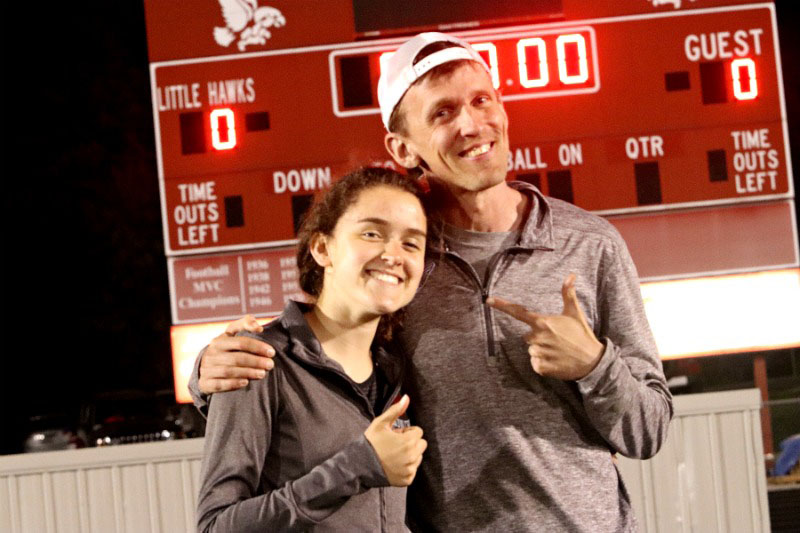 Squirrels? No, butterflies. Certainly a river or waterfall. There was probably a songbird and descriptions of dewy morning grass included as well, but they’ve escaped my memory along with the rest of it. Whatever the details of this excessively elaborate poem were, I will never remember them because it was recited to me during the last lap of an exhausting threshold workout by a full-lunged, relaxed Thos Trefz, running beside me and the Distance Crew like it was nothing.

Along with teaching us how to train to threshold-poem levels of aerobic ability, how to push ourselves beyond what we perceive as our “limit”, and the importance of resting and “adapting”, Thos has taught us how to find clear mental spaces in times of stress (i.e. 400m into a race that is not going as planned), how to always do the little things with absolute precision, and how to detect sarcasm when both the words being said and the tone being used would lead one to assume complete seriousness.

We have also been taught from those “teachable moments” that typically end with a sassy remark. In the cross country season of 2015, when varsity was just going on a run instead of racing in Sterling, IL, some boys from another school started calling after the girls, asking them their PRs in a cat-calling manner. The girls didn’t say anything because Thos told them to not respond, but he then turned around at the last moment and came back with, “What’s YOUR PR, big boy?!” Although I wasn’t on the team at the time, it’s one of Amelia Morrow’s favorite stories, so I have heard it more than enough to know that this experience taught all of them how to respond to cat-calling: by simply turning it on its head and to send the cat-callers away with confusion, and your group away with a story to tell.

We’ve learned numerous things just by being expected to do the basic functions of being an athlete and falling short, too. I have learned the hard way that outdoor stairs in the winter are not to be trusted and it’s better to play it safe when considering a concussion. Some people who will remain anonymous learned that snowballs are best kept on the ground, far away from impulsive teens’ hands. During these sometimes excruciating processes of learning, Thos always remains calm, doesn’t dwell on the fact that it happened, and just points us in the direction of how we can move forward and avoid these mistakes in the future.

The current track season for our Distance Crew has not gone exactly as we expected with ⅔ of us going in and out of the cross training room, but Thos has made it clear that he’s not disappointed in us. He just wants us to be the best people as well as athletes we can be at any given time. Starting off most practices with an inspirational quote from a strong, powerful woman and themed days like Teammate Tuesday and Thankful Thursday keep us growing as people and remind us to never get too wrapped up in our own times and problems, and that making the team and community better is what really matters.