The Little Hawk • May 11, 2018 • https://www.thelittlehawk.com/44291/uncategorized/teacher-appreciation-week-sra-silva/ 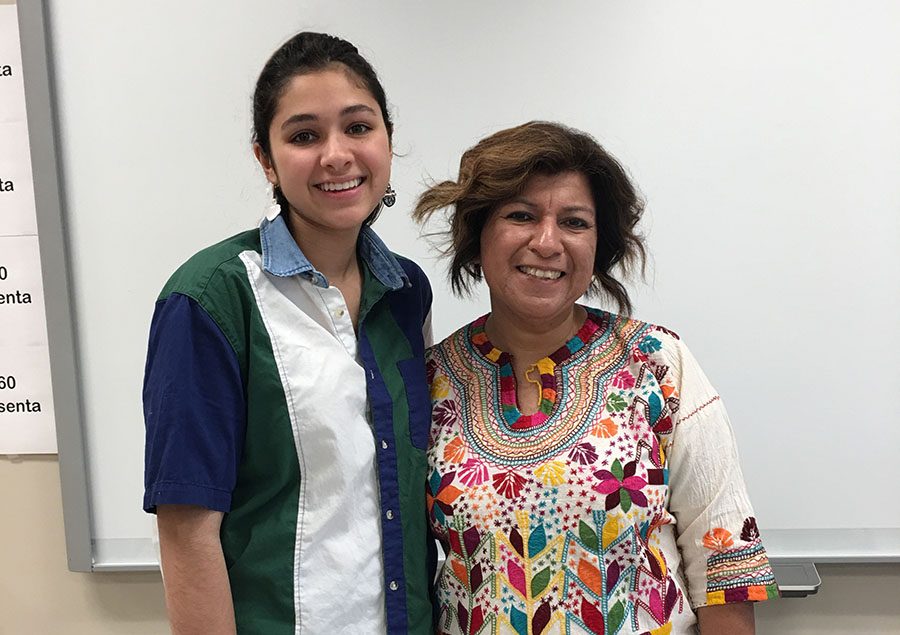 World language programs have always been some of my favorite classes. I’m enamored with language and words, and I’m strongly considering a major in linguistics, rhetoric, or comparative literature. But Sra. Dolores Silva’s class is an entirely new experience when it comes to language. Sra. Silva weaves stories about her life into the class, painting pictures for students of her experiences with biculturality and bilinguality and allowing them to gain insight into the lives of the people whose language we learn.

Sra. Silva grew up in Texas on the border with Mexico, and frequently visited Mexico as a child.

“My mom was…an undocumented immigrant for a while, and she was married to a citizen so she got her residency and became later a U.S. citizen,” Silva said. “I think her story, her experience, and my experience traveling to Mexico with her from a very young age gave me an insight on not only being bilingual but learning the languages and being able to use different approaches to teaching.”

Silva said that often she felt as though she didn’t belong in either the United States or Mexico when she traveled back and forth as a child.

“Culture, to me, was really painful growing up because it was like I was never enough, no matter what side of the border I was on, I was never enough. On one side, I was never light enough, I was never perfect enough, and on the other side…my words were not the right words,” Silva said. “I was always picked on on both sides. The two gaps that create the difference and the hostility in the environment, that was what I ended up dealing with in Mexico, but in the US it was the same thing. My Spanish was so Anglicized to them…and then when I spoke Spanish in the US they were like, ‘Oh, my, here she comes, she’s from Mexico today,’ because my accent was so thick from being in Mexico, and I was like, ‘I can never get this right.’”

During Silva’s childhood, she thought that “science was going to save [her] from poverty,” she said. “So I tried my best. I took all the calculus, chemistry courses I could, and physics, and…by our senior year it was three girls and the rest were guys in our science classes.”

Silva said that her bilinguality meant that she used math and science to help her through school.

“Although I don’t sound like it, my English skills as far as reading are not as excellent as my Spanish…and so I used math a lot, but when I’m looking at teaching I feel more confident in being able to bring kids along in a skill that has reading, listening, speaking than teaching a dry content and being able to manipulate that. I think that’s more dry for me than being able to go at a whole skill of language. And I feel at home, using Spanish and teaching Spanish and sharing my stories.”

The journey toward studying Spanish began in college, Silva said, when she found that she was fascinated by Spanish literature and reading and writing the language.

“When I got to university, I realized, one, I don’t think I was really prepared, and two, I realized that I didn’t have to do science to survive, and three, I really fell in love with reading in Spanish and telling stories and writing my own stories,” Silva said. “I realized I had found myself and I had discovered literature in Spanish.”

Silva became interested in teaching when she visited Costa Rica in college and worked with the children of her professors.

“What I discovered was that I enjoyed the classroom and helping kids create things,” Silva said. “When I came back to the States I got my teaching license and taught back home as a way to give back to my community…then I came out to Iowa.”

One of the reasons that Sra. Silva is a wonderful teacher is that she not only teaches students about Spanish grammar, but also about the many types of people who engendered the language–and the threats facing some of those people.
“I feel that [teaching social-justice aspects is] my responsibility–not as a minority, but as an indigenous person that has gone through the system and has accessed opportunities through the system and I think that it’s important that others also see that adventure, that journey, that voyage can be taken and used to positives,” Silva said. “I think that in sharing those things people maybe will have better experiences with their own identities. In college, when I did take Spanish, I was never good enough or perfect enough because of the color of my skin or because of my accent…in those grammar courses, I was always getting knocked down, and so when I’m in the classroom, the first thing I want is for everyone to feel like it’s okay to make mistakes, it’s okay to be different, it’s okay. As long as we can understand what you’re saying, it doesn’t really matter. So I think I took those experiences to heart and that’s also why I do make it a point for everyone to feel welcomed and appreciated for whatever they contribute, because I think that’s super important.”

“[My stories] all give you an explanation of why I’m here and why do I teach Spanish and why do I talk about social justice, and it’s really about improving our experiences, especially for our children. I have my son right now, he’s like, ‘I don’t know that I like the way I look, because I’m different, my color,’ and things like that,” Silva said. “I think it’s super important for those children, my kids too…and for anyone who feels different to understand that there is a place and even though history doesn’t want to acknowledge certain aspects that are contributed by our underrepresented groups that we do have a place and it’s not all about being marginalized…and we can overcome different obstacles. Sharing my stories is hopefully giving people an opportunity to seek within and understand that even if it’s not written, our faces are here to show that we are part of history.”

Sra. Silva said that becoming a Spanish teacher also helped her to figure out what her heritage meant to her and how she could understand her niche in life.

“Growing up, it was more of not getting it right for anyone, and when I was in college and was able to see so many variations of the culture and the language and grow an appreciation for who I was and what I was exposed to as far as the language and the culture–I think that that kind of made it okay for me to continue my learning process…I evolved from the ‘Oh my God, I’m not accepted anywhere’ to ‘I just found my place in this world.’”