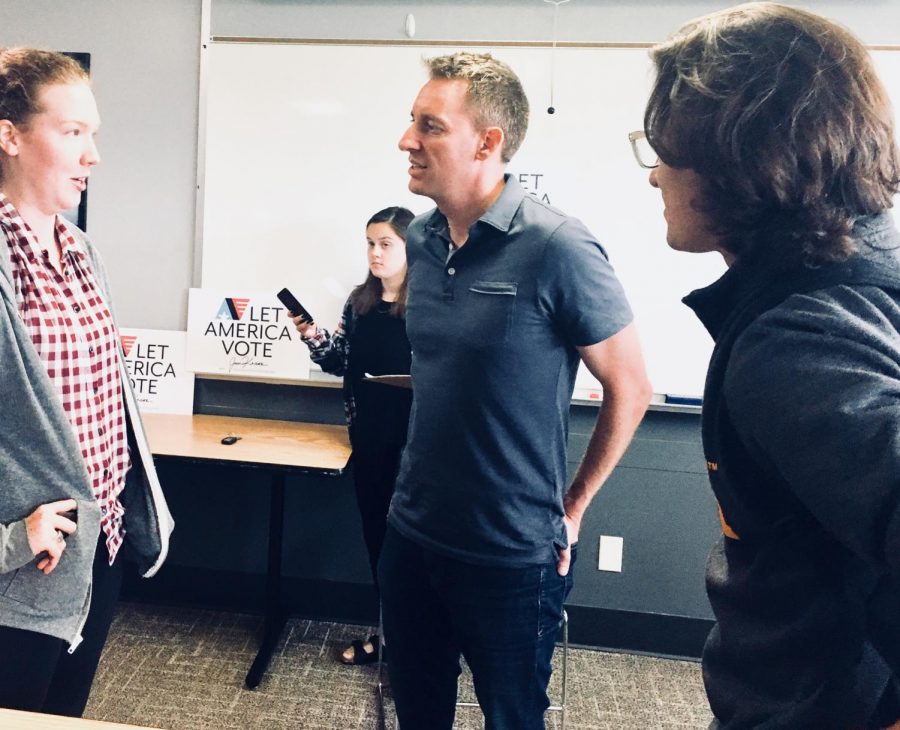 Let America Vote founder Jason Kander, alongside officials and interns with the program, visited the Iowa Memorial Union on August 24 to talk to and field questions from students.

“Our mission is to create political consequences for voter suppression,” Kander told students. “If you’re going to do anything in politics right now in this state, I think this is one of the best things, if not the best thing, you can do for you and also for making a difference.”

Let America Vote formed to fight back against what Deputy Field Organizer Alex Salisbury, an intern with Let America Vote, called “an epidemic of Republicans trying to suppress the votes of regular, everyday, hardworking Americans.”

“The voter suppression playbook that the Republicans run nationally has three steps to it,” Kander said. “Step one is they undermine faith in American democracy. They do things like saying there were 3 to 5 million illegal voters in the 2016 election when there clearly were not. Step two is they create obstacles to voting, and then step three is they create obstacles to the obstacles. For example, here [in Iowa] they put in a law saying you have to have a certain kind of identification in order to vote. They’ve said that they’re going to shorten the time you actually have to vote. They’re closing over 80 DMVs in Texas, so that’s an obstacle to the obstacle: ‘You have to have this kind of ID in order to vote; by the way, we’re going to make it a whole lot harder to get that kind of ID.’”

Kander views the issue of voter suppression as a campaign strategy, allowing for selective access to voting rights and control of elections by elected officials.

“Whether it is…college students, or working people, low-income folks, communities of color, disabled folks, women, older Americans–all these groups have a bad habit, in their mind, of not voting Republican very often,” Kander said. “So as a result, rather than reach out to them and try and convince them to vote for them, or rather than change their policies to try and accommodate what it is they want, they’ve decided to try and eliminate from democracy those groups.”

The strategy Let America Vote takes is to campaign against elected officials who perpetuate voter suppression, creating a disincentive to implement policies that take away voting rights.

“In Virginia, in 2017, we knocked 194,100 doors, made about 30,000 phone calls…and we were able to help flip seven seats in their legislature from red to blue. That helped us prove the business model, and then we said, ‘Okay, let’s pick out five states for 2018, where there’s been recent voter suppression activity, where democracy’s under attack, let’s go over there, let’s create a political consequence by winning elections.’ Iowa was one of those states,” Kander said. “[Deirdre DeJear] is running a great campaign for secretary of state and we’re helping her. We’re also helping a bunch of state legislative races, the state auditor’s race, the governor’s race.”

Kander also encouraged students present to take up internships with Let America Vote, which would allow them to experience firsthand the inner workings of campaigning and achieving voting rights.

“The best part is that you’re not just going to learn about how to do fieldwork. You’re going to learn about the entire 360 degrees of campaigning. Zack [Davis, Let America Vote Iowa state director]  and the rest of staff have done a great job creating resources that allow you to understand how campaigns are financed, how to raise money, how to do communications, how to do strategy and messaging,” Kander said. “That’s why we’ve had so many of our people come out of the program and either start working with us or working with other campaigns across the country, because they’re really prepared to do it.”

After Kander finished speaking, students asked questions on a variety of subjects, including canvassing, 2020 presidential candidates, and the best ways to work with a community politically. Davis discussed the logistics of campaigning, including giving advice on how to “connect with people on a human level” when canvassing for candidates.

“My wife and I door-knock at night in our neighborhood and I typically take my daughters out. I don’t know what my House candidate’s script is, or really what his lit[erature] says,” Davis said. “I’m just like, ‘Here’s why I’m here: I have two little girls, and I feel like the state of Iowa and the policies being put forth right now are letting them know that they don’t value them and their opinions, and so I would like you to support Kenan Judge,’ and my wife goes out and knocks for Kenan Judge and does the exact same thing, but she says, ‘I’m a teacher, I teach three sections of Algebra II that have 33 kids in them each. I think my class sizes are a little too big and education isn’t really funded.’ We try to cast as big a net as possible and just go talk to Iowans and have Iowa issues.”

An overarching theme in Let America Vote’s rhetoric is the necessity of voting rights and the cementing of the status of voting rights as civil rights that are essential for all people to have in order for democracy to function.

“People talk about the civil rights movement like it’s just a piece of our history, something you read in textbooks,” Kander told the audience as the event drew to a close. “The civil rights movement never ended. People, when they were marching across the bridge in Selma, facing down dogs and batons and hoses, they were doing it for the right to register to vote. It’s a shame, it is sad, it is too bad that it never ended, but if there is any small, tiny silver lining to that, it is that we all get to be a part of it.”