Recap: Battle for the Boot 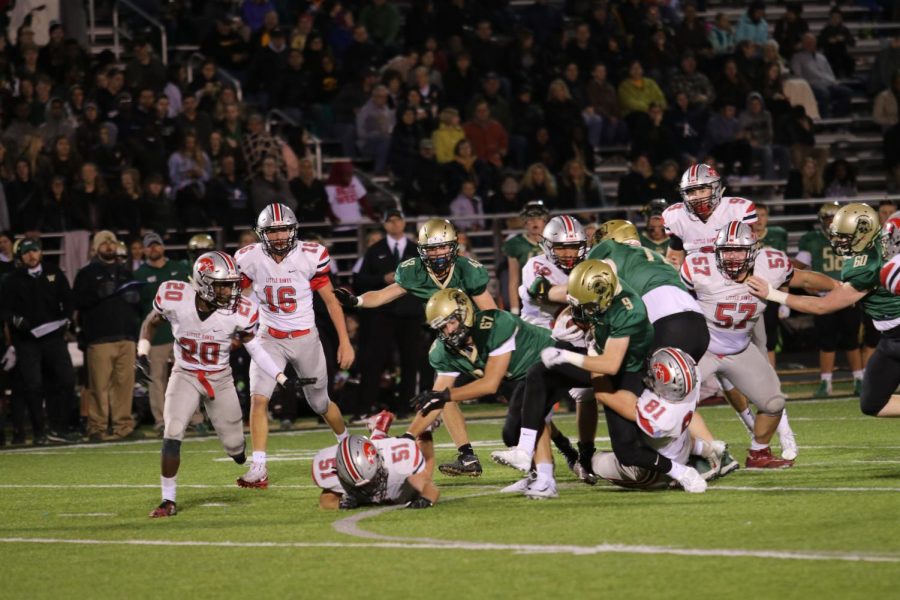 For the first time in well over a decade, West High has beaten City in back to back football games. The fifth ranked Trojans were heavily favored over the 2-7 Little Hawks, but that didn’t make the dominating 54-13 loss any easier to swallow.

“It was tough,” said Garrett Rosenow, who played offensive and defensive line for City High this season. “We were all looking forward to that game since the beginning of the season, so to go out like that is obviously hard.”

City started off strong. After stopping West on the first drive of the game, the Little Hawks marched down the field on the stingy Trojan defense for a touchdown that put them up 7-0. West High gave up one total yard of offense in their game against Linn-Mar earlier this season, but the Little Hawks drove down to the red zone in their first three possessions on Friday night.

However, it wouldn’t be enough. City failed to score on two of those red zone trips, and with five minutes left in the second half West extended the still-manageable 16 point deficit to a stifling 40 point lead at halftime on a series of big plays and turnovers.

After that the game was essentially over, as each team scored a touchdown late with multiple starters out of the game. Quincy Wells ’19 connected with tight end Evan Gundar ’19 on the final play of the game, giving the Little Hawks a glimmer of positivity in a game that otherwise had gone south.

Despite the outcome, Rosenow says the team was happy with their effort out of the gate and perseverance as the game went on.

“I’m still proud of the effort we showed,” said Rosenow, “and I think (our effort) says a lot about the quality people we had on our team this year.”

The question for Little Hawk fans is what comes next. This marks back to back years that City has gone 2-7 with multiple close losses, but there seems to be light at the end of the tunnel.

The freshman class appears strong, featuring one of City’s largest linemen groups in years, future playmakers Darren Richardson and Jamari Newson, and other key athletes such as Gable Mitchell.

City also returns Varsity quarterback Raph Hamilton, who was just a sophomore this season, and running back Tonka Hickman ‘20.

The sophomore team had success against West before ultimately coming up just short. City lead the Trojans by two scores in the second half, but a series of mistakes and questionable calls on the part of the officiating crew lead to a late victory for West. Still, the Little Hawks may well have more upside between the two squads, as City’s Sophomore team was largely made up by the talented Freshman class this season. Between City’s youth and the fact that West was heavily Senior laden this year, the East Side may still have reason to be optimistic in Boot games in the next few years.

“You can expect great football from us moving forward,” said Goodrich. “That’s a talented group of guys that I have the opportunity to play with, and we have great respect for each other.”

Goodrich says the Little Hawks can see more success at both levels next year, and that it will come down to the work they put in this offseason.

He’s right. City should return enough offensive playmakers next season to make good things happen, and brings back a solid Junior class on the line. Defense could be a different story, as City loses key Senior tacklers like Liam McComas, Max DePrenger, and Kyle Heffley.

Still, come what may, the fact remains that the West High Trojans won the Battle For The Boot in the 2018 football season, and they did so in dominating fashion. It’s a sobering loss for the Little Hawks, and one they will most likely use as motivation next season.