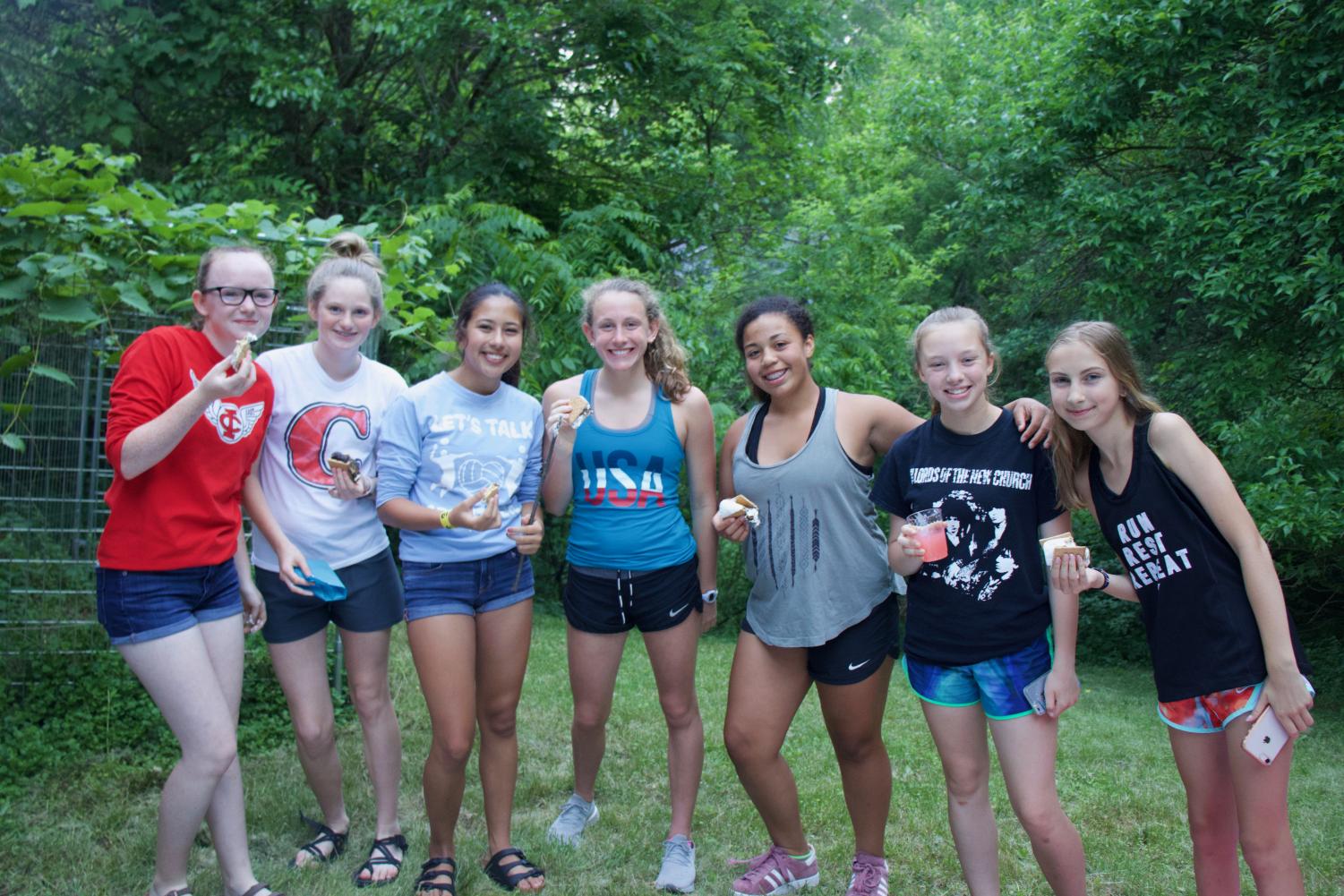 More Than a Team

Although seniors and freshmen at city are often separated, freshman and seniors on City’s girls cross-country team get to know each other quite well over the course of a season. Every year, the team has a “freshman wake-up” where returning members of the team surprise the freshman by waking them up in their room and taking them to do fun activities.
Averi Loria ‘22 was happy to get to know people outside of her freshman class during the wake-up.

“I didn’t know any of the seniors and now I know most of them and it makes the team atmosphere feel a lot friendlier,” Loria said. “This year we went to a dance party, a haunted house, and then we went out to breakfast.”

Beyond freshman wake-up, the team has a host of team bonding experiences. Mai Hoang ‘19 has been on the team for three years, and is fond of the team dinners held the night before a meet.
“I think my favorite [tradition] is probably team dinners. We go there after a workout, everyone is looking forward to the food, and everyone is nice and relaxed,” Hoang said.
Although the girls cross-country team is competitive, Hoang believes that the team prioritizes a feeling of family over winning.

“I feel like when you go in the mindset is family comes first, it’s not just about competitions or winning, obviously those are all on mind but I think everyone comes in with family being the top priority,” Hoang said.
Beyond just creating a fun environment, both Loria and Hoang believe that this family feeling can help them during races.

“Cross-country can be tough and knowing there is someone with you means you don’t feel like you’re out there alone and everyone is out there as a big group. You might be three minutes ahead or behind someone but everyone is there and waiting for you when you finish,” Hoang said.

As a senior, Hoang has seen many traditions evolve over time.

“I think I have grown to appreciate them more and see how special they really are. As a senior you get to see everything come full circle, and you get to see these freshmen coming and they get to start this new, and they have so many opportunities ahead of them,” Hoang said.

One unique thing about the girls cross-country team is that all of their team bonding events are run solely by the students.

“I love it because the traditions come from the girls and wanting to have that bond, so it doesn’t feel forced,” Hoang said.

In the water, the City High girls swimming team has a myriad of different team bonding activities. Team captain Maggie Cremers ‘19 has been swimming for nine years and all four of her years at City. One of the swim team’s biggest traditions is the annual Harry Potter-themed practice.

“The TriSwimmer tournament [The Harry Potter practice] is something we look forward to every year and we go all out. We split into houses and have competitions with Harry Potter trivia, relay races, and games. It’s a good break from the normal practice structure and refocuses us on working hard for our big meets at the end of the season,” Cremers said.

Along with the Harry Potter-themed practice, another one of her favorite traditions is the team sleepover.

“Our team sleepover is great because we still don’t even know everybody’s names at the start but in the morning we all know each other and made some really good memories. This year we had a City Swim-themed Kahoot! and a Mario Kart tournament,” Cremers said.

Cremers believes that there are several unique things about the team.

“I think we are a little different since we are a smaller group. It really gives us a chance to get to know everyone really well. That, combined with up to 10 practices a week, makes us a really close group of friends,” Cremers said.

Like the girls cross-country team, the swim team feels like the extra encouragement given from having a closer team helps them perform better in their sport.
“Bonding helps me do better. My teammates really push me and are super encouraging. It really motivates me and others,” Cremers said.

Another parallel between the two teams is that the girls swimmers also organize most of their team events.

“The coaches started our Harry Potter-themed practice my sophomore year, so they’re in charge of that, but the other stuff is organized by the team captains with help from the other upperclassmen,” said Cremers.

Girls swimming also has several other traditions. They have a breakfast together after stadium cleanup, have team dinners the night before all of our home meets at a team member’s house, and a fundraising car wash.