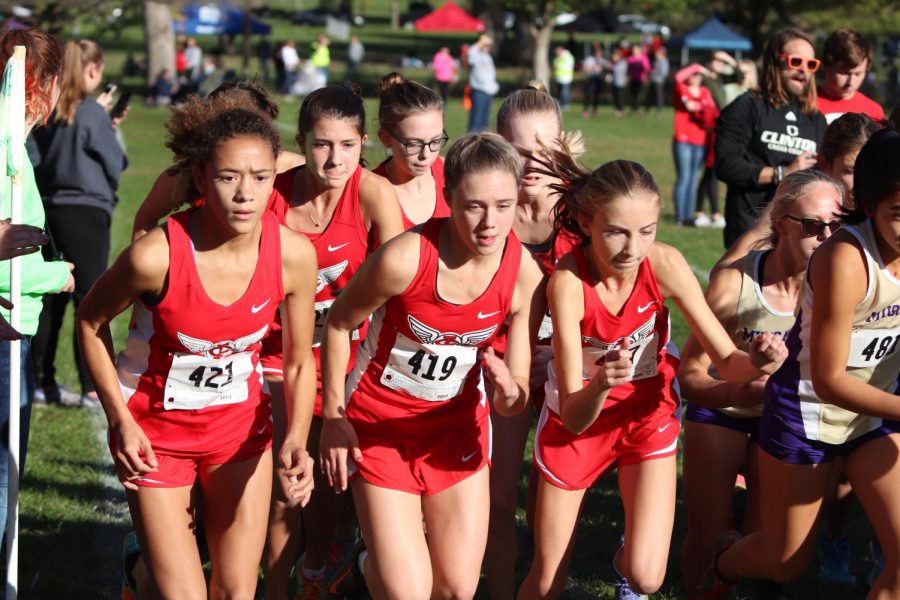 City High Girls XC team as they are starting their race.

After thirty years in a row of qualifying for state, the City High Girls Cross Country team broke their streak. They came in fifth at Divisionals, missing the qualifying third place by only three points.

“It teaches you that cross country is a very razor thin sport where a few thing here or there in a race, one girls passing you here, one girl passing you there, can make a big, big difference,” Coach Ryan Ahlers said.

“It’s sad, but everyone did their best,” Lilly Reynolds ‘21 said. “Some teams were just able to get out faster and keep that spot.”

The City High Boys Cross Country Team also did not qualify but they managed to beat Dubuque Senior, a team that beat them by a lot just a week before.

“We knew it was long shot coming into this race and we planned on giving it our all, trying to improve our times on the course and then just seeing how the cards fell,” Coach Salinas said.

The great conditions, with solid ground and nice weather, lead to many personal records and big improvements from almost everyone.

“We are extremely proud of them,” Coach Skay said. “The last month the staff’s goal was to have them come together more as a team and be more competitive. I think we have seen that in the last couple races. They did exactly what we asked of them and they competed thoroughly and gave it their best shot.”

While their teams did not qualify, both Yasar Hassan ‘19 and Rowan Boulter ‘22 qualified for state individually. Boulter getting fifth and Hassan fourteenth in their separate divisions.

“I am so excited for state,” Boulter said. “This is what I have wanted all season. It’s just that I am also very nervous and a little sad about not being able to qualify with my whole team. I could not have done any of this, the whole season, without them.”

Similarly, Hassan’s teammates were there for him while he was running.

“It was definitely my hardest race in terms of pushing myself. The team really kept me going,” Hassan said. “We were in there for the first two miles of the race.That helped me a lot mentally but in the third mile I knew that I had to start bridging out from the pack.”

One of his teammates, Charlie Maxwell ‘19 had been hoping to set a personal record. He did not do this but still had a positive outlook on the race.

“Not going to state is a little disappointing,” Maxwell said. “I wanted to go finish my season off well but I am really happy with what I have done these past years. It was my last race after 6 years [of cross country].”

Overall, the teams raced hard and even though for some of the runners their results were not what they hoped for, their coaches are still proud of their accomplishments.

“They are part of really tough athletes from so many teams, and this sport on any given day produces results that don’t add up with what you want. But the effort they gave should absolutely match the pride they have in their hearts,” said Coach Lynn Ahlers.