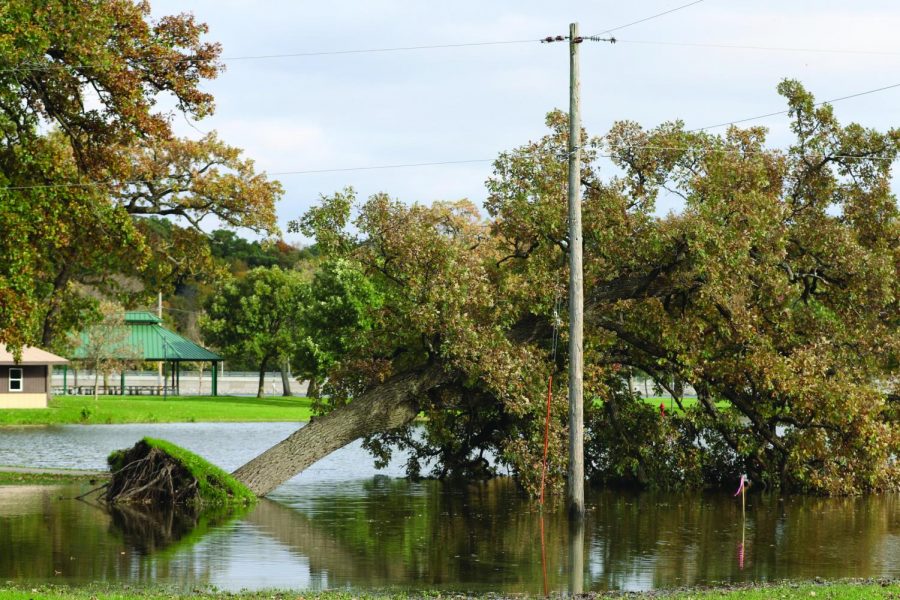 An uprooted tree in City Park

Rain has dampened basements, trails and streets in Iowa City all of this Fall. Just as the water has risen, so have people’s frustrations. Beatrice Kearns ‘19 lives in a house with a creek running under it, so she often experiences flooding in her basement. Due to the recent heavy rain, her basement is currently flooded, and she estimates this is the fourth or fifth time it has happened.

“My basement floods all the time,” Kearns said. “Two weeks ago we had to rip all the carpet out of our basement and there’s still fans drying the floor and it smells really bad in my entire house.”

Kearns recalls that the city made efforts to fix the flooding on her street a few years ago, but it was unsuccessful.

“[The city] put a different drainage system in, but a couple of our other neighbors complained because there was so much water draining into the street that there was algae growing so we had to stop doing that,” Kearns said.

Without a proper drainage system, all the houses on Kearns’ side of her street flood frequently.

Iowa communities have spent about $18 billion on floods since 1988, according to a recent University of Iowa study. In 2008, Iowa City and surrounding areas experienced a flood with levels that had not been seen for over 20 years. Since then, the city of Iowa City has made efforts to prevent a recurrence, such as raising Dubuque Street.

Zack Greazel ‘19 lives in a flood plain, and in 2008 had to evacuate his house due to flooding.

“We were asked to evacuate and we did for a little while, but then we got annoyed with having to live with our grandparents, so we had to sneak around,” Greazel said. “We parked our car at the trailer court which is nearby and had to have one of our neighbors take their golf cart to our house and we just lived there, not illegally, but nobody wanted us there pretty much the whole time it was flooded.”

Flooding has been a part of Greazel’s life since first grade when he moved into his current house.

“With where I live every single time the water level gets too high the roads get closed and I have to take different ways,” Greazel said.

But, Greazel says that this year he is not being affected by the flooding as much due to the raising of Dubuque Street.

“It’s fine for me because they raised dubuque street but because the people who live on Linder Road, which is nearby, refuse to raise the road because that would mean their houses get destroyed so we still have parts of our road where the city has to come in and bring gravel when [the water] gets too high,” Greazel said.

Although raising Dubuque Street has drastically decreased the flooding in Iowa City, it still causes problems in the area. Greazel believes that the city still has work to do in City Park, a public park that is next to the river opposite Dubuque Street.

“I think they did the right thing by raising Dubuque and making a new bridge and stuff but you can see that City Park is completely destroyed every time it floods and I think that if they care enough about city park they should definitely try to put up a wall or something over there that will make it stop flooding every time,” Greazel said.

Flooding does not only affect people’s home lives, it also affects sports. Cross country coach, Ryan Ahlers, has been frustrated by the amount of meets that have been cancelled this season due to rain. The first three meets of the season were cancelled, in addition to more throughout.

“I’ve been a part of cross country since I was in ninth grade, so 22 years, pretty much every year, because as soon as I graduated college I started coaching and I’ve never seen a Fall this wet and this stormy,” Ahlers said.

The cross country team’s practices have also been affected by the floods, as some of their routes have been inaccessible, for example Napoleon, near Terry Trueblood Park.

“Two weeks ago we were going to do Napoleon…and we got all the way down to where the trail goes underneath the bridge and [water] was almost up to the bottom of the bridge,” Ahlers said. “It probably would’ve been mid-thigh deep.”

Thankfully, the team had an alternative route planned for the day because they suspected this would be the case.

City High students, especially athletes, have become very annoyed with the fluctuating weather this fall. Kearns hopes that it dries up soon so that she can have her basement back and not have to worry about being wet all the time.

“Everything I own is moist,” Kearns said.