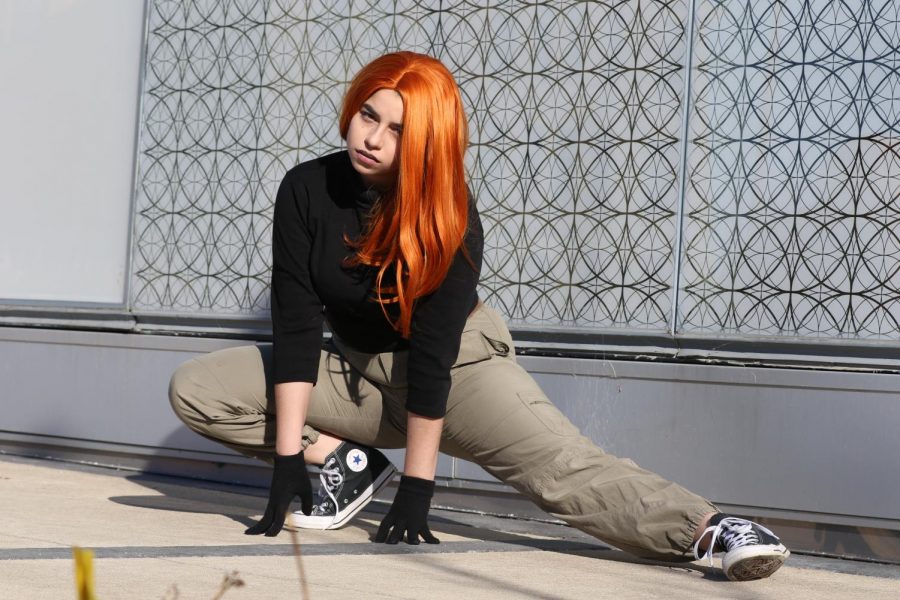 The difference between dressing up in a costume on Halloween and dressing up on any other day is that to most the latter seems “odd,” but for Rylee Zuniga ‘19, Josie Frisina ‘19, and a whole community of cosplayers, that difference is everything.

Cosplay, or “costume play,” is usually defined as the act of dressing up as a typically fictional character from any outlet of media. While the hobby has roots in drag and theatre performances, it’s a relatively new occurrence, having gained international attention only in the last few decades.

“It has origins in separate aspects of costuming but it came about in different places at different times and soon became a globalized phenomenon,” Zuniga said. “It started all over but then reached across to exchange different ideas and techniques.”

Frisina avidly watched anime with her father when she was younger, and always imagined dressing up as one of the characters for Halloween, unaware of the existence of an actual community dedicated to this. But after meeting Zuniga in junior high, the two decided to go to AnimeIowa, the biggest anime convention in the state.

“My first cosplay was god-awful because I couldn’t get my wig in time, I got back and actually cried, like real tears as we were driving home,” Frisina said. “Halfway through the convention I took off my wig and skirt and was just walking around in a white button down and shorts. I have a photo of that and how bizarre I looked. It was an experience.”

Since then, Frisina’s cosplaying has reached another level. Now she spends weeks planning her outfit on Cosplanner, an app that allows you to set budget levels, deadlines, and keep track of which parts you’ve finished sewing, because for a lot of cosplayers, a homemade outfit has even more value than an outfit they’ve bought.

Many people see cosplay as a fetishized hobby, something Zuniga and Frisina actively work against.

“It’s a lot more complex than that and it means different things to different people,” Zuniga said. “It’s not all about a sexualized character or sexy female Pikachu, it can mean things people who put time and effort into becoming a character who they love.”

While the simple act of dressing up like a favorite character can seem straightforward, there are countless issues people encounter when attempting to interpret what a character would wear. Much of this worry actually stems from any potential backlash received from fellow cosplayers, making negativity something that can come from inside the cosplay community as well as from without.

“As time has gone on, we’ve seen judgement around people’s costumes,” Frisina said. “And I don’t know if that’s because we are more evolved in the cosplay community, or are going to more conventions, but we’ve seen more people with snide eyes looking at people.”

The simple act of watching a show in either the original language, the show subtitled in English, or completely dubbed has cosplayers divided over how committed a person is to their character. Additionally, the amount of time a person has committed to a show makes some look down on them.

“It’s either, ‘You aren’t appreciating my favorite characters so therefore you’re a fake fan and I don’t like you,’ but it’s also not just for mega fans anymore,” Zuniga said. “There’s a lot of opposing views from every different angle; people saying, ‘You’re not enough of this,’ or, ‘You’re too much of this.’ At some point just shrug, if you want to do it just do it. You don’t have to prove yourself to anyone.”

Yet even after a cosplay has received the support of others at a convention, sometimes this enthusiasm can go too far.

“Cosplay is not consent,” Frisina said. “Do not be weird, do not be creepy, some people are out here touching parts of your body you don’t want to be touched and doing weird poses. They will assume that they are allowed to do this because you are in this costume and they want to live out the photo they are trying to take.”

This harassment is worsened when a cosplayer is wearing an outfit that could be viewed as provocative.

“That’s another part of the cosplay community people tend to hone in on and I think for a very good reason,” Zuniga said. “I went as Archymnight Catwoman to AnimeIowa last year but one of the things I had to do to psych myself up for it was that people were going to treat me differently or treat me poorly just because of the way that I was dressed. People shouldn’t have to go through that; it shouldn’t have to be an expectation that you will be heckled just because you look a certain way.”

Frisina has had similar experiences.

“I’ve been working on a bombshell Harley Quinn costume for a while, and part of the reason it’s been taking me so long is that I know if I were to wear it to a convention something might happen,” Frisina said. “I am one of the tougher people who will curse out anyone who’d even speak to me like that. But it’s concerning because I usually go to these conventions with my dad and I don’t want to be walking around and have someone make an obscene gesture while I’m with him.”

“I wouldn’t say those people are the majority of those who attend conventions, but there are just enough of them to where it’s always in the back of your mind to be street smart,” Zuniga said. “It feels bad, because then why are you even making the effort in the first place to celebrate a character that you love to just feel disrespected by people who feel like they can take advantage of you?”

Characters don’t just have to be cosplayed from an anime, though. Any movie or TV show is fair game, and even real people from the music industry or YouTube are subject to representation. But the act of choosing your character often comes down to one simple factor: the convention.

Cosplay conventions can be as small as a few hundred, or draw from as large an area as the entire Midwest. Tickets range from $60-$80, and that’s just to get in the door. Registrations are often made months in advance, hotels near the convention center are soon completely booked, and companies book space on the convention floor, vying to sell their products to eager fans. This is where cosplayers go to showcase their costumes to the rest of the community.

Before starting work on her actual costume for the event, Zuniga says she chooses her character after doing some very specific research on the convention. Cosplayers often spend a portion of time doing photoshoots at the event, so understanding backdrops and potential scenery is key in figuring out which beloved character would fit best.

“Izzy Piro from Homestuck was the first cosplay where I really went all in,” Zuniga said. “I got my grandma to come over and draft out a pattern. I bought the bodysuit but then made the vest and a weird long loincloth skirt with a slit up both sides and I painted myself gray.”

But Zuniga doesn’t just wear one costume to a convention; in fact, she brings an average of three. Some even go to the extreme of three outfits a day for all three days.

“Some people are really out here doing that crazy stuff,” Zuniga said. “I love myself, so one a day is plenty.”

But according to Frisina, it actually comes down to cost.

“The hotel rooms by the convention usually cost so much money that I am unable to get a hotel room in the actual convention place so I’d have to carry all my stuff on my back,” Frisina said. “If I were to change it I would have to go the restroom and do it there.”

And for the most part the complexity of these costumes does not allow for a quick bathroom change. In fact, between hotels, registration, food, transportation, and the simple cost of buying the materials leads many to ask the question, Why is cosplay worth it?

“It is a very valid question to be asking. I ask myself that a lot,” Zuniga said. “It’s just a really rewarding experience to be around a community of other people who share the same interests as you. At first I was in denial about this, but I think it’s really about escapism, from the world where you go to school and do your homework and come home. It’s more exciting to put on the costume and be someone else for 30 minutes.”

Frisina, on the other hand, challenges anyone who says cosplay has an unusually high commitment.

“It’s like any other hobby. Look me dead in the eye and tell me train set collectors aren’t equally irresponsible with their money. You’d be wrong,” Frisina said. “I make cosplays I could wear to school: some of them are completely normal clothes. I’ve started to go with more mundane cosplays because my parents have been getting on my back about that about how many clothes I don’t wear but own because of cosplay. But that’s the thing, because you can’t bring your trains to school. Oh, you’re a coin collector, that’s cute. Bring your coins to school.”

Clothes worn for the purpose of cosplaying make up approximately 25-30 percent of Zuniga and Frisina’s wardrobes. While this number may sound large at first, the two point out that that reaction reinforces another stereotype about cosplaying; that all costumes are loud or make a statement.

Cosplays are not necessarily canon outfits, which are those primarily worn by characters in a show. “Casual cosplays” are what a character would wear if they were in street clothes, or even what they would wear in the winter. This allows for a greater level of interpretation and a chance for the cosplayers to add some personal touches.

But on the other end of the spectrum are those who strive too much to look like a specific character. Photoshop is sometimes used to erase someone’s eyelids, thus making them appear more Asian. Skin is changed to look lighter or darker, all in an attempt to racially match a character.

“People say it’s a part of the costume and they want to be more accurate, which is the unfair imbalance of you telling darker skinned people that they’re not accurate because of something they can’t help,” Zuniga said. “It’s like telling me I’m not accurate because I’m not green. Except when you paint yourself gray, you’re not trying to assume anyone else’s ethnic heritage.”

It all depends on how a cosplayer measures accuracy, and in the cosplay community, that debate includes race, weight, and gender, all factors many fans cannot change. Both Zuniga and Frisina like to crossplay, which is when you cosplay as a character of the opposite gender.

“People like to point out that I’m not a guy, but I enjoy this character so I’m going to do it,” Zuniga said. “These expectations are unfair. Even though people are demonizing the oversexualized women, they’re like, ‘Her chest was out in the photo, so why did you change it?’ It’s a slippery slope both ways. You’re never going to be a 2D character so there is a point where you need to let it go and just say this is how it is in the real world.”

In the end, Zuniga knows it comes down to appreciating the media she loves.

“This is my interpretation of what this character would look like if they were me. You have to get into that mindset of it’s okay to be unique in that way. Because you will not ever be them, that’s to be expected, and that’s to be celebrated. That is the point of cosplay. To represent that person as best as you can or as much as you want to, because you want to.”