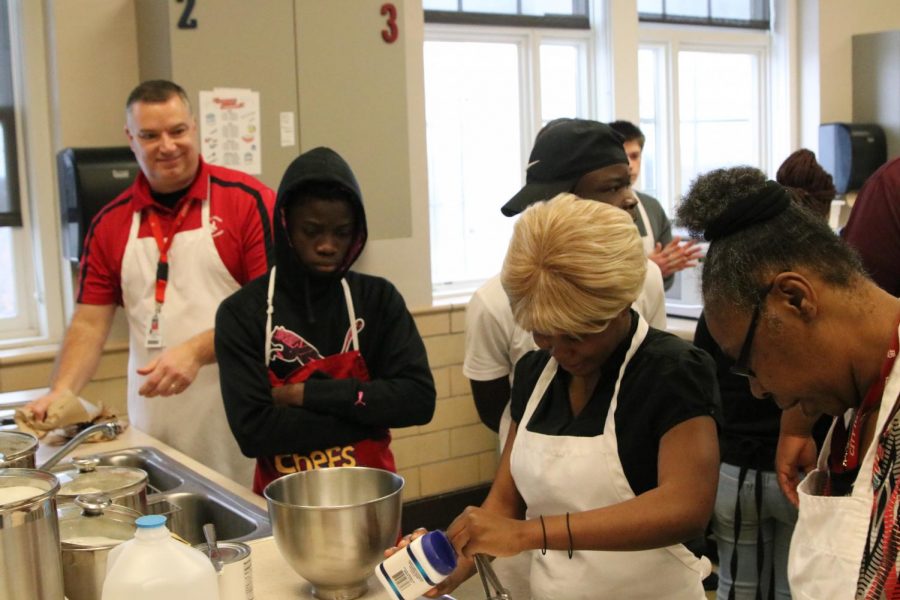 City High held a celebration of the life of Reverend Martin Luther King Jr. instead of holding regular classes on Friday. Students flocked to a plethora of activities and discussions about Civil Rights and the legacy of Dr. King.

Humanize My Hoodie – a movement based on the use of art to eliminate negative perceptions of minorities based on their clothing – was among the most popular, attracting around fifty students to screen print shirts. Some students also chose to leave campus to do volunteering activities, at places like Crowded Closet.

“So much of what Martin Luther King Jr. did was about giving back to his community. And the majority of the donations for crowded closet go back to charities worldwide, so it’s going back to the world as a community, but also locally,” Ryan Carter ‘20 said. “It was a lot of fun. It’s fun to go out and contribute something, even if you’re also hanging out with your friends. It’s cool to think ‘I did stuff there, and it helped people out.’”

Others chose to do Civil Rights trivia, or learn about the relationship between athletes and activism with Mr. Black, as well as the issue of media representation of minorities. Poetry was also a popular activity.

The Modern Civil Rights movement activity connected the 1960s Civil Rights movement to current movements, with discussions of disenfranchisement that non-white voters faced, as well as modern-day voter suppression. Students also discussed the effect of some crucial organizations and individuals, like Bayard Rustin and Ruby Sales, that are often not included in history books.

Panels and discussions were also a large portion of the sessions. Aiming to facilitate an exchange of ideas about community-wide issues, the activism panel had local activists speak to students. For the immigration discussion, students discussed the social webs that connected immigrants and non-immigrants and shared the personal experiences and struggles that they – or their parents – had experienced as a result of being immigrants, including differential treatment as a result of having an accent.

“My grandpa participated in activism in his country, Guyana, which helps me relate to what MLK did in terms of his activism,” Wayne Joseph ‘21 said.

Following an hour-long lunch break, Roger Lusala and Bruce Teague spoke at an assembly about the importance of giving back to one’s community, especially in the context of supporting black-owned businesses.

Another popular activity was watching movies, spanning from Dolores to Kirikou et la sorciére to The Hate U Give. Following each movie, there was a discussion of the content of the movie and its relation to Dr. King and his legacy.

One of the most popular events was hosted by Mr. Burkle, who discussed representation and equality in comic books at the Little Theater and showed Marvel’s Black Panther.

“I learned a lot about different comic books and characters that helped accentuate diversity in comics, an example of this being the X-Men who were really a cover for society hating on the minority population just because they are different from the rest and the minority’s responses to that,” Sam Horwitz ‘20 said. “I think that Black Panther helped me enrich my understanding [of MLK day] because it showed us an example of the successes of MLK. Black Panther is a prime example of how minorities are just as good if not better at a lot of things that the majority does not seem to want to give them credit for. The all-black cast with only a few supporting white characters really showed me how this sort of thing should be.”

In the Pop-Up activism activity, students identified issues important to them and considered specific ways to create change. Issues included disproportionate disciplining of black students within Iowa City, as well as the legality of conversion therapy for minors in many states.

“MLK was very passionate about activism and what he believed in, and that’s inspiring. He inspired others to make a change and do something, even though the times he lived in were tough,” Zola Kovach ‘21 said. “He knew it was dangerous and was literally murdered for it, tragically, but he still did it because he cared about people, which I think is amazing.”

Students were also eager to participate in activities about mindfulness. In room 3106, students formed a Talking Circle, a safe space in which they could share their ideas about many topics related to race.

“We talked about all kinds of racial issues and things involving race. It’s something that people give power to even though it is very simple. I learned it’s important to share different opinions and not judge people,” Cece Kelly-Harvey ‘21 said of the circle. “Ultimately, today is a day to commemorate somebody who did something very important for the United States. It’s a sign for change and of somebody not afraid to address problems that are happening.”