The two co-captains of the City High Debate team find success on their path to state. 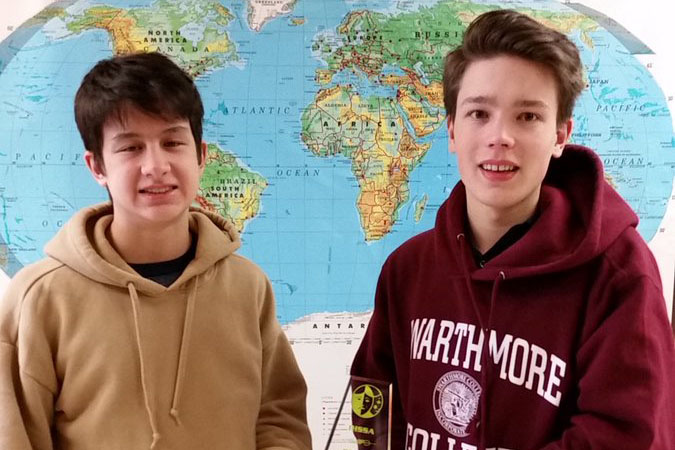 Ellis Chen '20 and Simon Weiss '20 pose with their trophy.

Crowded into classrooms at the Des Moines Area Community College, almost 15 debate teams, including those from Dowling Catholic and Cedar Rapids Washington high schools, debated each other for a preliminary tournament leading up to state. Little Hawk debaters Simon Weiss ‘20 and Ellis Chen ‘20 won second speaker and fifth speaker respectively. Chen believes this season has started off well, as he and Weiss have more experience compared to their first two years in debate.

“We beat some teams that I thought we wouldn’t be able to initially beat, so that made me really happy,” Chen said.

This year, the pair have taken on the role of co-captains. Although Chen says it took some time settling into his position, he believes that with the season’s progression, he has become more comfortable coaching younger members of the team.

“Initially, I was a little shy and sat in the back of the room and didn’t talk to the younger debaters,” explained Chen. “Now, I think I’ve started to get a little more comfortable and coach them whenever they have questions.”

The team has faced some large changes this year, starting with a switch in the head coach position. After coming back from a hiatus in debate coaching, Vince Woolums has returned to mentor the Little Hawks. The team is also looking to restart its program at Southeast Junior High in order to expose more students to debate at an earlier time.

Although the season has been long for Chen and Weiss, they have a slew of larger tournaments approaching.

“We have our state tournament in early March, and a couple of national circuit tournaments coming up in February where we are hoping to do well,” said Weiss.