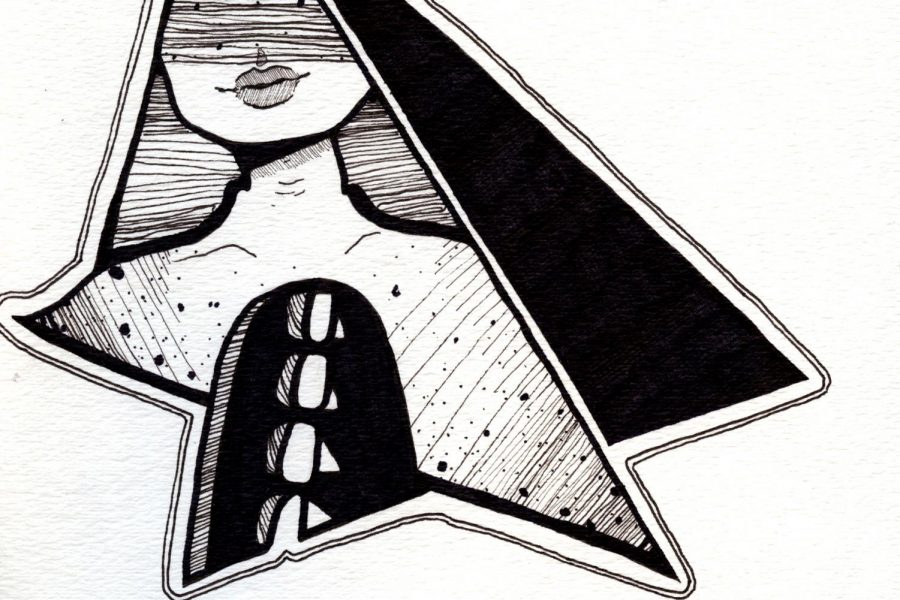 Ever since she can remember, Haileigh Steffens ‘22 has been drawing and doodling with supplies provided by her family. For Steffens, drawing is not only a way to pass time or have fun, but also a way to express herself.

“It was something that I have done since I was little and when I was super bored at home I would just draw. My uncle got me a set of markers that I used for a super long time,” Steffens said. “I also would just doodle and draw during school because I would get bored and then I met some of my friends who are into art so I suppose that reinforced my passion.”

As drawing with a pencil and paper is available anywhere and at almost anytime, Steffens finds it as the best outlet for her creativity. However, she does enjoy painting if she has an abundant amount of time.

“Mostly, I do just black and white drawing because I draw during class,” Steffens said. “If I really like something I will ink it. I will paint sometimes, but not very often because painting can take a long time and I don’t have much patience.”

Despite having multiple different art styles, doodling is still close to Steffens’ heart. Finding a passion for the simplicity of being able to take a pencil and any piece of paper and creating something, she predominantly stays to doodling.

“Doodling is just like a to-go thing that someone does, like say you’re in position that you’re in class and you’re bored so you just distract yourself by drawing,” Steffens said. “After a while it becomes really fun and then it just kind of becomes a hobby.”

One of Steffen’s closest friends, Grace Freerks ‘22, has been her greatest influence throughout her art career. When they first met, Steffens was inspired by Freerks experimentation and style. To Steffens, seeing someone who would do art simply because they wanted to try something new helped her expand her own art style.

“[I would say] Grace Freerks, I really like her style and she is doing all sorts of different things and just doing certain pieces of art just to experiment,” Steffens said. “Over the summer we would have days where we would just draw a lot.”

Steffens tends to follow a loose art process that helps her get her work done. She starts by letting the picture cultivate while she tactfully procrastinates. Eventually, once she feels the mood to do so, she will play a podcast and then virtuously draws out her master piece.

“I will start by procrastinating because that helps with creativity, and then I start making little sketches and I would see what has nice spacing, or what looks the best,” Steffens said. “Once they choose which one they like the best I will sit down to a nice podcast and then start sketching in pencil and then do it in pen or sharpie.”

As a necessary progression to her art career, Steffens has taken to commissioning her art. She has discovered that commissions give her a valid reason to focus and expand her art style. However, because of this, her art focus has shifted from working for herself to working for others.

“Going into high school I realized that if I wanted to keep art as a hobby, because I really like doing art, but with school being so demanding and having so many responsibilities, art had to become a responsibility for me to keep doing it, so lately I have been doing a lot of commissions but in the past I had never done that,” Steffens said. “With commissions it has given me a chance to explore different styles and things. They have have really just given me a chance to explore what I could be doing.”

A major patron of her work, Steffens focuses a good portion of her energy on making art for the Little Hawk. She has found that taking part as a Little Hawk artist has helped her both expand art style as well as giving her new and completely different objects to draw.

“So I really wanted to join the Little Hawk, but my schedule unfortunately wouldn’t allow me to do that, and so I wanted to get involved in a different way,” Steffens said. “I went and asked if they needed any art and almost immediately they contacted me wondering if I was willing to do this piece of art on shoplifting. This was just a whole new thing to me that I was really excited to do.”

Without taking up commissions, Steffens wouldn’t have been exposed to the different styles and subjects that people request. She most likely would have continued her art, but would have lacked the natural expansion that commissions have offered.

“I probably would have just kept to myself and [continued] doing doodles in class and I wouldn’t have really expanded my art style,” Steffens said. “I think it is really important as an artist, especially younger, to really explore and find out what you like to do and so going out and doing the little hawk was really cool.”

Despite changing the focus of her art to more of a commission basis Steffens does not fear the possibility of turning her art into a responsibility. Steffens views turning to commissions as a necessary but beneficial endeavor.

“If I have time my to go thing is to go to draw because I love it, but I during the year I realize that I will never have time unless I have a reason to,” Steffens said. “I don’t know what that says about me, but I know I really like drawing.”